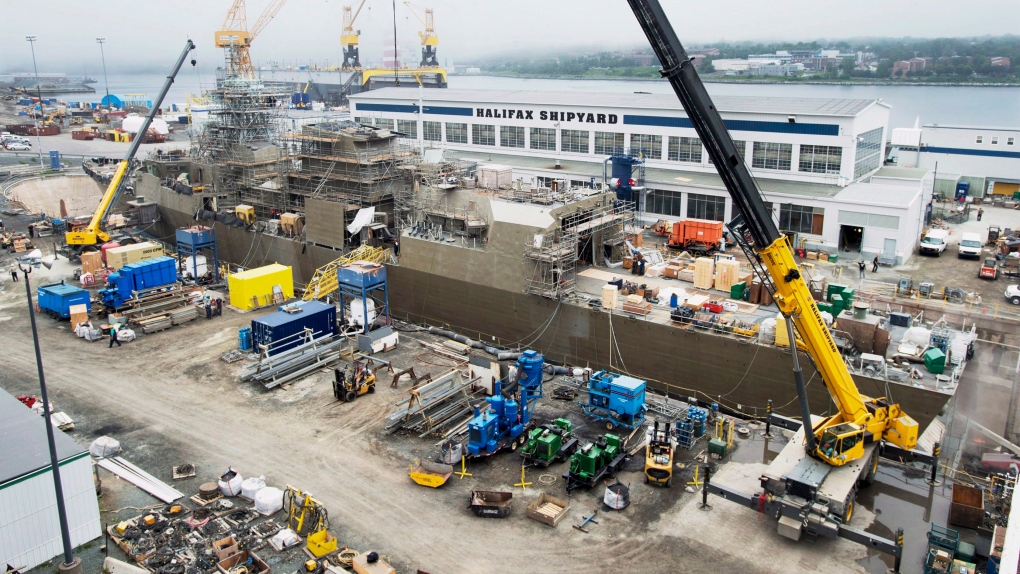 A Navy ship undergoes refitting at the Irving Shipbuilding yard, in Halifax, on July 3, 2014. (Andrew Vaughan / THE CANADIAN PRESS)

OTTAWA -- Halifax-based Irving Shipbuilding says it is in talks with the federal government over a looming gap in construction of two new fleets of ships for the navy, which the company warns could result in "significant layoffs" if left unaddressed.

The shipyard wants the government to give it additional work to make sure workers don't sit idle between when the first fleet of Arctic patrol vessels is finished and work begins on the second fleet of much larger warships.

Work on the Arctic patrol ships is expected to wind down in 2019.

Construction of the warship fleet -- which will replace the navy's frigates and destroyers -- won't start until at least 2021.

Irving president Kevin McCoy says they are anticipating a construction gap and looking to the government for help in filling it in order to stave off job cuts.

McCoy's comments underline the real costs of years of debate, delays and hand-wringing over the multi-billion-dollar warship project, in particular, which is the single largest military procurement project in Canadian history.

"We know there is going to be some kind of a gap, and we're looking at the government about what makes sense for work during that period," McCoy said in an interview Thursday.

McCoy later told the House of Commons defence committee that the gap could result in "significant layoffs."

The surprise suspension last month of the military's second-highest-ranking officer has thrown another potential wrench in the mix. Vice-Admiral Mark Norman was deeply involved in the warship project in his previous role as commander of the Royal Canadian Navy.

Defence Minister Harjit Sajjan has said Norman's suspension was not related to national security, which has left many questioning whether there was any link to the federal government's shipbuilding plan.

McCoy said Irving does not know why Norman was stripped of his duties as vice chief of defence staff on Jan. 16, but he maintained it has not had any impact on the work the shipyard is doing.

"We have not been notified. We have no knowledge. Nor is it impacting any of the procurements that we're leading," he said. "We are pressing forward."

Irving currently has about 850 employees working directly on the Arctic patrol vessels, McCoy said, many of whom were recruited and trained specifically for the federal shipbuilding program.

Not only would a gap mean no work for many for an extended period of time, McCoy said there is the risk some will leave Halifax and Canada for jobs elsewhere.

"If we have a downturn in employment and they decide to leave, then we're going to have to replace those folks," he said. "New training, new recruiting and that will be a cost to the (warship program)."

Irving recently pitched the idea of building a ship specifically designed to respond to humanitarian crises, while McCoy said the company would like a maintenance contract for the navy's frigates extended.

The current maintenance contract expires in 2018, but McCoy said the company is well-positioned to continue, given that it recently completed a major refit of the frigate fleet.

Irving recently bid for a $5-billion maintenance contract for the Arctic patrol vessels and the navy's new resupply ships, but industry insiders say French defence giant Thales was selected as the winner.

In response to McCoy's comments, a spokeswoman for Public Procurement Minister Judy Foote reaffirmed the economic goals of the federal shipbuilding strategy.

"The National Shipbuilding Strategy was designed to eliminate the boom and bust cycles that dominated the industry in the past," spokeswoman Annie Trepanier said in an email.

"The NSS is a long-term commitment to shipbuilding that will rejuvenate our marine industry, support Canadian technological innovation, and bring jobs and prosperity to many communities across the country."

Irving was selected in 2010 to construct between six and eight Arctic patrol vessels for $2.3 billion and 15 warships, known in defence circles as Canadian surface combatants (CSC), for $26 billion.

Both projects have since been amended due to scheduling and cost issues. Irving is now committed to building five Arctic ships, though it may add a sixth. McCoy said that decision will come at a later date.

Meanwhile, the Liberal government said it would not discuss a price or how many warships it will buy until more information is available, after documents showed they could cost $40 billion.