HALIFAX -- As the Northwood long-term care home in Halifax sees three more deaths related to COVID-19, the province is defending the response to the outbreak at the facility.

Forty-one people have now died from COVID-19 in Nova Scotia; 35 of those deaths have been at Northwood, which has seen the most significant outbreak of the coronavirus in Nova Scotia.

“COVID-19 continues to take a toll on our province … this is a wretched disease and I am sorry to the families for your loss,” said Premier Stephen McNeil during a news conference in Halifax Tuesday afternoon.

“The virus has been in for about six weeks and now we need to continue to do everything we can to get that virus out of Northwood.”

An additional long-term care home in Nova Scotia is also now affected by the coronavirus, but the province hasn’t said which one.

Chief Medical Officer of Health Dr. Robert Strang said that, of the 245 residents who tested positive for COVID-19, 46 have recovered and 39 have died, with 160 active cases remaining. Strang said all 160 residents with active cases are at Northwood.

As of Tuesday, Northwood was reporting a total of 314 confirmed cases at its Halifax campus, affecting 226 residents and 88 employees.

Twenty-six residents have recovered from the virus and have moved to an off-site recovery unit.

Despite the growing death toll, Strang insisted that Northwood took all the steps it could have taken to prepare for the pandemic, based on the information it had at the time, and is currently taking all the necessary steps to bring the situation under control.

“The initial response by Northwood was entirely appropriate, based on best practice around long-term care and infection control and outbreak management,” said Strang.

“The appropriate protocols were being followed, continued to be followed, and we’ll continue to support Northwood as necessary.”

He said the first cases were detected among staff on April 5, and the first five cases involving residents on April 7.

“It was initially felt that the outbreak was able to be managed appropriately, but on April 17 they understand that they were becoming overwhelmed and they reached out to the Department of Health and Wellness for help,” said Strang.

“There was an immediate response from the rest of the health system and across government to put in the necessary supports to be able to develop and implement the emergency plan that was necessary.”

Strang also insisted that there has always been a sufficient supply of personal protective equipment (PPE), such as masks and gowns, to manage the outbreak.

He noted that Northwood, which is the largest long-term care facility east of Montreal, has faced unique challenges due to its size.

“It has almost 600 residents and 400 staff. Many of the residents there are very frail and elderly, like other long-term care facilities, but making them very vulnerable to the virus,” said Strang.

He also said that Northwood’s Halifax campus is an older building and many residents live in shared rooms, which makes it easier for the virus to spread.

“Once COVID-19 was introduced, it was able to spread significantly throughout Northwood before any cases were detected, and before we were even aware there was an outbreak going on,” said Strang.

“I don’t want people to think that nothing was being done. We were doing everything that was entirely possible to prevent and then respond to the outbreak."

The province also reported six new cases of COVID-19 on Tuesday, bringing the total number of confirmed cases in Nova Scotia to 991.

To date, there have been 30,984 negative test results.

Six people are currently in hospital, two of which are in the intensive care unit.

The province says 652 people have now recovered from COVID-19 and their cases are considered resolved.

There are cases across the province, but most cases have been confirmed in the Nova Scotia Health Authority's central zone, which contains the Halifax Regional Municipality.

The six new cases announced Tuesday were all confirmed in the central zone. The western, northern and eastern zones are seeing no additional cases at this time. 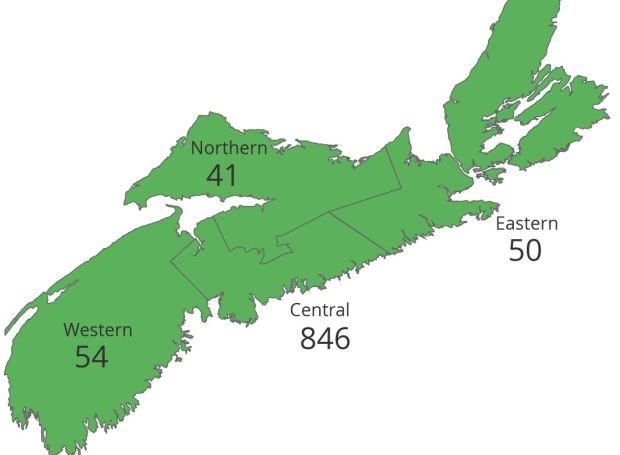 U.S. scientist says he was fired after concerns over malaria drug

Showing emotion no longer taboo for political leaders during pandemic

People are being warned not to microwave their face masks