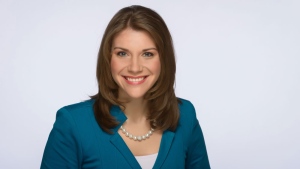 Kayla Hounsell is a reporter for the CTV News at 6. She joined the CTV Atlantic team in 2009 and very quickly worked her way up to the anchor desk, taking on the role of anchor and producer of the weekend edition of the CTV News at 6.  She held that position for two years before returning to the field last year to focus on her first love - reporting. She continues to serve as backup anchor for Steve Murphy.

A proud Newfoundlander, Kayla left home for a post-secondary education at Carleton University’s School of Journalism. While at Carleton, Kayla spent two months in Africa training journalism students at the National University of Rwanda.  This year she travelled back to Africa to work on behalf of CTV with Journalists for Human Rights.  .

Before landing in the Maritimes, Kayla worked as a reporter/anchor in Ottawa, Manitoba and Saskatchewan. An East Coast girl at heart, Kayla is thrilled to call Halifax home.

Kayla moves easily between reporting and hosting.  While continuing to hone her skills on the desk, she has also taken advantage of educational opportunities outside the newsroom. In 2013 Kayla was named the RTDNA President’s Fellow and was subsequently awarded a scholarship to the Poynter Institute for Media Studies in St. Petersburg, Florida where she attended an intensive week-long reporting course.

When she isn’t chasing news, Kayla is likely to be found with her nose in a book, checking out Halifax’s many great coffee shops and restaurants or hanging out at the yoga studio.