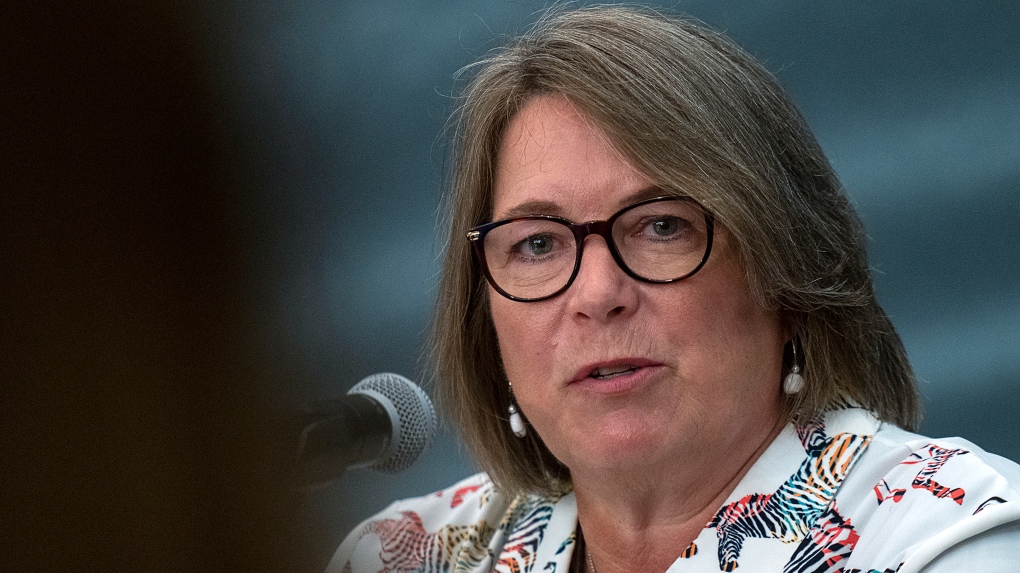 An affidavit by an RCMP security investigator details how the force obtained recordings of a tense meeting at the centre of allegations of political interference into the Mounties' investigation into the Nova Scotia mass shooting.

The affidavit sworn Friday by Supt. Jeffrey Beaulac, the RCMP's deputy chief security officer at national headquarters in Ottawa, was released Tuesday by the public inquiry into the April 18-19, 2020, shootings that claimed 22 lives.

The 24 minutes of conversation were recorded on April 28, 2020, during a call between RCMP Commissioner Brenda Lucki and senior RCMP staff in Halifax.

Beaulac said that in June, senior management learned that the RCMP's director of media relations, Dan Brien, had recorded at least part of the call.

"I am informed that on June 24, 2022, Chief Supt. Michael O'Malley was told by Mr. Brien that the recording was done on a personal device and it was no longer available as it was on an old phone that had been stolen," said Beaulac.

He said Brien's direct manager Jolene Bradley also discussed the recording with him and another national communications services manager.

"She was told by Mr. Brien that the recording was done in error and it was not his common practice to record meetings. He stated the call had been recorded on a personal device that he no longer had use of."

Beaulac said he was informed that Brien went on sick leave on July 7 and has not returned to work. He said the RCMP subsequently undertook a security review and an administrative review.

"As of today's date, the recording of the April 28, 2020, call has not been located during these searches of the RCMPs technical infrastructure," he said.

Brien said the recording had not been made on a phone that was stolen from him, but the affidavit says "he may have thought so" in June because he did not remember when the theft occurred.

Brien subsequently agreed to have the phone forensically examined and gave his permission to do so on Oct. 12. The next day, Beaulac said he was advised that three audio files had been retrieved concerning the April 28 call. The commission of inquiry was advised on Oct. 14 and was given the recordings on Oct. 17.

Beaulac said the RCMPs security investigation into the matter is ongoing.

"While the files do not cover the entirety of the meeting, they are a complete capture of what the (Digital Forensic Services) extracted from Mr. Brien's phone," he said.

The recordings did not come to light until September, when RCMP Deputy Commissioner Brian Brennan told the federal-provincial inquiry in Halifax that Brien had recorded portions of the meeting.

During the call, Lucki said she understood the police force couldn't release certain details about the investigation into how the gunman killed 22 people during the 13-hour rampage.

However, she said she felt frustrated when she learned the speaking notes used for an RCMP news conference earlier that day did not include basic information about the killer's weapons.

She can be heard saying her desire to publicly share these basic facts was in response to a request she received from a minister's office, though she did not specify which minister or the exact nature of the request.

Opposition parties seized on the comments to suggest the Liberal government was interfering in the police investigation to further its pending gun control legislation, something Prime Minister Justin Trudeau has denied.

This report by The Canadian Press was first published Oct. 25, 2022.

Nestle Canada says it is winding down its frozen meals and pizza business in Canada over the next six months. The four brands that will no longer be sold in the freezer aisle at Canadian grocery stores are Delissio, Stouffer's, Lean Cuisine and Life Cuisine.

Six more weeks of winter? Here are the predictions of groundhogs across North America

Will we see six more weeks of winter, or an early spring? Here’s what some of the groundhogs (and one human) have predicted so far, from coast-to-coast.

'Dances With Wolves' actor appears in court in abuse probe

A former 'Dances With Wolves' actor accused of sexually abusing Indigenous girls and leading a cult must remain held without bail until his next court hearing, a judge ordered Thursday morning.

The United States has answered President Volodymyr Zelenskyy's plea for rockets that can strike deep behind the front lines of the nearly year-long conflict with Russia. Now Russian forces will need to adapt or face potentially catastrophic losses.

Former Wagner commander says he is sorry for fighting in Ukraine

A former commander of Russia's Wagner mercenary group who fled to Norway told Reuters he wanted to apologize for fighting in Ukraine and was speaking out to bring the perpetrators of crimes to justice.

Justice Minister David Lametti says he will "look at" a federal policy that restricts gay and bisexual men from donating to sperm banks in Canada, after CTV News exclusively reported on Wednesday that a gay man is taking the federal government to court over it.