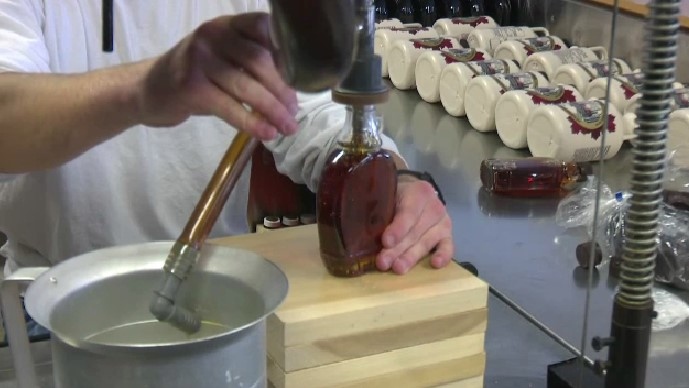 As the third largest maple syrup producer in the world, New Brunswick has a big hold on the market.
FREDERICTON -

Maple syrup producers in New Brunswick are pushing the provincial government to respond to their request for more Crown land on which to expand production and meet a growing global demand for their products.

Producers have been waiting two years for the government to respond to a request for an additional 12,000 hectares of Crown forest, Louise Poitras, executive director of the New Brunswick Maple Syrup Association, said in a recent interview.

The extra land requested by the association represents about 0.4 per cent of total Crown land in the province, Poitras said. "There's a thriving economy there for our maple syrup industry in New Brunswick. We are just asking for our fair share."

The demand for maple syrup is growing, she added. New Brunswick's maple syrup industry had a record year in 2021, producing 10 million pounds of maple syrup. It was all sold by September, indicating there is demand for more, she said.

New Brunswick is the world's third-largest maple syrup producer, behind Quebec and Vermont.

While the industry waits for a response from government, forestry companies are clear-cutting near existing sugaries, Poitras said.

"Once you cut into them, there's less maple syrup to harvest," she explained. "We need an answer from the government."

The Department of Natural Resources said in a recent statement it is pleased the maple syrup industry is growing, but it said the request for more land is still being evaluated against other land uses.

"We are working to advance this file, which will include consultation with First Nations and further discussion with industry," spokesman Nick Brown wrote in an email.

"Approximately 14,000 hectares (three million taps) are leased in New Brunswick and in 2015, we approved the expansion of 4,400 hectares for maple syrup production and the benefits are starting to be seen now," Brown said.

This report by The Canadian Press was first published Feb. 7, 2022.

Patrick Brown has been disqualified from the federal Conservative leadership race, after ballots have already begun to be mailed out, and his campaign is fighting back against what it calls anonymous allegations.

Parents of boy, 2, among dead at Fourth of July parade shooting

Aiden McCarthy's photo was shared across Chicago-area social media groups in the hours after the July 4 parade shooting in Highland Park, accompanied by pleas to help identify the 2-year-old who had been found at the scene bloodied and alone and to reunite him with his family. On Tuesday, friends and authorities confirmed that the boy's parents, Kevin McCarthy, 37, and Irina McCarthy, 35, were among seven people killed in the tragedy.

Despite fears of arrest, some Russians refuse to halt war protests

Despite a massive government crackdown on protests against the war in Ukraine, some Russians have persisted in speaking out against the invasion.