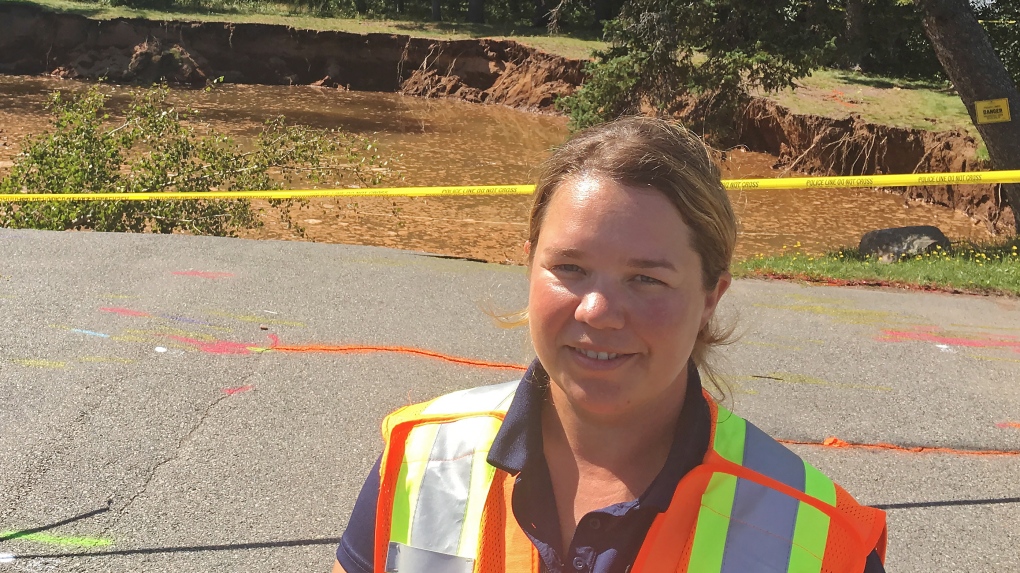 Nova Scotia Regional Geologist Amy Tizzard poses in front of a sinkhole in Oxford, N.S. on Monday, September 3, 2018. A large sinkhole in a sleepy Nova Scotia town appears to have stopped growing, at least for now, as officials continue to monitor the situation. (THE CANADIAN PRESS/Rob Roberts)

OXFORD, N.S. -- Officials report new cracks have appeared in the pavement near a large sinkhole that has taken over a Nova Scotia park.

The Town of Oxford said the cause of the cracks is unknown, and officials will keep a close eye on the sinkhole's conditions as rain is forecast for later this week.

The sinkhole first appeared in mid-July, but has since grown to a size larger than 32.6 metres by 38.7 metres, swallowing up trees and picnic benches and drawing curious onlookers to the small town of about 1,000.

Amy Tizzard, a regional geologist with the provincial Department of Energy and Mines, said last week that the sinkhole's growth has slowed, but that could change at any time.

The town said Tuesday that ground-penetrating radar will be tested on site next week, as officials weigh options for larger-scale surveying methods.

The town has previously said that cracks in the parking lot might expand to affect the nearby road, alerting the public that travel routes may need to change.