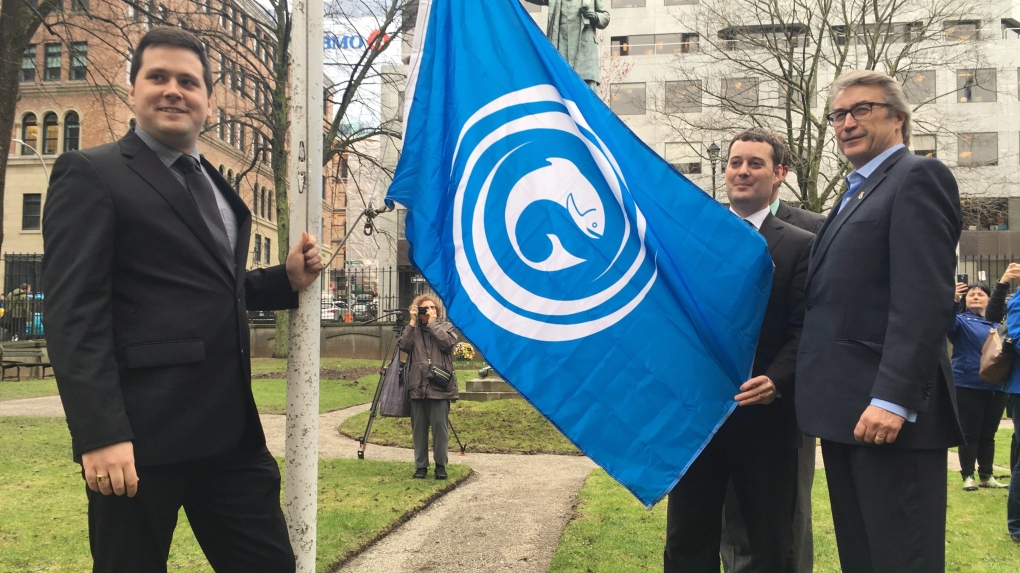 President of the Gaelic Council of Nova Scotia, David Rankin, left to right, minister of Gaelic Affairs of Nova Scotia Randy Delorey and MLA Hugh MacKay pose next to a Gaelic flag in Halifax, on Tuesday, May 1, 2018. (THE CANADIAN PRESS/Fadila Chater)

HALIFAX -- Nova Scotia is getting a new Gaelic licence plate, part of the provincial government's effort to expand use of the language.

The plate -- which includes the province's Gaelic name, Alba Nuadh -- will be made available for purchase later in May, with proceeds going to Gaelic language and culture initiatives.

"This will allow more people to reconnect with their language, culture and heritage and to preserve these for the next generation," Delorey said at Province House.

It's part of Gaelic Affairs of Nova Scotia's effort to raise cultural awareness and the number of Gaelic speakers in the province, said David Rankin, president of the Gaelic Council of Nova Scotia.

"There is a third of the province that has Gaelic ancestry and there are many people who want to learn and want to engage in our culture," Rankin said in an interview.

The province says an estimated 2,000 people speak Gaelic in Nova Scotia, where about 230,000 people are descendants of Gaelic settlers.