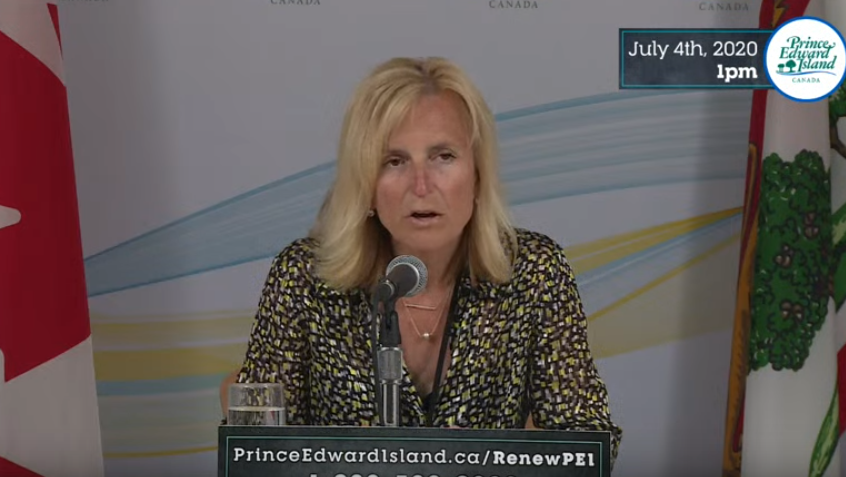 P.E.I.'s Chief Public Health Officer, Dr. Heather Morrison said in a news conference on Saturday that none of the three new cases are related to seasonal travel or the Atlantic Bubble.

HALIFAX -- Prince Edward Island is reporting three new cases of COVID-19 on Saturday.  These are the first cases reported on the island since April 28.

“This is disappointing news, but we have said consistently that we need to be prepared for more cases, and we are,” said Prince Edward Island’s Chief Public Health Officer Dr. Heather Morrison.

Morrison said in a news conference on Saturday that none of the three new cases are related to seasonal travel or the Atlantic Bubble.

One of the new cases involves a man in his 50s, who is an essential worker that recently travelled outside of the region. He has self-isolated at home since returning to the province.

The other two new positive cases involve two people in their 20s, who are believed to be connected, according to Morrison.

“One case is related to travel to Nova Scotia where he had contact with someone from the United States. He is asymptomatic,” said Morrison.

The third positive case involves a woman who was in close contact to the man in his 20s. Morrison said she works at a senior home called Whisperwood Villa in Prince Edward Island, and recently worked at the home.

“She did wear appropriate PPE while working, and does not provide direct personal care to residents. She left work as soon as she wasn’t feeling well,” said Morrison.

The island’s top doctor said they have made initial contact with the senior’s home on Friday, and are working closely with them to avoid further exposure.

“As a precaution, steps are being taken to test all residents and staff of the Whisperwood Villa beginning this afternoon. Staff will be contacted individually regarding the process to get tested, and resident testing has already started,” said Morrison.

Morrison also added that she’s been told none of the residents at Whisperwood Villa have any new symptoms of COVID-19.

Anyone who visited Whisperwood Villa on Tuesday, June 30 is also also being asked to get tested as an extra precaution.

Whisperwood Villa is restricting more of its guidelines due to the new cases of COVID-19.

“We have been advised that all indoor and outdoor visits are cancelled until further notice, and there will be no communal dining.  The frequency of resident temperature checks will increase to twice a day, in addition to twice daily screenings,” said Morrison.