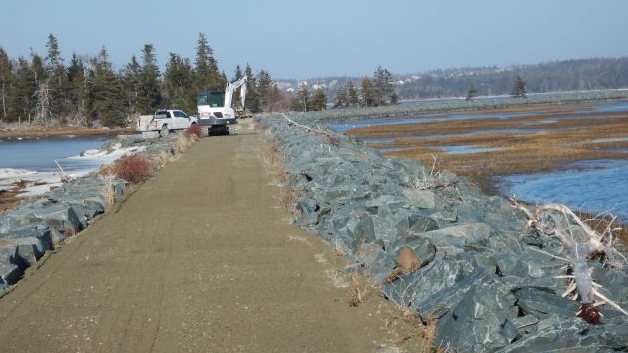 HALIFAX -- A popular multi-use trail in Cole Harbour, N.S. is closed for repairs to storm damage caused by Hurricane Dorian.

The Salt Marsh Trail is part of The Great Trail and spans 6.5 kilometres from Cole Harbour to Lawrencetown. A section of the gravel trail is built on a salt marsh, which is flooded twice daily by rising ocean tides from nearby Rainbow Haven Beach.

“This work we’re doing here, we call it the Dorian repair work,” said Michael McFadden, the chair of Cole Harbour Parks and Trails Association (CHPTA). “It’s to bring the surface back to a reasonable level so that everybody can have access to it.”

The CHPTA’s group of volunteers build, maintain and operate trails in Cole Harbour, including the Salt Marsh Trail. McFadden said more than 30,000 people use the trail annually.

Hurricane Dorian blew through Atlantic Canada on Sept. 7, 2019. It made landfall in Nova Scotia as a post-tropical storm, leaving a trail of destruction in its path.

When storms hit, the Salt Marsh Trail is exposed to powerful storm surge.

“It’s basically like a beach, but the beach is only three metres wide so it’s getting that sort of erosion from both sides,” said McFadden.

The CHPTA has an engineering program that supports both sides of the trail to keep it from getting washed out. They use a combination of gravel, large rocks and plants to protect the trail from the elements.

“What happened during Dorian is there’s a section of that trail that goes across Cole Harbour and it wasn’t completely fortified,” said McFadden.

The trail was closed for six days following Hurricane Dorian. It was re-opened after some repair work, but there were still sections of the trail not accessible to people with mobility issues. McFadden said these repairs will address that.

“We pride ourselves in taking into account that we have to make things accessible to as many people as possible whatever their challenges,” said McFadden.

In order to do the repairs McFadden said the association applied for emergency funding from the Halifax Regional Municipality and the Trans Canada Trail Foundation (TCT). It received $13,000 from the city’s Active Transportation Fund and $12,500 from the TCT Foundation.

“This was obviously above and beyond what we had planned to have happen in maintenance and in capital work,” said McFadden.

The CHPTA is also kicking in money it received through private donations and rebates.

Work on the trail began Monday and was expected to last well into next week, but crews have been making steady progress.

“We think that by Sunday all the sort of heavy work for the time being will be done. And the trail will be re-opened,” said McFadden.

Once the Dorian repair work is done, McFadden said the association plans to continue re-rocking the sides of the trail with large boulders and adding some plants.

That work is expected to happen over the next couple years.