Putters, protests and politics: The battle over a golf resort at Owls Head 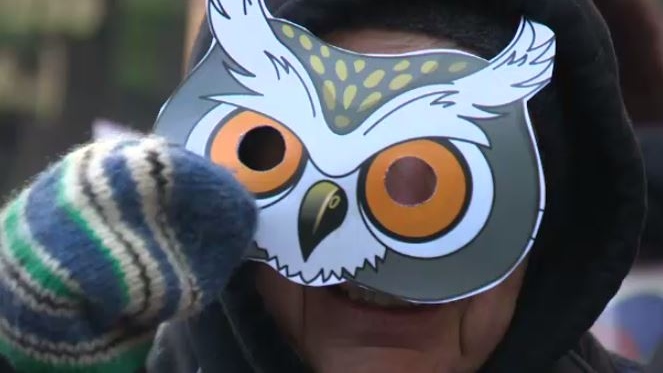 A protester dons an owl mask at a demonstration outside the Nova Scotia Legislature on Thursday, Feb. 20, 2020.

HALIFAX -- Even as an American developer appears to be re-thinking a proposal to build a high-end golf resort on Crown land in Nova Scotia, protesters went ahead with a planned demonstration outside the legislature, while the Liberal government defended the idea inside.

"It's something that would bring people who would otherwise probably wouldn't be coming to Nova Scotia into the province and into our area," said Liberal MLA Kevin Murphy, the first Speaker of the House from the riding of Eastern Shore.

"I think it would be a good fit, but having said that, any proposal has to go through due process, and meet all the rules and regulations of the various departments and levels of government involved. I think that's what the proponent was trying to do."

Murphy spoke to reporters as the House resumed sitting Thursday, responding to a sizable protest outside the building. About 100 demonstrators braved a windchill of -15 to demand the province reinstate the 285-hectare parcel of Crown land at Owls Head as a protected area, awaiting legal protection.

The issue made headlines just before Christmas when it was revealed the land had been quietly removed from the list, and an American couple, Beckwith and Kitty Gilbert, planned to buy it and build as many as three golf courses in the area.

The proposal prompted an immediate backlash because the area includes coastal barrens and wetlands.

Groups including the Canadian Parks and Wilderness Society say the Owls Head coastal headlands contain rare coastal ecosystems and a habitat for species at risk, such as the piping plover.

A Facebook group created Dec. 19, Save Little Harbour/Owls Head From Corrupt Backroom Deal, had more than 3,150 members as of Friday.

Chris Trider, a former provincial park planner and a member of the group, organized the rally.

"We feel that the whole process has been wrong from the outset," Trider told CTV News.

"We only learned about it in December. It had been on the go since March, and we want this government to know there are a lot of people who are concerned about this -- the threat it poses to all the protected properties in Nova Scotia, and the way it was done. It's just wrong."

"This terrible new betrayal of Nova Scotians joins a long list of other secret business deals to sell out Nova Scotia," said  Burrill, to cheers from the crowd.

He vowed the party would introduce legislation that would ban the de-listing of public lands in secret.

"This is an environmental issue -- a global issue, actually -- and Owls Head is emblematic of what's happening all over this province and all over this country, and in fact, all over the world," Barrs said.

"We've already used up 75 per cent of the earth's surface, so I'd like to see some of it saved for our grandchildren."

The rally went ahead as scheduled, despite suggestions from the Gilberts the day before the plan may be off the table.

In a statement released from their lawyer and obtained by CTV News, the couple said they "have decided to take some time to explore multiple options for their existing properties in Little Harbour, Nova Scotia."

The statement says the proposed Lighthouse Links golf development was intended to preserve the natural beauty of the area, while creating employment opportunities within an envisioned "eco-tourism destination."

"They will continue to discuss possible options for the lands with the federal and provincial governments, the Little Harbour community, and will have continued discussions with environmental groups", the statement concluded.

"I've read and re-read that statement, and I don't know that it really says all that much," Trider said.

"I found the timing of it very suspicious -- the evening before our rally, and I don't see that changed fundamentally that process or what happened with this government.  It's just absolutely terrible."

But Nova Scotia's Minister of Lands and Forestry said he hadn't received any official word that the couple were backing away from the plan.

"We'll be reaching out to see if they want to terminate the letter of offer that's there that has our conditions in place -- or if there is something else they had in mind," said Iain Rankin, adding he believes the project has plenty of support in and around Owls Head.

"So I'm pleased to see that the developer does want to continue to engage with the public on the matter, and environmental groups, so we'll see what the outcome is of that," Rankin said.

Either way, the minister appeared to dismiss demands to reinstate the land as a protected area.

"At this juncture, it was removed from potential protected areas, and there's no plans to change that," he said.

"My takeaway is that it's not finished," said Murphy, adding he was a bit surprised by the backlash unfolding outside the legislature.

"I'm in the community regularly, and from what I hear, the local residents are very supportive of trying to do something. They'd like to turn their community around and they have faith in Mr. Gilbert, and they'd like to see something happen."