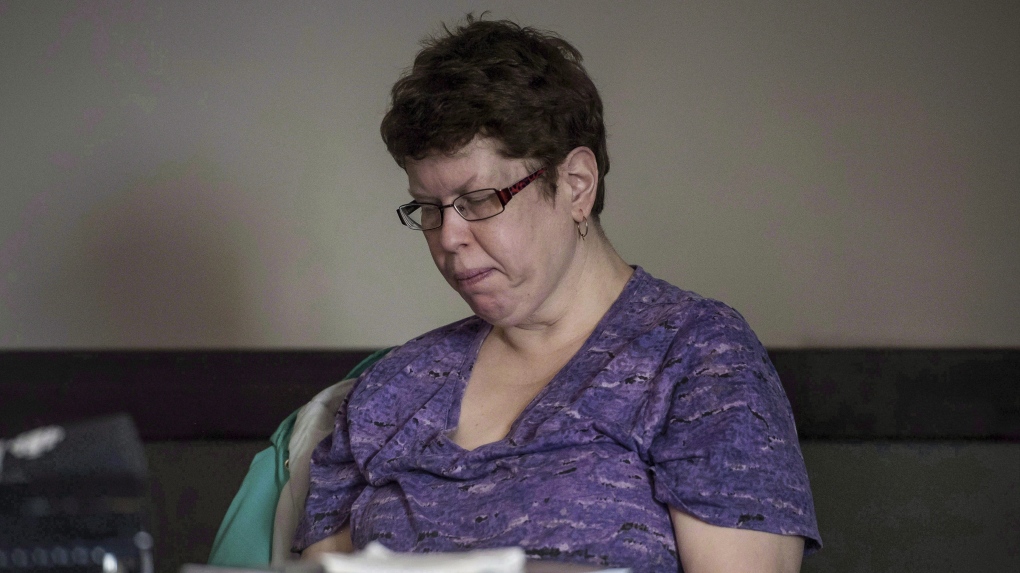 Beth MacLean, the woman at the centre of a human rights case dealing with persons with disabilities and their attempts to move out of institutions, pauses while testifying at an inquiry in Halifax on Tuesday, March 6, 2018. (THE CANADIAN PRESS/Darren Calabrese)

HALIFAX -- A public servant in charge of the overhaul of Nova Scotia's programs for people with disabilities defended the slow pace of change Thursday at a human rights hearing.

Lynn Hartwell, the deputy minister of the Department of Community Services, testified that slowdowns in a 10-year plan are partly because civil servants must ensure peoples' wishes are respected and their safety ensured.

"These aren't my risks to take," she said during Day 33 of the inquiry.

"We have individuals and their families who want to be part of what's going on and want to have a say in the pace (of change) and what the options are for them."

Two people with intellectual disabilities, Beth MacLean and Joseph Delaney, have alleged Community Services violated the Human Rights Act by forcing them to remain at the Emerald Hall psychiatric ward in Halifax for over a decade, even though they had been medically discharged.

The human rights complaint, made in 2014, argued they should have been provided housing in a "small options" home.

Small-options homes are small housing units, usually with three or four residents, where people with intellectual and other disabilities get day-to-day support to allow them to live in their community.

Hartwell says since 2013 -- when a "roadmap" to change the system was set up -- the department has moved about 120 people from larger facilities to other options in the community where they have more control of their day-to-day lives.

However, the department has also said in emails that 1,500 people with disabilities are either awaiting some form of support from the Department of Community Services, or awaiting a transfer to a different housing option or location.

Hartwell testified that about nine out of 10 of people being supported by the department's programs are in some form of independent living, or in smaller facilities and group homes.

However, there are still about 550 people living in larger, hospital-like centres known as adult residential centres and regional rehabilitation centres around the province.

During her testimony, Hartwell said that several small options homes are now being prepared, as plans continue for the eventual closure of two of the larger facilities -- the Quest centre in Halifax and the Breton Ability Centre in Sydney.

She said the movement of people into the community is a complex process, which may mean people in small options facilities shift to living in their own apartments, opening a space.

The civil servant said there are even cases where people who live in large facilities leave each day to work outside the facility, or people living in their own apartment visit the larger centre to see friends and participate in programs.

As she described the shifting of people among facilities, Hartwell said it isn't wise to set up a firm deadline for closure of the larger centres without a clear plan in place.

"I think one of the worst things that could happen would be to create a sense of panic among people who already have challenges in their lives that something is going to happen that they won't have any say in, or have any control over," she said.

However, the 2013 reform plan explicitly recommended a "reduced reliance" on the large centres and to ensuring people with disabilities "have access to the full range of affordable and accessible housing in the community that is available to all Nova Scotians."

The plan created by the former NDP government called for a five-year time-frame for the planning and groundwork to "transform the system of services to persons with disabilities," but added, "we understand that the full transformation will likely take a decade of change."

Hartwell said there's a commitment to build eight small options homes, with one a renovation in New Glasgow, with two others now in planning stages in the Acadian communities of Clare and Isle Madame.

Each home has a particular purpose, with one for middle-aged women and another for younger men with behavioural challenges, she testified.

Hartwell also said it has taken time to develop standards for small options homes to ensure they suit the needs of clients and meet basic quality control standards.

"Things like having adequate common areas, adequate private areas ... We want to make sure when we're creating small options we've learned from our own experience and the experience of others."

The complaint before the inquiry also includes the story of Sheila Livingstone, a woman in her late 60s who died after being transferred to a facility in Yarmouth -- 300 kilometres from her family -- more than a decade after she was placed in the Nova Scotia Hospital.