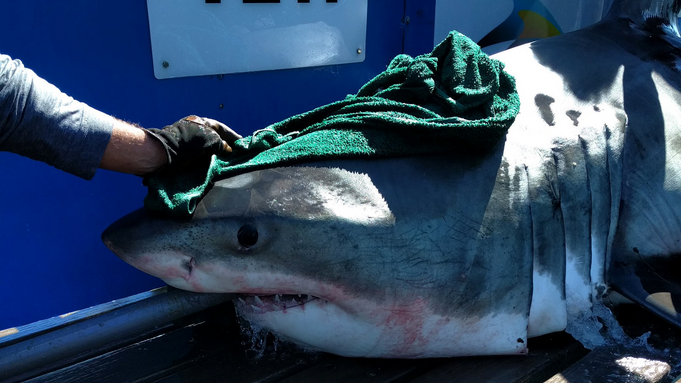 The official Ocearch Twitter account posted a photo on Monday afternoon of the male shark, named Nova, that was tagged off the south shore of Nova Scotia. (Ocearch/Twitter)

The official Twitter account of the Ocearch research organization posted a photo on Monday afternoon of the male shark, named Nova, that was tagged off the south shore of Nova Scotia.

One of Ocearch's other tagged sharks, an adult male named Hilton, has a made a splash in Nova Scotia for his wry Twitter feed that tweets out his movements to 46,000 followers.

Hilton introduced his followers to his new friend on Monday from the handle (at)HiltonTheShark: "He's a bit smaller than me but from what I hear, he's a pretty cool dude."

Hilton has made return trips to Nova Scotia over the past year, suggesting he was here seeking a mate -- a pattern that drew Ocearch's researchers to the area.

The team made up of U.S. and Canadian researchers started their work in Atlantic Canada last week, trying to shed more light on the migratory patterns of the mysterious creatures.

"We're up here trying to solve the puzzle of the North Atlantic white shark population," Dr. Bob Hueter said in Lunenberg, N.S., last Thursday, ahead of the expedition's launch.

Scientists say the discovery of a Canadian mating site could be key to protecting the ocean predators that are listed as endangered in Canada's Species At Risk Act.

Ocearch founder and the expedition leader Chris Fischer said in an interview with The Canadian Press last week that white sharks are known to mate around Nantucket, Mass., and give birth off the south shore of Long Island, N.Y.

But Hilton and a female tagged shark named Lydia didn't go to those areas, which Fischer said indicates they may be spending their time mating in other areas.

Earlier this month, federal scientists on a separate mission successfully tagged a great white shark in Atlantic Canadian waters for the first time.

Ocearch was founded in 2007, when there was little documented science on the North Atlantic white shark. Since then, the group has tagged 37 white sharks, aiming for an eventual 60.

Fischer said learning more about the sharks' patterns will help maintain the overall health of the ecosystem, since the apex predators help manage other species.

"Sharks are the lions of the oceans - they're the balance keepers."

We just tagged our first ever white shark in Canadian waters! Everybody meet @NovaTheShark. Nova is a male who’s just over 11ft long. We tagged him off the beautiful South Shore of Nova Scotia. #NovaScotiaExpedition pic.twitter.com/Wm3iBdYUk3

Our first white shark tagged in Canadian waters, @NovaTheShark, is named in honor of all the amazing people here in Nova Scotia. We’re so glad we’ve had a chance to engage with this community. pic.twitter.com/BplbmPYTKB