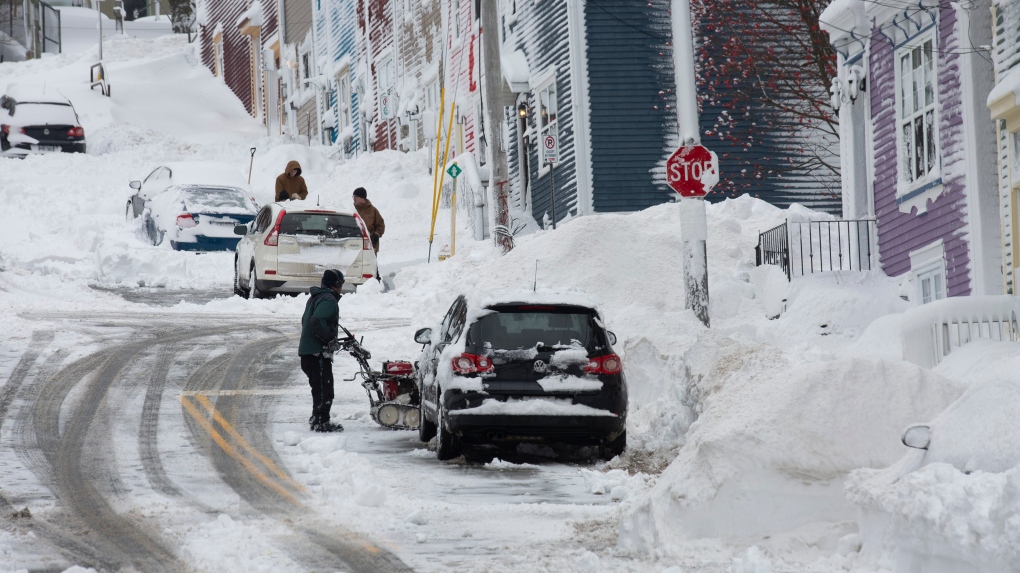 A man clears his driveway on Victoria Street in St. John's on Monday, January 6, 2020, following the first major snowstorm of the year. (THE CANADIAN PRESS/Paul Daly)

ST. JOHN'S, N.L. -- Residents of snowy St. John's, N.L., are calling attention to dangerous road conditions and impassable sidewalks after a number of pedestrians were struck by cars.

Snow clearing in the historic city's narrow streets often involves plowing space for cars and pushing snow piles onto the sidewalk, forcing pedestrians to walk on the roads.

Since the city has been blanketed by several recent snowstorms, the Royal Newfoundland Constabulary says it's aware of seven collisions involving pedestrians since Jan. 1, including one hit-and-run.

In one incident, a 63-year-old man died days after he was struck by a car while crossing a busy road near Memorial University of Newfoundland on Jan. 4.

Elizabeth Yeoman, a resident of 30 years who has advocated for better sidewalk-clearing services in meetings with city officials, blogging and a documentary film, compared it to "living in a war zone."

Yeoman is part of a group of concerned residents preparing to meet with city councillors next week, bringing testimonials from residents affected by the issue and calls to prioritize sidewalk clearing at the same time as road clearing.

She said some parents walking their kids to school have to use their own bodies to shield the children from oncoming cars, and sometimes even resort to keeping them at home to avoid a dangerous walk.

Police say it's too early to pinpoint exact causes in most of the crashes, but winter conditions have made navigating the city's roads more challenging for everyone.

"The conditions we're handed this time of year in the winter certainly provide a much more narrow roadway, and certainly create a more difficult environment for pedestrians to make their way and for operators' visibility," RNC Const. James Cadigan said.

"Due to the volume and frequency of snow, it is taking longer for the city to complete snow removals and sidewalks," a Wednesday statement from the city read.

The city clears sidewalks based on priority, with immediate school areas ranking highest, according to the city's website. It says 161 kilometres of sidewalk are designated to be cleared regularly during the winter.

For people who rely on public transit or walk to get around, the wait for sidewalks and bus stops to be cleared can be hazardous and costly.

Lue Bonia shared a video of a walk down a narrow St. John's street last week, showing less than a metre of space between passing cars and sidewalks covered in tall, ice-slicked snowbanks.

Bonia, who uses they/them pronouns, said winter months are unfairly challenging for residents who don't own cars and risk slips and falls during simple tasks like walking to work.

"When I walk outside, it's terrifying," they said.

Bonia has started resorting to taxis for a safer, quicker commute and said the extra cost has cut into their grocery budget and other expenses.

"Besides all the physical and mental risks because it's so scary, it's also a huge financial loss for a lot of us," Bonia said.

"I truly feel if more people who were in charge of a lot of these sorts if things actually had to use public access and public transportation, they would work a lot harder towards solving these issues."

A protest has been proposed for next Monday afternoon at City Hall, though it's not the first protest over sidewalks in recent years.

In 2014, a surge of protests on the issue resulted in a review of snow-clearing services in the city.

Yeoman said it's frustrating to raise the same concerns year after year without result, but she's keen to continue discussing the issue she sees affecting seniors, people with mobility issues and lower-income residents.

"I think the more pressure there is, the better," she said.

This report by The Canadian Press was first published Jan. 15, 2020.