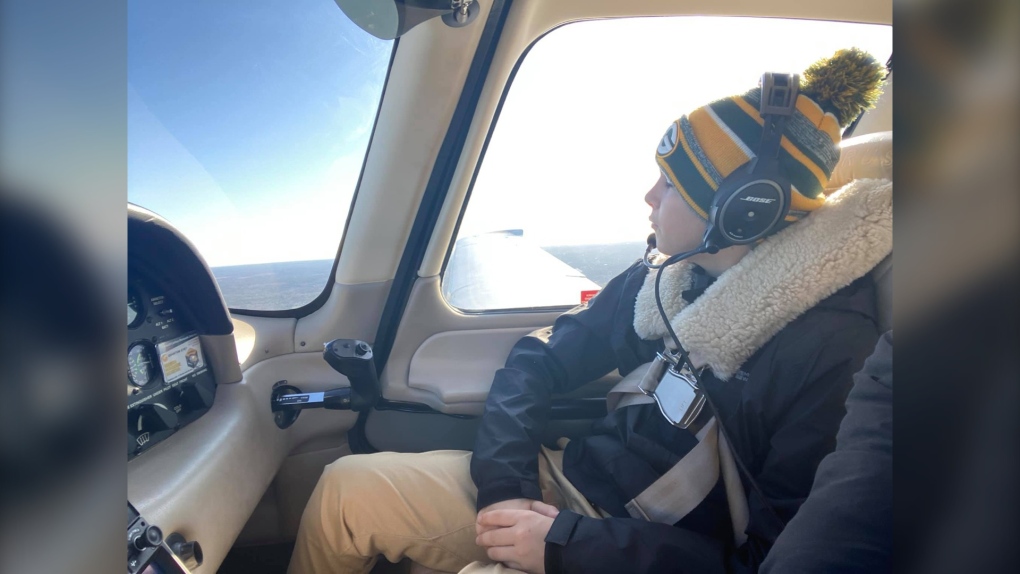 "He actually did really well," says Neonakis. "He did some turns, and he would look up at me; he would give me a thumbs up and say 'yeah, this is pretty cool.'" (Courtesy Facebook/Dimitri Neonakis)

HALIFAX -- Many Maritimers might know pilot Dimitri Neonakis for his inspiring flight path images, which have been a bright spot amid a pandemic and a generally difficult year. However, his good deeds don't stop at airborne designs as he lifts off to lift the spirits of young patients from the IWK Health Centre.

On Nov. 10, 15-year-old Anthony MacDonald suffered a severe skull fracture after being struck in the head with a hockey puck and was airlifted to Halifax to undergo surgery.

Following Anthony's amazing recovery process, his father, Mark MacDonald, discovered his son would be allowed to return home to Port Hawkesbury, N.S., on Thursday. Upon hearing the news, he connected with Neonakis – so Anthony could soar at 1,500 feet.

"I picked them up and drove to the airport – Anthony was very excited," says Neonakis. He even flew the airplane, and when we got to Port Hawkesbury, he asked to fly over his house and the hockey arena."

Meanwhile, Anthony's father buckled up for the ride.

"I was a little nervous because I've seen him drive four-wheelers," says MacDonald. "So my seat belt was on pretty tight."

However, all was well the teen piloted the aircraft.

"He actually did really well," says Neonakis. "He did some turns, and he would look up at me; he would give me a thumbs up and say 'yeah, this is pretty cool.'"

And the gift of community support was indeed appreciated.

"It's very emotional knowing that love and support was here waiting for him," says MacDonald. "It made focusing on him while we were there so much easier."

"It was pretty cool – once in a lifetime experience," says Anthony.

With his son finally home, MacDonald wants to share a message not only of thanks but of prevention.

"As they say in Nova Scotia, 'keep your blazes helmet on,'" says MacDonald. "Don't take your helmet off."

Meanwhile, Neonakis notes he's happy he could help make the day unforgettable. While Anthony's road to recovery will be lengthy, Neonakis adds blue skies are ahead – we just have to get there.

"We talk about how bad 2020 was, but there's so much goodness," says Neonakis. "It gives us hope to move forward, to be united."