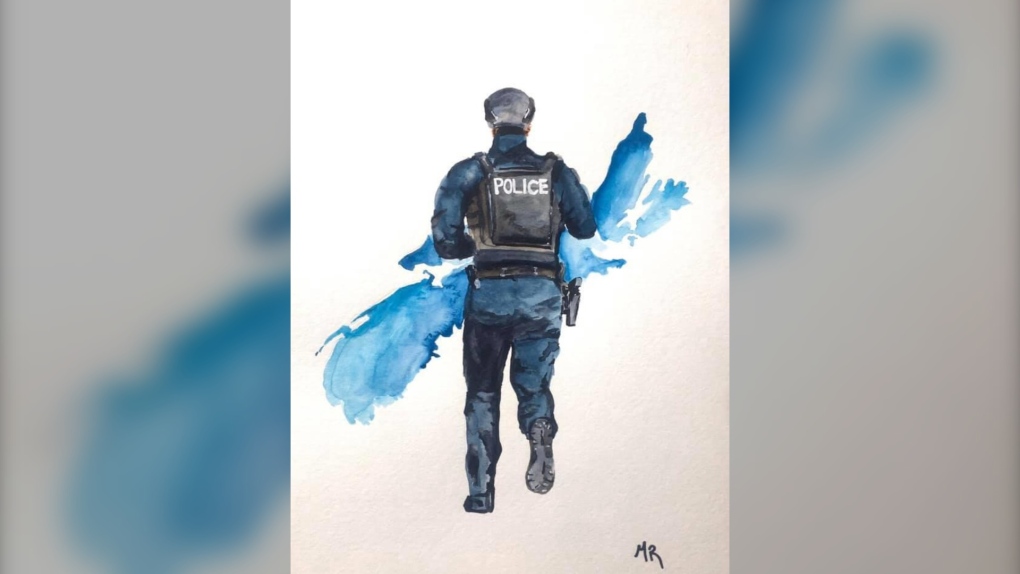 HALIFAX -- In times of chaos, when everyone is running from danger, first responders run towards it. That’s exactly what Const. Dave Smith, of the Halifax Regional Police, was doing in a photo captured on April 19 as a killer terrorized residents across several Nova Scotia communities.

When Const. Ahmed El Shair, also of the Halifax Regional Police, saw the photo of his friend running towards gunfire at a gas station in Enfield, N.S., he was inspired to reach out to Halifax artist Meg Ryan.

“Ahmed sent me a picture of his friend running towards danger and he asked me to paint it, he wanted to gift it to his friend,” says Ryan.

“I put Nova Scotia in the background because I thought it was fitting for what was happening,” says Ryan.

On Thursday, when she completed the painting of the police officer, Ryan sent a photo of the artwork to her friend Lauren Arbuckle.

“It was so beautiful and such a kind gesture,” says Arbuckle.

Arbuckle suggested Ryan begin selling the painting, with the proceeds going to the families of the shooting victims.

Ryan worked into the early hours of Friday morning creating paintings of various types of first responders, including firefighters, paramedics, RCMP, and police.

“The originals have all been gifted to people in that field,” says Ryan.

“I thought that it would be a great way to help.” 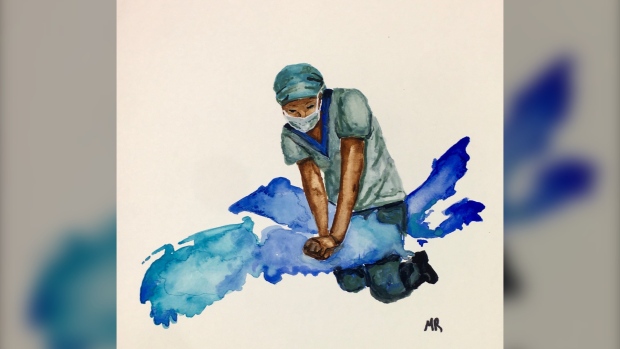 Ryan knew she would not be able to keep up with the demand for paintings, so instead decided to have prints made.

Arbuckle helped her find a printing company and created an online store and website to feature Ryan’s artwork, which officially launched Friday afternoon.

Ryan, Arbuckle, and El Shair shared the portraits on social media and the response was immediate.

“It’s just kind of taken off. It was a collaboration of all three of us. Meg is so talented, she just needed the encouragement to do it,” says Arbuckle. 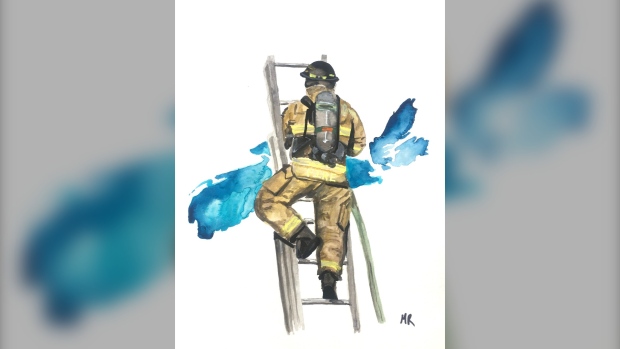 A firefighter is featured in a painting by Halifax artist Meg Ryan. (Courtesy: Meg Ryan)

The 9x6 prints are available on Ryan’s website and cost $50 plus tax. One hundred per cent of the proceeds will go to the families of the victims.

“It feels really good to be able to do something to come together with everyone in Nova Scotia; there are so many people doing so many amazing things right now,” says Ryan.

Arbuckle says she believes we are all affected in some way by the tragic events.

“I am just overwhelmed with joy and happiness that we can help in some small way,” says Arbuckle.

“I was picking up some of the originals and delivering them. I was overwhelmed with happiness for the first time this week, because it’s been such a heavy week. The only reason I was happy is we may be bringing some joy and happiness to the victims’ families in some way.” 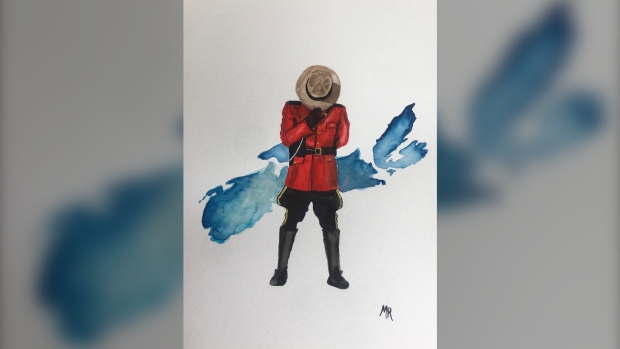 An RCMP officer is featured in a painting by Halifax artist Meg Ryan. (Courtesy: Meg Ryan)

So far, the paintings have raised over $16,000, averaging $5,000 a day for the first three days. Arbuckle says they would love to reach the $20,000 mark and are grateful for all the support they have received.

“I’m the one taking care of the orders and so I see where they are going and it’s literally Canada-wide, so it’s just incredible to have that support,” says Arbuckle.

“I am a true believer in giving back and paying it forward, I am so grateful that Meg has been able to use her talents to be able to give back and I am so appreciative to be part of it as well.”

Ryan is adding one more painting to the collection. It will feature corrections officers, in memory of Sean McLeod and Alana Jenkins who died in the shootings.

The geography of grief: Portapique saddled with the stigma of mass killing

Petition calls for N.S. high school to be named after Mountie killed in rampage