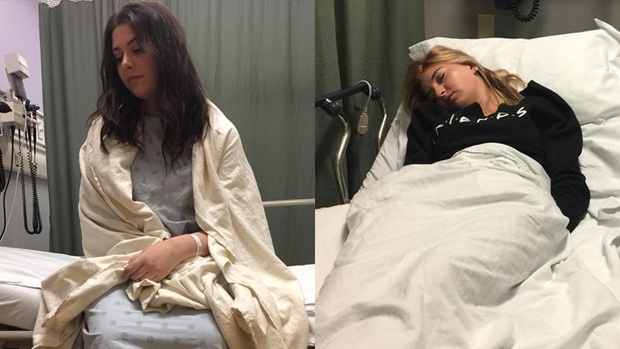 Brittany Bernard (left) and Paige Fitzpatrick (right) were admitted to a Halifax hospital after they say they were drugged with an unidentified substance. (Brittany Bernard/Facebook)

HALIFAX -- Brittany Bernard and Paige Fitzpatrick arrived around midnight Saturday at the Toothy Moose, a downtown Halifax cabaret packed with college and university students revelling in the end of exams.

"At that point we were pretty sober," says Fitzpatrick, a 21-year-old student at the Nova Scotia Community College. "I met a gentleman and he offered to buy me a drink."

That's when the evening took a perilous turn, ending hours later with both women admitted to a local hospital after they say they were drugged with an unidentified substance.

The women -- close friends since they were toddlers growing up in a Halifax-area suburb -- say it could have been much worse.

They reported the alleged crime to police and are sharing their story on social media to raise awareness about predators lurking at local clubs and bars, and the risks of accepting drinks from strangers.

"I could have been raped or taken because I had no idea where I was or my surroundings," Fitzpatrick says. "It's scary how quickly it hit both of us and how long the effects lasted."

"You can never be too careful," Bernard, 20, adds. "I thought I was being cautious but it only takes a second for someone to slip something into your drink."

The unknown man at the Argyle Street bar bought Fitzpatrick a tequila shot and a double vodka lime. He then knocked Bernard's vodka cranberry out of her hand and offered to buy her a new one.

She declined, but ending up finishing Fitzpatrick's drink before they went to the dance floor.

"It hit us instantly," Fitzpatrick says. "We both lost control of our bodies and sort of face planted on the floor."

The hours that followed were a blur. They somehow stumbled to the washroom, where they describe being violently ill and at points losing consciousness.

"I told a girl I thought we had been drugged, and I think she helped us tell the bouncer," Bernard says. "And at some point, I called my mom."

The bouncer waited with them until Bernard's mother arrived, who immediately took them to hospital.

"My mom went in and got two wheelchairs and then wheeled Paige in first," she says. "She was worse off and was admitted before me."

The hospital ran tests on both women, including electrocardiograms, and tested Fitzpatrick's blood.

"I don't remember anything at the hospital," Fitzpatrick says. "I just remember waking up in the hospital bed, with Brittany and her mom leaning over me."

Fitzpatrick says the doctors informed them they had been drugged, but that they couldn't determine the substance.

So-called date rape drugs, sometimes called roofies, include rohypnol, ketamine and gamma hydroxybutyric acid (GHB). They are rapidly absorbed and metabolized by the body, making it difficult to test for.

A spokeswoman for Halifax police confirmed that they received a report that two women believed their drinks had been tampered with while at the Toothy Moose in the early hours of Sunday morning.

"The investigating officer has sought out the video surveillance at the Toothy Moose and they'll review that in hopes of capturing the event or the person who is possibly responsible for doing this," Const. Carol McIsaac said.

She said this is not a common occurrence in Halifax, but that it's disconcerting whenever police receive a similar report.

McIsaac said she couldn't speculate as to what kind of drug it possibly is, and said they are often difficult to identify.

"The side effect of most of those drugs is it lowers your inhibitions, it impacts your cognitive decision-making and it makes you sleepy," she said. "We've had investigations in the past where what ends up happening is that the woman leaves with the person responsible for tampering with the drinks and then they're reporting a sexual assault."

Bernard shared the harrowing story on Facebook, which has since been shared more than 5,000 times.

Multiple people, both men and women, have commented on the story by sharing similar experiences at bars and clubs in Halifax.