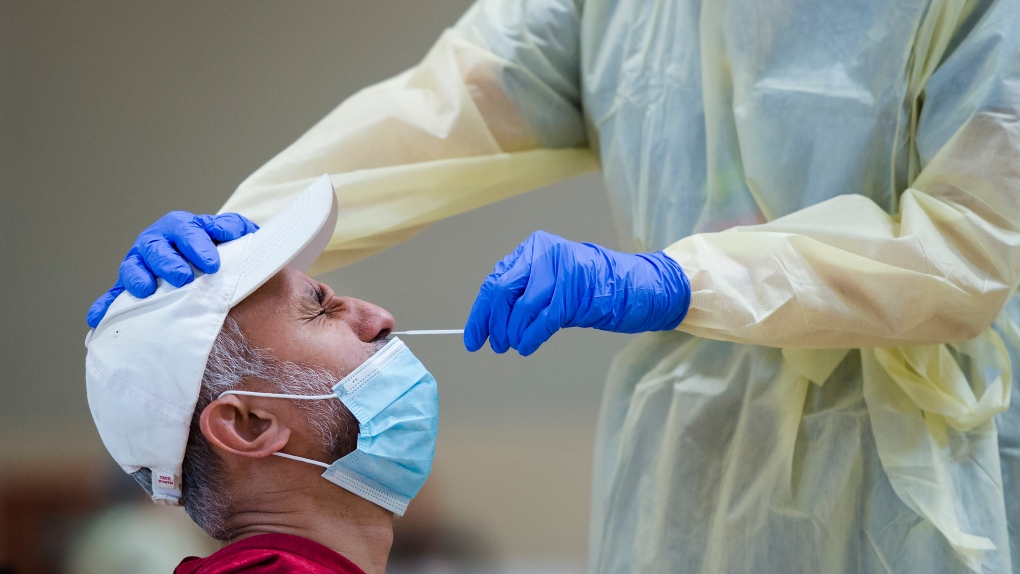 A man gets tested for COVID-19 from a health care worker at a pop-up testing centre at the Islamic Institute of Toronto during the COVID-19 pandemic in Scarborough, Ont., on Friday, May 29, 2020. (THE CANADIAN PRESS/Nathan Denette)

Nova Scotia public health said two of the province's new cases are travel-related, while the other four are connected to previously known infections.

"The case count is a little higher today but it's good to see that none of the new cases are from unknown sources," said Nova Scotia Premier Iain Rankin in a news release Saturday. "These numbers reinforce the importance of being tested and continuing adherence to public health guidelines."

There are 29 active reported infections of COVID-19 in Nova Scotia, officials said.

The province is still reeling from an outbreak that spread through the St. John's region in mid-February. Officials say it was caused by the more easily transmissible B.1.1.7 variant, which was first detected in the United Kingdom.

There are 87 active cases in Newfoundland and Labrador, with three of those patients in hospital, including two in intensive care.

In New Brunswick, public health authorities said they're still investigating the source of at least one of the six infections announced Saturday. They also warned of a possible exposure at the Gretna Green Elementary School in Miramichi and said anyone found to be a close contact of any confirmed cases will be notified by public health.

There are 35 reported active infections of COVID-19 across New Brunswick, officials said.

Prince Edward Island, which recently implemented a three-day lockdown in a bid to curb a rash of COVID-19 infections that emerged last weekend, did not release new case figures on Saturday.

Officials in the three other provinces are encouraging residents to follow public health advice and avail themselves of asymptomatic testing opportunities now offered in their respective areas.

This report by The Canadian Press was first published March 6, 2021.