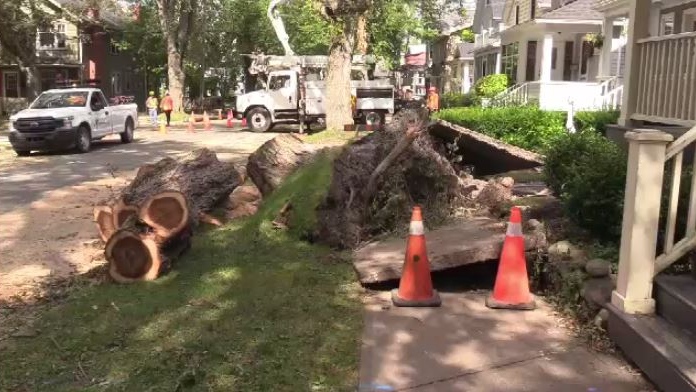 There were piles of branches and debris everywhere as the city brought in specialized crews to handle the high-risk cleanup.

Thousands of trees are down across the Maritimes and that includes hundreds of trees on Halifax streets that were hard hit 16 years ago during Hurricane Juan.

Beech Street is one of them and, while residents there have seen it all before, they are anxious to see the end of it now.

The street was in lock-down mode on Tuesday and closed to traffic and parking.

There were piles of branches and debris everywhere as the city brought in specialized crews to handle the high-risk cleanup.

Resident Jerry Barkow says it's as bad as he's ever seen it – and he was still without power on Tuesday.

"I did call them and I was told I should've been prepared and bought a generator," Barkow said.

When he told Nova Scotia Power that he didn't own a generator he says he was then told he might want to consider storing his frozen food at a friend's house.

The topper? A huge branch fell on his car.

"Actually there are more tree limbs down than I remember with Juan," Ashley-Leblanc said.

Throughout the city, the impact of Dorian is evident.

Michael and Cindy Extine are visiting from Washington state and had a trip to the Public Gardens on their bucket list, but when they got there, it was closed.

Point Pleasant Park also remains closed and there are signs of impact from the storm.

Later this week, the city will inspect this park and the public gardens to assess the damage.