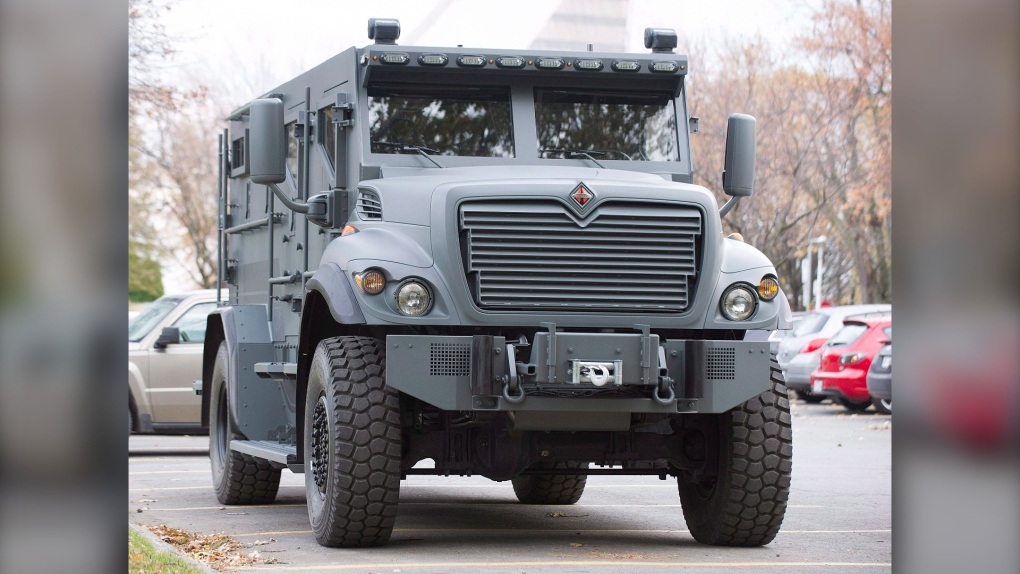 HALIFAX -- As a statement of police power, the armoured rescue vehicle that Halifax Regional Police had planned to buy for more than $300,000 spoke volumes about the militarization of law enforcement agencies in Canada.

The 8,000-kilogram, armour-plated truck -- equipped with a rotating roof hatch, eight gun ports and a powered battering ram -- looked like it was ready for the worst of war zones.

However, when the purchase was scuttled by city council last month, Mayor Mike Savage made it clear the brawny vehicle had become a symbol of oppression, particularly for Halifax's Black community. The mayor said the money would be used instead for anti-Black racism programs.

"There has been in this province a history of systemic racism, and we have to do better," Savage said at the time.

The decision was seen as a step forward by those who have long complained that Canada's police forces are becoming paramilitary organizations that act more like occupying armies than community-based partners.

"This announcement sends a positive message," said Akwasi Owusu-Bempah, a sociology professor at the University of Toronto. "I have no doubt that what we call defunding of police ... will take hold in Canada."

Owusu-Bempah, whose work examines race, crime and policing, cited the July 6 decision by Edmonton city council to cut $11 million over two years from the Edmonton Police Service budget. That money will be spent on housing, social services and a safety task force.

The professor, who also works with the Centre for Addiction and Mental Health, said there is a growing movement to "de-task" the police, which means reducing the scope of their responsibilities and reallocating the savings.

He said mental-health organizations should be given the resources to deal with people facing mental-health crises rather than poorly trained front-line officers.

In the same vein, police should not be expanding their duties to include what the military is trained to do, because it transforms peace officers into soldiers who see members of the public as enemy combatants, he said.

"Poor, Black and Indigenous people then become the enemies in the war on drugs. It further entrenches the problems of racial injustice," Owusu-Bempah said. "(Police) feel like they're in battle, as opposed to serving a community."

The Canadian Association of Chiefs of Police did not respond to a request for an interview.

Meanwhile, there are others who say the about-face in Halifax was just a distraction from a much larger problem.

Kevin Walby, an associate professor of criminal justice at the University of Winnipeg, said there's more to militarization than the purchase of armoured vehicles, automatic weapons and tactical gear.

"In terms of defunding, they're actually the smallest piece of the puzzle," he said. "So I wouldn't say the decision (in Halifax) means that Halifax police are off the hook when it comes to militarization, because it could still be happening in other ways."

As an example, Walby points to the increasing use of heavily armed emergency response team members in routine, everyday policing.

"It is happening all the time, but we don't see it," he said. "And they even assign SWAT team members to do mental-health checks."

As well, Walby said he has been tracking a more insidious form of militarization known as "community policing."

It involves teams of officers fanning out in neighbourhoods to ask residents questions about their safety concerns and problems with their neighbours. The information is later used to compile detailed community profiles.

Though it may sound like a tame, feel-good strategy, Walby said community policing is anything but.

"Community policing has morphed into this kind of intelligence-gathering activity," he said. "The militaries in Afghanistan and Iraq used community policing models to ... collect intelligence and feed it back into military operations. Canadian police are now using the very same tactic."

In the United States, where the militarization of police has been more overt, an academic paper in the journal Research and Politics found that the increasing use of military equipment has led to more violent police behaviour.

The article, published in June 2017, cites a U.S. Department of Defence program that has made excess military weapons and vehicles available to local law enforcement agencies since the late 1990s.

The study revealed a statistically significant relationship between military transfers to police in four states and fatalities from officer-involved shootings.

"As militarization seeps into their cultures, (law enforcement agencies) rely more on violence to solve problems," the paper says. "The mechanism mirrors psychology's classic 'Law of the Instrument,' whereby access to a certain tool increases the probability that the tool is used for problems when other tools may be more appropriate."

"In the United States, we saw police with armoured vehicles pulling down the front walls of houses with a battering ram to execute warrants," he said. "When you have the militarized type of policing, it creates an environment in which the warrior cop is allowed to exist."

Obama's order came a few months after the shooting by police of Michael Brown, an unarmed Black youth in Ferguson, Mo., whose death sparked protests across the country -- not unlike the protests that followed the death of George Floyd, the Black man in Minneapolis who died May 25 as a police officer was kneeling on his neck.

The disturbing video showing Floyd's violent arrest gave rise to a global movement that, among other things, is calling for the defunding and demilitarization of police departments -- and an end to police brutality and systemic racism.

Plenty of cities across Canada already have armoured vehicles like the one Halifax rejected, including Ottawa, Fredericton, Saskatoon, Winnipeg and Sault Ste. Marie, Ont.

The Department of National Defence confirmed in 2014 it had donated five armoured vehicles to police agencies since 2007: a Grizzly armoured personnel carrier to Edmonton police in 2007; two Cougar armoured vehicles to the B.C. RCMP in 2010; and one Cougar each to the police in New Glasgow, N.S., and Windsor, Ont., in 2013.

The Cougar sent to New Glasgow was given away in 2017 because it was never put to good use, the police chief said at the time.

Still, the police departments that have these vehicles argue they are necessary because they offer protection to officers and the public during mass public shootings, hostage takings and other high-risk scenarios.

"Our police forces look more like military organizations -- with automatic rifles and riot shields and tanks," said Spratt who specializes in criminal law and policing. "There's no need for any police force to have a tank."

The Ottawa Police Service, for example, has an imposing armoured vehicle known as a Lenco Bearcat, which Spratt says has rarely seen service since it was purchased in 2010.

"When we're talking about defunding the police ... this is really low-hanging fruit," said Spratt. "Even if there is some marginal benefit in some rare circumstances, the cost of having these vehicles -- and inherent harm of having a militarized police force -- vastly outweighs any potential benefit."