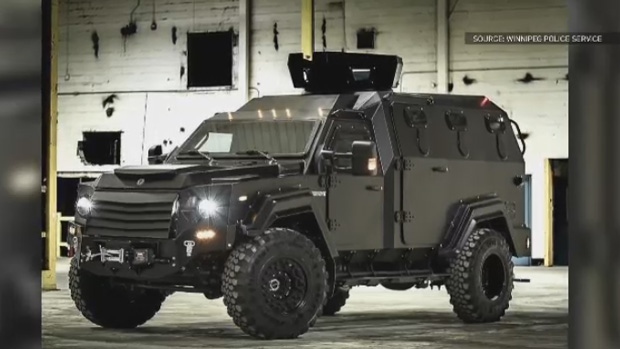 "(The vehicle) obviously had become a symbol in the community that really made us have a second look at it and say, 'Is this something important to us right now?"' Mayor Mike Savage said.

HALIFAX -- Halifax moved to the forefront of the national debate over "defunding" police forces this week when council decided to scuttle the purchase of an armoured rescue vehicle -- a move the mayor says was in response to protests around the world condemning racism and police brutality.

"(The vehicle) obviously had become a symbol in the community that really made us have a second look at it and say, 'Is this something important to us right now?"' Mayor Mike Savage said in an interview Wednesday.

"We know that we can put some resources toward anti-Black racism programs .... A lot of us thought this was the right thing to do at this point in time, and partly to send a signal to people that we're listening to the concerns that people have, and we're determined to act."

"Over the last few weeks, we have seen our community take a strong stand against anti-Black racism," Kinsella said in a statement that cited the "deplorable circumstances" surrounding the death of George Floyd, the Black man in Minneapolis who died May 25 as a police officer was kneeling on his neck, making it difficult for him to breathe.

The disturbing video showing Floyd's violent arrest gave rise to a global protest movement that, among other things, is calling for the "defunding" of police departments -- a somewhat vague term that has come to mean everything from redistributing portions of police budgets to dismantling entire police departments.

Regardless of how the term is interpreted, Kinsella said he and his officers want to take part in the evolving discussion over "new approaches" to promote public safety, which will include a focus on police resources.

Kinsella's statement did not address the decision on the armoured vehicle, and he declined a request for an interview.

As for the mayor, he said council decided to take $300,000 from the aborted purchase and spend it instead on anti-Black racism initiatives.

"Everybody is trying to figure out the best way forward," Savage said. "There has been in this province a history of systemic racism, and we have to do better."

'Happy to hear that our councillors are listening and understanding'

Pastor Rhonda Britton, moderator of the African United Baptist Association of Nova Scotia, said she was pleased with council's decision.

"I'm happy to hear that our councillors are listening and understanding -- and actually trying to see beyond today," said Britton, whose group has provided a voice for the African Nova Scotian community for more than 150 years.

"We see what is happening in the streets and the way that police have been militarized in other parts of the world .... That kind of (vehicle) is intimidating .... This is not a good time to make this purchase."

In May 2019, Halifax regional council voted in favour of spending up to $500,000 on an armoured vehicle, prompting criticism the city was militarizing the police.

Halifax Regional Police, then under the direction of a different chief, chose to buy an 8,000-pound machine built by Terradyne Armoured Vehicles in Newmarket, Ont., which came equipped with a rotating roof hatch, eight gun ports and a powered battering ram.

Halifax Coun. Shawn Cleary was opposed to the purchase from the beginning.

At the time, he said the brawny vehicle would send the wrong message for a police force trying to repair its image in the wake of a report that concluded Black people in Halifax were street-checked at a rate six times higher than white people.

Police said the vehicle would provide a "safe haven" during high-risk operations and natural disasters. The weaponless truck would be used to "safely remove people from dangerous situations," including active shooters and other threats, police said.

Cleary tabled the motion to kill the purchase on Tuesday.

"As a former army (reserve) officer, the last thing I want to see is the further militarization of our police force," he said in an interview Wednesday.

"Given the Black Lives Matter movement and the protests around the world -- and the growing number of people in Halifax who are concerned about police violence -- that really influenced the vote."

Only one councillor voted against the motion.

"In a very real way, it was a defunding moment, because it took money that was going into a militarized police vehicle and we put it into helping improve relations in our community," Cleary said.