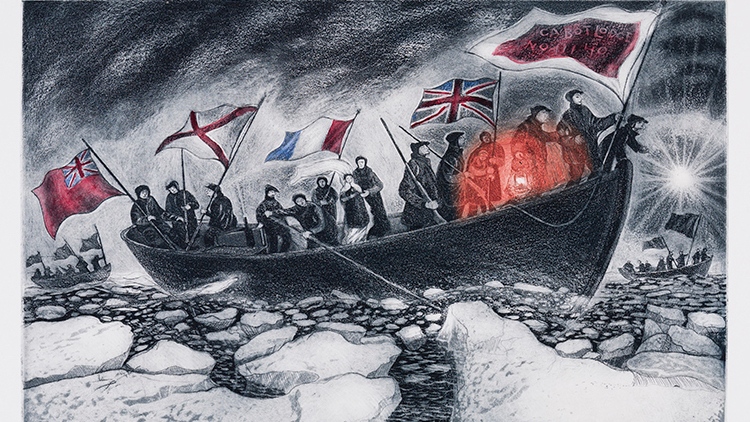 Canadian artist David Blackwood died Saturday at the age of 80. He was known for his vivid etching depicting traditional life in outport Newfoundland, as shown by this work titled "Wedding On Deer Island", in this undated handout image provided July 4, 2022. (THE CANADIAN PRESS/HO-Emma Butler Gallery)

ST. JOHN'S, N.L. -- Canadian artist David Blackwood, known for his haunting and powerful etchings of life in outport Newfoundland, died Saturday in Port Hope, Ont., at the age of 80.

His death is an incalculable loss, both to the province of Newfoundland and Labrador and to the Canadian art world, Mireille Eagan, curator at the Rooms provincial art gallery in St. John's, said Monday.

"David Blackwood is one of Canada's most beloved artists, but for the province of Newfoundland and Labrador, he is one of its greatest storytellers," Eagan said in an interview. "A good story told is one that's universal. And that's what he did."

Blackwood was born in 1941 in the Newfoundland town of Wesleyville, on the coast of Bonavista Bay. Though he stayed in Ontario after graduating from the Ontario College of Art in 1963, much of his art documented the tough, seafaring life he remembered from his hometown.

He maintained a studio in Wesleyville up until a few years before his death, Emma Butler, who represented him for about 35 years through her gallery in St. John's, said in an interview Monday.

Blackwood was awarded the Order of Canada in 1993 and the Order of Ontario in 2003. He was also awarded honorary degrees from the University of Calgary and Memorial University of Newfoundland and Labrador, both in 1992. He stands among great Newfoundland and Labrador artists like Gerald Squires Mary Pratt, and Christopher Pratt, who died on June 5.

Blackwood was a master of intaglio printmaking -- a technique in which images are etched into copper or zinc plates. Ink is then poured onto the plate to fill the recesses, after which paper is pressed onto the metal to pick up the ink and the image.

Some of Blackwood's most well-known prints depict men using ropes to haul houses across the land and sea, thus documenting the government-led resettlement programs that sprang up in the province in the 1950s. Others show dark-clad fishermen packed into wooden boats, heading to and from land.

In one image, called "Fire Down on the Labrador," a small boat drifts away from a burning two-masted ship, the red-ink flames pulled sideways by the wind into the frigid black sky. Beneath the scene lurks a massive whale, its body twisting by the long, underwater root of a looming iceberg. The baleen fibres of the whale's mouth seem almost sinister, like thousands of needle-thin teeth exposed by the animal's wide grin.

In another print, "The Great Peace of Brian and Martin Winsor," two hunters are shown tumbling in the depths of the sea, caught in the wake of another great whale and tucked into the curve of its tail. Their arms are folded across their bellies as their guns drift weightless beside them.

"I think that some of David's work is about survival," Butler said. "It's all about triumph -- that's the word he used -- over hardship. Because Newfoundland is still here."

There is a darkness in much of Blackwood's work -- the Globe and Mail called him "Newfoundland's gothic master" -- but there is also a sense of awe: the lurking whales, the towering icebergs, the radiant light guiding people as they fish, build and gather.

"His work is haunting," Eagan said. "He didn't shy away from difficult subject matter, but he also found beauty in those same stories -- the stories of loss, and the cod moratorium, and resettlement."

All the characters in his pieces -- "Captain Solomon White," "Skipper Bax Ford home in Wesleyvile," "Ephraim Kelloway's Door" -- were real people from Blackwood's family or childhood in Wesleyville, Butler said. He showed them in real situations, as he remembered them.

"A great deal of our history is in our body of work," she said.

This report by The Canadian Press was first published July 4, 2022.