Canadians helping Syrian families recall their own refugee past 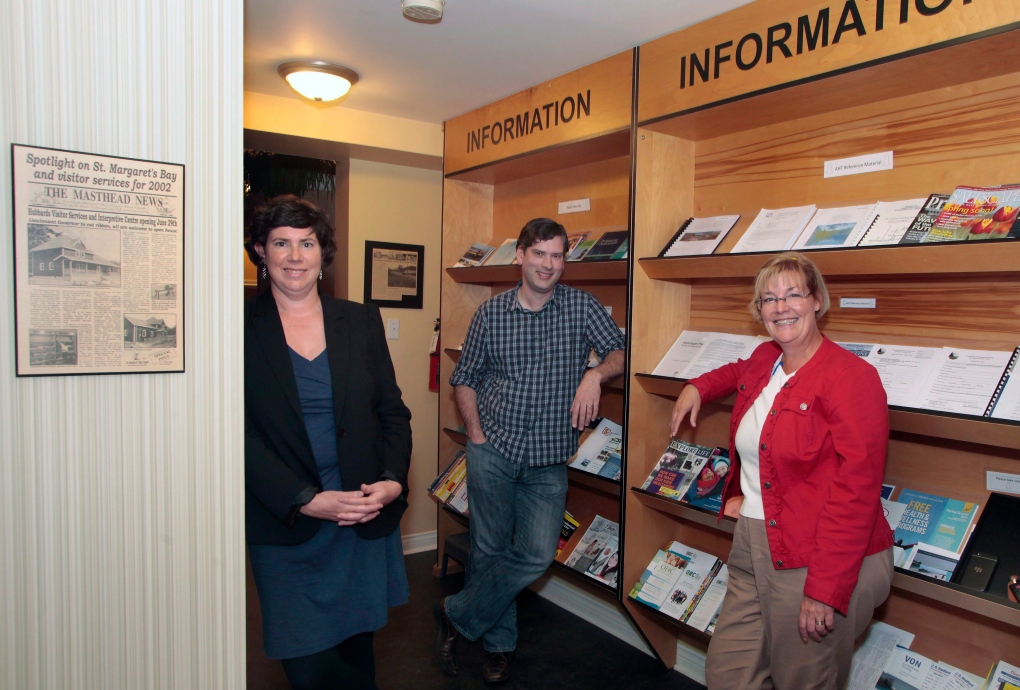 Members of the the Bay Refugee Project Susy MacGillivray, left, Steve Sharam, center, and Sheelagh Priestley pose for a portrait prior to the group's meeting in Hubbards, N.S. on Wednesday, Sept.30, 2015. (Darren Pittman / THE CANADIAN PRESS)

HALIFAX -- Writing a cheque for a Syrian refugee family gave Gabrielle Horne a powerful sense of connection to her own grandparents.

The Halifax cardiologist is among the thousands of Canadian donors who reached into their bank accounts this fall to ensure privately sponsored refugees can make the voyage from crowded camps in the Middle East to resettle here in the New Year.

As she read media reports and watched footage of the Syrians attempting to cross into Europe, Horne says she found herself thinking of her maternal grandparents Aaron Belenkie and Rose Friberg.

"My grandparents came to Canada in the 1920s by what was then the Soviet Union and so I know firsthand the importance of providing a safe haven for people in desperate circumstances," she said.

The couple met in Montreal and married, launched a business and raised a family. But the anguish of separation from their families and their struggle to come here after persecution for their Jewish faith was seldom spoken of.

It was too painful, says Horne.

When she heard of a refugee support group in Hubbards, N.S., the physician contacted organizers to promise a $2,000 cheque.

"I appreciated the opportunity to reflect on the meaning of welcoming refugees to Canada. So that cheque didn't hurt. I felt it was a personal opportunity."

The federal government requires the groups provide $30,000 for a small family, and many of the privately formed groups have been going beyond that in recognition that that figure may not be enough to provide for four or five people during a 12-month period.

The group in Hubbards began in a church hall in the small community on the province's south shore with the goal of sponsoring one family, and has been fundraising with community meals and art shows.

Susy MacGillivray of the Bay Refugee Project said in an email that donations of $1000, $2000 and $5000 have flowed in, helping lift the group beyond its original expectations.

"However, many other groups are not quite there yet with their fundraising."

The motives for those writing cheques are diverse, but often converge on a view that the Syrian struggles mirror those of past generations of refugees.

Jack and Nancy Jefferson, retirees who live in Vancouver, made the first private donation to the Bay Refugee Project. The couple provided $800 after reading a newspaper story about the group as they travelled through the province visiting their daughter.

"The war has changed the Syrians' lives and changed the lives of their children. ... They are people who have no place to go and they're desperate," said Jack. "I wanted to do something to bring them out of this and give them something brighter."

By writing a cheque, "you don't feel completely helpless," he explained.

The federal government has said 10,000 of the 25,000 Syrians it will bring to Canada by the end of February will be privately sponsored.

The federal website that updates progress says that as of Christmas Eve there were almost 5,000 refugees who have either arrived in Canada or whose application has been finalized but have not yet travelled to Canada.

In a news conference on Wednesday, federal immigration minister John McCallum said corporations including CN, RBC, and Scotiabank had provided $8.5 million, and many other companies were contributing.

"We have an anonymous company who's just pledged $2 million, but doesn't want its name to be known," he said.

The minister also noted that Khalid Usman, a leading member of the Muslim community in the Toronto area, held a fundraiser and had raised $1 million, while mosques in the area raised a further $2 million.

"At the other end of the spectrum, we have little children across the country committing to produce 25,000 toques for the refugees, and this started in Quebec, but has spread across the country," said McCallum.