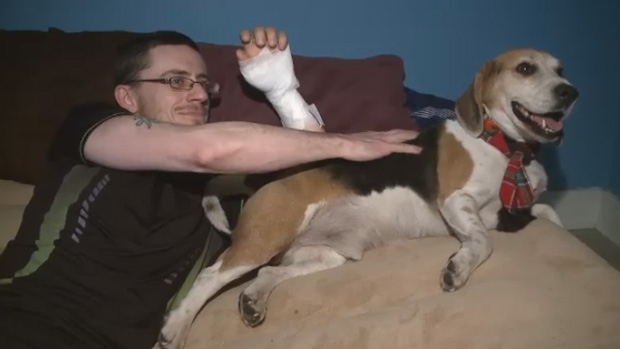 Charles Bailey is crediting his dog for saving his life after crashing his car into a ditch in New Waterford, N.S., last month.

A Cape Breton man who spent 10 hours trapped inside his damaged vehicle is crediting his dog for saving his life by keeping him warm.

Charles Bailey crashed his truck in New Waterford, N.S., while driving home last month after blacking out at the wheel. His vehicle rolled several times before coming to a stop deep in the woods. He was stuck there upside down until he was spotted.

Bailey says he woke up in a Halifax hospital.

“The whole situation is a lot to swallow, even still,” says Bailey. “A few days before the accident happened I was playing hockey and got a concussion. The first one I ever got.”

It's been discovered Bailey had a brain bleed. As a result, he remembers nothing of the crash.

“They had to cut this arm up because of all the pressure from the blood. I got third-degree frost bite in my right foot and a small fracture in one of my discs in my spine,” says Bailey.

Bailey’s truck took out a telephone pole and rolled out of sight of passing traffic. He feels the only reason he's alive today is because of his dog Dallas, who was in the truck with him.

“The dog is the hero,” says Bailey’s mother Annie. “He stayed with him the whole night. They said this arm was out in the cold in the snow, and the dog laid on his arm to keep it warm.”

It was also the dog that was spotted running lose on the roadside, which garnered attention. That eventually led to the discovery of the vehicle and Bailey.

“My dog is my best friend. He always was,” says Bailey.