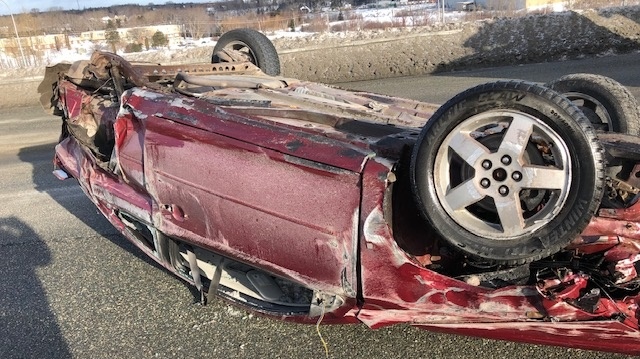 A Cape Breton teen has been ticketed for careless driving after flipping this car on its roof in Sydney River, N.S., on Feb. 20, 2020. (RCMP)

HALIFAX -- A 17-year-old boy has been ticketed for careless driving after he flipped his car on Nova Scotia’s Highway 125.

The RCMP and emergency crews responded to the collision in Sydney River, N.S., around 8:30 a.m. Thursday.

When officers arrived, they found a red Chevy Cobalt on its roof.

Police say the driver and passenger were both wearing seatbelts and had escaped without serious injury.

Police have received information that the driver may have been racing with another vehicle, which left the scene after the collision.

They believe a wheel came off the Cobalt during the collision, and that the tire and rim became separated. The rim then lodged under another vehicle, causing extensive damage to its undercarriage.

The driver of the Cobalt, who is from Albert Bridge, was issued a summary offence ticket for careless and imprudent driving.

Police say they are investigating the possibility that the teen may have been racing with another vehicle and they are asking anyone with information to come forward.

They also say additional charges may be laid.