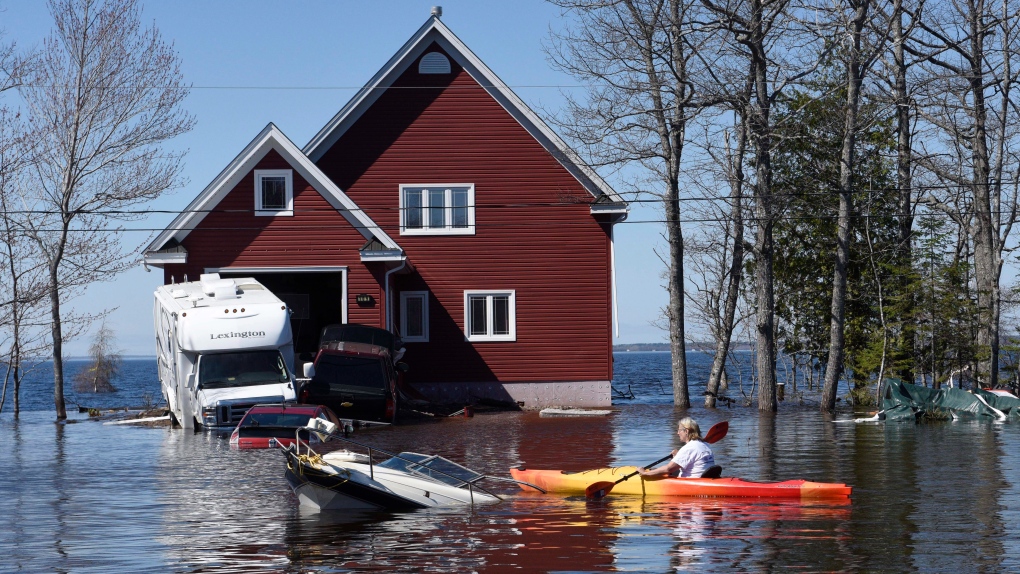 A person surveys damage to their house from a kayak in Grand Lake, N.B., on Thursday, May 10, 2018 in this handout photo. (THE CANADIAN PRESS/HO - Tony Crawford)

The Co-operators Group Ltd. has expanded its storm surge insurance coverage in Atlantic Canada after several high-profile weather events in the region.

The insurer is making the coverage available for the first time to homeowners in New Brunswick, Newfoundland and Labrador and Prince Edward Island.

"Overland flooding has been identified as the most pervasive and costliest cause of damage to Canadian homes, yet most are inadequately protected against this growing risk," said Co-operators CEO Rob Wesseling in a statement.

The Co-operator's coverage was recently released in Nova Scotia.

Atlantic Canada was hit by major flooding this past April and May that saw water levels reach and sometimes exceed levels last seen in the 2008 flood.

Many insurance companies started flood insurance programs after the Alberta flood of 2013 caused more than $4 billion in uninsured losses.

About three-quarters of Canada's major insurance companies now offer overland flood coverage, according to the Insurance Bureau of Canada.

The Co-operators first offered overland flood insurance in Alberta in 2015 and expanded the coverage to Ontario in 2016.