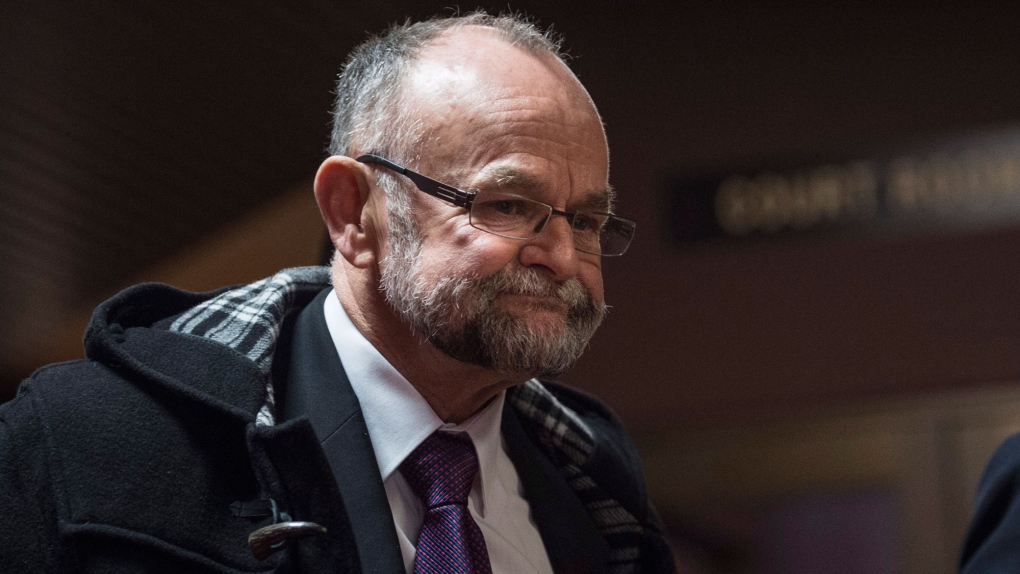 KENTVILLE, N.S. -- His face streaked with tears, the middle-aged man put his head in his hands and breathed heavily.

Testifying about an alleged sexual encounter with Brent Hawkes as a teen more than 40 years ago, his face was red with emotion. The man declined suggestions, however, that he should take a break from the witness stand.

"I think this is as good as it's going to get," the man quietly said of his emotional state Tuesday.

It was his first day of testimony at the well-known Toronto pastor's trial on charges of indecent assault and gross indecency. The man, the complainant in the case, will return to the stand Thursday after an off-day Wednesday.

Crown lawyer Bob Morrison said Tuesday was a distressing day for the complainant, who can't be identified under a publication ban, as he recalled memories that have haunted him for decades.

"It was very emotional. He described some of the details very vividly," Morrison said outside of the courtroom in Kentville, N.S. "Other details he was a little bit fuzzy on. But he was very clear on the things he did remember."

Hawkes, a prominent rights activist who was then a teacher in the Annapolis Valley, has pleaded not guilty.

The man, who was then about 16, testified that Hawkes encouraged him and other teenage males to strip at a drunken get-together at his trailer in the mid-1970s, and then took him to a bedroom for sex.

He said he had heard of students hanging out at Hawkes' place, and had been there once before himself to drink alcohol and play the video game Pong. The man said it was a single-unit trailer located behind a tavern in a trailer park in Greenwood, N.S., with a living room, small kitchen, bathroom and at least one bedroom.

All three witnesses that have testified thus far have said they were high school students when they attended a gathering at Hawkes' trailer.

But some details of the get-together have differed among the three men. And all three admitted their memories from that day are not complete.

Two witnesses, including the complainant, have testified that drinking games were being played and that at one point, clothes were being taken off as part of the game.

One witness testified that he saw Hawkes performing oral sex on the complainant on the floor of the living room. He said someone asked the teenager what was going on, and the student put his hands up in the air as if to say he didn't know.

But the complainant made no mention of that during his testimony Tuesday, only saying that Hawkes performed sex acts on him in a bedroom at the trailer.

The complainant did say that as part of the drinking games being played in the living room, Hawkes suggested at one point that if you lost the game, you would do something to the other players -- "Like touch them, rub them."

"(Hawkes) was watching us disrobe -- encouraging us," the complainant testified, adding that Hawkes had been sitting on the couch in his underwear. "It just seemed very, very strange."

High-profile defence lawyer Clayton Ruby has questioned the witnesses on the reliability of their memories, but all three men have contended that what they have told the court is true.

Ruby spent much of Tuesday questioning the complainant, noting there were discrepancies in some of the man's testimony compared to what he said in his statement to police, including the touching and rubbing as part of the drinking game.

"I'd say it's a patchwork of really clear memories that aren't enough to fill in the full picture," the complainant said when questioned by Ruby, likening it to a book with a ripped-out page. "The passage would be complete, but it's not the entire book."

Morrison said details are important in this case.

"These types of cases, there's a saying 'The devil is in the details,' so (Ruby) is just making sure any inconsistencies or anything along those lines, he questions them about," said Morrison.

The trial is also scheduled for Monday, Tuesday, Wednesday and Friday of next week in Kentville provincial court.

Hawkes has watched intently during the proceedings, sitting in the front row of the gallery diagonally from the witness stand, often jotting down notes in a black notebook open on his lap.

It's not known if Hawkes will take the stand.

Hawkes has maintained his innocence. He issued a statement earlier this year saying: "I want to be crystal clear: I am innocent of these allegations ... The purported events simply did not take place. I will fight, with all that I have, these accusations."

Originally from Bath, N.B., Hawkes has been the senior pastor at the Metropolitan Community Church of Toronto for 38 years. Considered one of the spiritual leaders of Toronto's gay community, he is also known as a vocal proponent of same-sex marriage, and in 2007 was appointed to the Order of Canada.