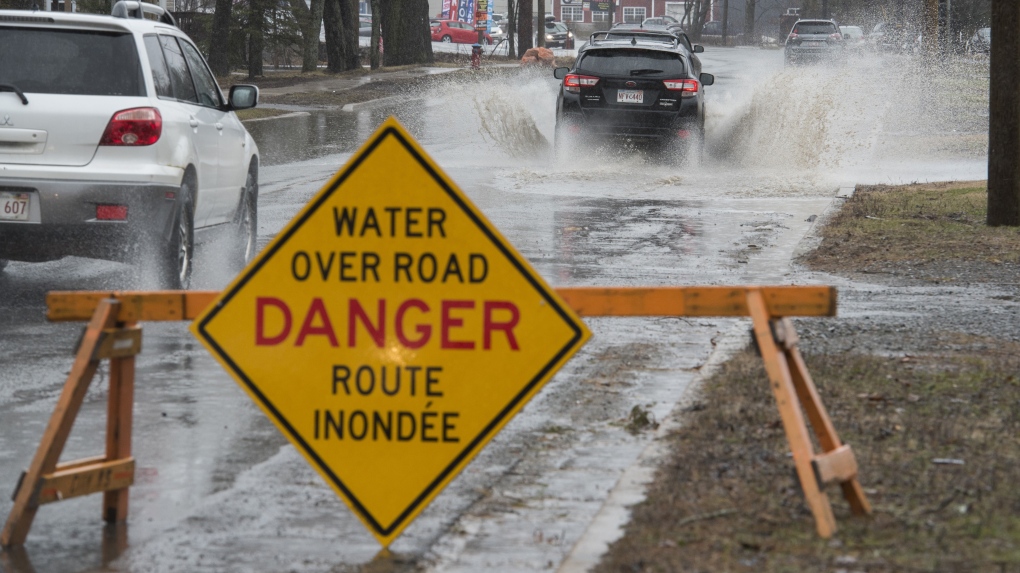 Streets and sidewalks are flooded from heavy rain and flood water from the St. John River on Riverside Drive in Fredericton, N.B. on Saturday, April 20, 2019. (THE CANADIAN PRESS/Stephen MacGillivray)

With key infrastructure in the Maritimes and Quebec again threatened by surging waterways, flooding experts say it's past time for fixes that consider worst-case climate change scenarios.

The New Brunswick government announced Wednesday night the closure of portions of the Trans-Canada Highway between Fredericton and Moncton -- for the second year in a row -- forcing detours for car traffic and thousands of trucks that use the trade corridor each day.

And on Thursday afternoon, Quebec officials issued an alert that a hydro dam on the Rouge River was at risk of failure, endangering about 250 people downstream. They ordered an immediate evacuation.

Surging rivers in the province have already been blamed for one death, damage to factories and homes and the closures of many secondary routes.

Slobodan Simonovic, director of engineering studies at the Institute for Catastrophic Loss Reduction, says engineers and the scientific community need to move more swiftly to design infrastructure that accounts for climate change science.

"Go with the conservative prediction of the future. Go with something that is predicting high potential impact," said the civil engineer, who teaches at Western University in Ontario.

Blair Feltmate, head of the Intact Centre on Climate Adaptation at the University of Waterloo, says efforts are underway at the National Research Council, the Standards Council of Canada, the Canadian Standards Association and his centre to develop fresh standards for infrastructure to adapt to climate change.

Solutions for roads already in place may include building protective berms, diversion channels to take storm waters from highways and holding ponds to keep water in safe locations, he said.

There may also be methods to place natural features near roads to absorb water before it spills onto the pavement, and management systems can be put into place to clear debris in culverts and prevent damming.

"We know what to do to take risk out of the system. The problem is complacency. We're simply not moving fast enough on these files," Feltmate said in an interview. "I think the light is starting to dawn. If we ignore it we do so at our own peril."

Prime Minister Justin Trudeau made similar points on Wednesday, while visiting an evacuation centre in the city of Gatineau, Que., near where the Ottawa River jumped its banks.

"It means we have to think about adaptation, mitigation and how we are going to move forward together," he said.

Quebec is struggling with infrastructure problems of its own, as residents of several small islands in the Montreal area have been cut off from the world after officials were forced to close the only bridges linking them to the mainland.

Officials in Laval scrambled to set up dumpsters and emergency services for the 1,000 residents of the Iles-Laval on Thursday after the rising waters forced officials to close a bridge to vehicle traffic.

Across the province more than 2,500 homes were flooded and 2,184 were isolated -- their road or bridge access cut off by water. Some 919 people had been forced to evacuate.

One death has been blamed on the high water thus far, after 72-year-old Louise Seguin Lortie died last Saturday after driving her car into a sinkhole caused by flooding in the Pontiac area, about 30 kilometres northwest of Ottawa.

Kevin Manaugh, a geography professor and member of McGill University's School of Urban Planning, said it's not easy to protect transportation infrastructure in Quebec, where frigid winters, high precipitation and the freeze/thaw cycle form a "unique set of circumstances that makes it harder to plan for things that will last for decades and centuries."

He said that in urban areas especially, planners can turn to technical solutions such as using more permeable paving materials, planting trees and creating large water retention basins to help soak up the water near developed areas.

"The more we build green space and rainwater retention, these are solutions that exist to make sure the land can take more heavy rainfall," he said.

Civil engineer Guy Felio, senior adviser of asset management solutions at Stantec, said the key going forward is to build resilience in the roadways -- allowing them to adapt if rainfall predictions increase even further.

He says designers are now starting to consider the various climate change projections in their work to make highways more resilient.

That doesn't necessarily mean building roads higher and with harder materials -- at much higher costs, he said.

Rather, it may involve purchasing land alongside the highways to allow for holding ponds and other features to be added.

Paul Bradley, a spokesman for New Brunswick's Department of Transportation, said the flooding of the Trans-Canada Highway is the third such event since 2008 that has caused widespread damage.

"It's obvious our circumstances are changing and we need to change as well," he wrote in an email.

"Discussions about how we can reduce the impact of flooding on provincial infrastructure have already taken place."

Al Giberson, the general manager of the MRDC Operations Corp., the operator of the highway, said in a telephone interview that the road's condition will be assessed after the flood recedes.

"In the future, the assessments will have to include what the potential is for events like this ... and solutions will have to be developed for that. How long that takes, I can't answer right now," he said.

-- With files from Morgan Lowrie