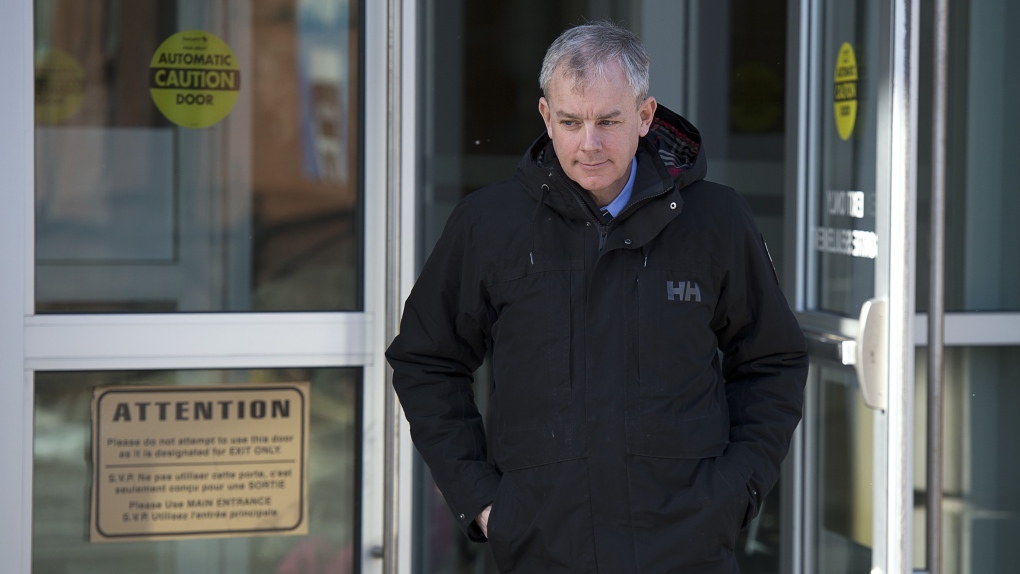 Dennis Oland heads from the Law Courts in Saint John, N.B., on Tuesday, Jan. 29, 2019 as his trial in the bludgeoning death of his millionaire father, Richard Oland, continues. (THE CANADIAN PRESS/Andrew Vaughan)

SAINT JOHN, N.B. -- Dennis Oland was deeply in debt on the day his multimillionaire father, Richard, was beaten to death, a Saint John court has been told.

Oland, 50, had maxed out most of his personal accounts despite having raised credit limits by thousands of dollars in the months prior to Richard Oland's July 6, 2011, killing.

John Travis, Dennis Oland's boss at CIBC Wood Gundy, and Eric Johnson, a forensic accountant, were on the stand at his second-degree murder trial Tuesday detailing Oland's cash "crunch" in the summer of 2011.

The prosecution, now in the fourth week of its case against Oland, is trying to establish a financial motive for the killing.

Prosecutors contend that Dennis Oland killed his dad "in a rage" and that his desperate financial situation was behind the violent attack that left 69-year-old Richard Oland lying dead in a pool of blood on his office floor.

The businessman and former executive at Moosehead Breweries Ltd., had 45 blunt and sharp force injuries, most of them to his head.

"It looks like I'm going to struggle with cash for the next few months and as a result I wanted to revisit your offer to assist me to get through this crunch period," Dennis Oland said in an email to Travis in June 2011, about a month before the killing.

Oland said he was struggling to meet his commitments, which included $4,300 per month for child/spousal support and the more than $1,650 he had to pay his father every month for a $500,000 loan a couple of years earlier.

Travis said CIBC agreed to extend him an extra $8,000 per month, or $16,000, for June and July. Oland figured things would pick up in his investment adviser job by August and September, so he only needed the cash for the short term.

However, a glitch on the part of the bank meant he did not get the full amount he needed in June.

In a note to Travis on June 15, 2011, asking for the mistake to be immediately fixed, Oland said he was "nervous" that he wouldn't be able to make his financial commitments.

"It is essential that the correct funds be placed into my bank account today so that I can honor my commitments that are due today," Oland wrote.

He didn't mention in his email that the $8,000 was the first instalment of the two-month loan he had obtained from his employer.

Lisa Oland said her credit card also was maxed out.

Johnson showed the trial a series of slides detailing Dennis Oland's accounts, including his chequing account, a line of credit and an investment account.

"The account was frequently overdrawn," Johnson told the court, referring to Oland's chequing account, with a $2,000 overdraft limit.

"It rarely had a positive balance that lasted more than a month."

The defence position is that since Dennis Oland was used to being in debt, and always seemed to be able to get credit increases or advances at work, the financial issue does not work as a motive.

"It's an occupation where there is not a steady, fixed salary, correct?" defence lawyer Alan Gold asked Travis, noting that the investment firm would help out its investment advisers, like Oland, when needed.

Defence lawyer Mike Lacy pointed out during his cross-examination of Johnson that he did not do a net worth analysis of Dennis Oland.

As well, Lacy said when the entire month of July was considered, including the 24 days after the murder, it was actually a better month than most for Oland and ended in the black in his chequing account.

The trial, which is expected to last until mid-March, is a retrial. Dennis Oland was convicted by a jury in 2015, but the verdict was set aside on appeal and the new trial ordered.