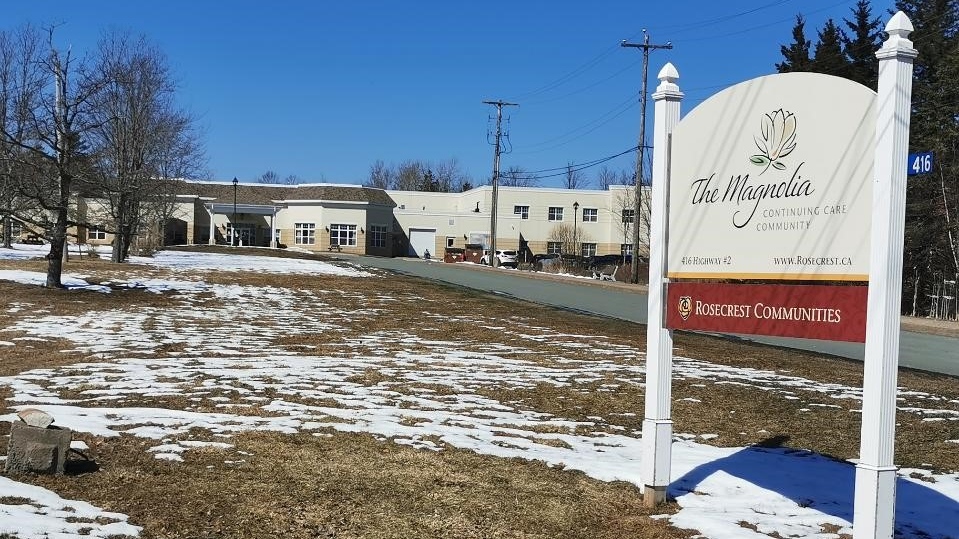 A confirmed case of COVID-19 involves a non-resident at the Magnolia residential care home in Enfield, N.S., the third positive case involving a long-term facility in the past two days.

The latest case is a worker at the Magnolia residential care home in Enfield, N.S.

It was one of 12 confirmed cases of COVID-19 announced Sunday for the province, bringing the total to 122.

Dr. Robert Strang, the province's chief medical officer of health, says, so far, tests of residents and other employees who may have been in contact with the workers have come up negative.

On Saturday, the province announced workers at the R.K. MacDonald Nursing Home in Antigonish, N.S., and an employee at Lewis Hall, a private retirement community in Halifax, had tested positive for the virus.

Strang says the workers who tested positive had stopped going into work and stayed home before they were showing symptoms.

However, Strang says health officials will continue to monitor for signs of the illness at the homes and continue testing.

Premier Stephen McNeil told reporters he's frustrated by reports of people going to parks and beaches even though they're closed, referring to citizens who do this as, "the reckless few."

He warned that if people don't obey the rules about avoiding public gatherings, "police will do it for you."

Strang says the nursing home infections are a reminder of what's at stake.

"The recent cases in the homes for seniors is a strong reminder that our older population is more vulnerable," he said. "They need our help and they deserve our vigilance."

In Newfoundland and Labrador, the province announced 15 new positive tests, bringing the total confirmed cases to 135, as the province continues to have the second highest per capita infection rate in Canada after Quebec.

The province attributes the rapid growth of its figures to the "clustering" of a large number of cases that occurred at two funerals held at Caul's Funeral Home in St. John's earlier this month.

Dr. Janice Fitzgerald, the chief medical officer of health, said as of late Saturday, 99 of the province's 135 infections were linked to the funerals, which she referred to as "the Caul's cluster."

"It's not a bad thing we found them .... It enables us to be able to isolate those people and prevent further spread," she said.

Premier Dwight Ball noted during his daily news conference that as of Sunday there are two people in intensive care units being treated for the illness.

John Haggie, the province's minister of health, said there are plans for a remote hospital for patients with non-COVID-19 illnesses in case there is a shortage of beds in hospitals.

He said a mini-clinic, part of Canada's National Emergency Strategic Stockpile, has been brought to St. John's. "It's available if we need to move a convalescent patient who doesn't have COVID into a temporary space for accommodation," he said.

He added that roughly 45 per cent of acute care beds are currently vacant and available to COVID-19 patients.

The health minister urged citizens to be more careful while they are at stores, keeping two metres of distance and only shopping when necessary.

He said that if a report that someone with COVID-19 was out shopping proves correct, charges could be brought under the regulations put into place by public health authorities.

This report by The Canadian Press was first published March 29, 2020.