COVID-19 in the courtroom: How the coronavirus affected Matthew Raymond’s murder trial

FREDERICTON -- It was the first jury selected during the COVID-19 pandemic in Canada.

It was during a fitness hearing in August when a jury of seven women and five men were chosen and it was later ruled 50-year-old Matthew Vincent Raymond was fit to stand trial.

That ruling came two years -- almost to the day -- of the events that took place on a sunny Friday morning in a Fredericton northside neighbourhood.

Four people -- a personal support worker, a musician and two police officers -- were killed on Aug. 10, 2018, when Raymond opened fire from the window of his apartment. That was an agreed statement of fact between all parties on the first day of the trial.

Those 12 people were asked to remain as the jury during the criminal trial. It took place two-and-a-half blocks from Fredericton’s usual courthouse, at the city’s convention centre, where a ballroom that usually hosts the State of the Province event was turned into a large, physically-distanced courtroom.

Only media and family members of the victims were allowed to watch the proceedings over the last 10 weeks. The risk of opening to the members of the public was too great, according to the regional director of court services.

“There’s a number of court participants that must appear in court,” said Ross Gorman in October. “To afford those that would be just nice to be in court, and possibly infect those who have to be there, would be in our respective opinion, counterproductive.” 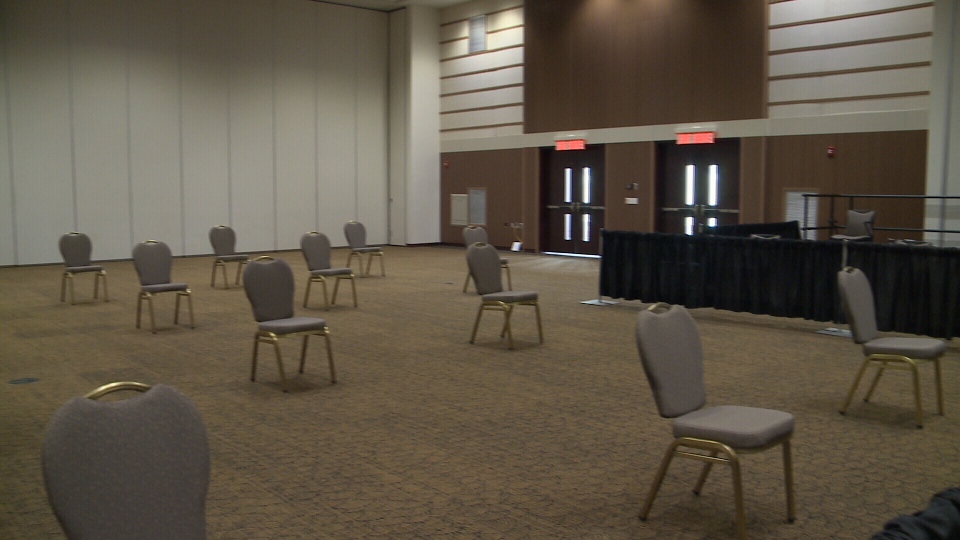 A physically-distanced makeshift 'gallery' is seen at the Fredericton Convention Centre, where Matthew Raymond's first-degree murder trial was held during the COVID-19 pandemic. (Laura Brown/CTV Atlantic)

Sitting in that ballroom, six feet from other media outlets and family members, became normal as the trial got underway. But there were moments when COVID-19 had its impact.

She wasn’t supposed to be the second person to take the stand, but Ceilidh Bowen -- a paramedic student at the time of the shooting who rode in the ambulance that took Raymond to hospital -- had to self-isolate for two weeks before entering the courtroom. Now working in Ontario, she was in New Brunswick the first week of September, and her flight back was booked for Sept. 23, at 1:20pm.

But there was a week-long delay in the trial, at which time the defence applied for a mistrial. That application was denied in the end, but it meant Bowen’s testimony had to be moved up.

Then, a juror had to be tested for COVID-19. Then, defence lawyer Nathan Gorham also had to be tested. And then, another lawyer. All three tests came back negative, but each time, it cost the court a short delay.

“Having just the regular run-of-the-mill cold would mean that it would put the entire trial on hold. There was a level of anxiety that existed because of that,” said Gorham.

He also said the novel coronavirus added a layer of bureaucracy when calling witnesses from outside the province.

Some of those witnesses couldn’t afford to spend two weeks self-isolating before their testimony. So, Worksafe NB and Public Health established guidelines for how they would get to the province, and how people would communicate and interact with them while they were there.

“Although it’s fairly simple and straight forward on paper, sometimes it got very difficult to maintain it when it was actually happening,” Gorham said.

Between each of the 44 witnesses, the stand had to be cleaned. One of the witnesses, who also came from Ontario, was seated in the gallery while they waited to testify. Instead of a six-foot radius, court staff built a 10-foot one around their chair.

“We’re figuring it out, as it plays out, on a day-by-day basis,” said Gorman.

When the number of cases started to rise in the province in October, Gorham and his co-counsel, Breana Vandebeek, said they lost access to visit their client in person.

But they say sheriffs, jail and court staff were “very understanding” and worked to ensure there wasn’t a long disruption.

“If there’s a better way to do it, then it escapes me,” Gorham said.

Fredericton’s Court of Queen’s Bench was moved to the Convention Centre in the spring.

When it was first moved, Justice Terrence Morrison, who presided over Dennis Oland’s retrial, said any jury trial could not go ahead in the original courthouse during the pandemic.

“Social distancing makes conducting a jury trial at the Justice building on Queen Street absolutely impossible,” he said. “Not only could you not social distance in the courtroom itself, but the jury room facilities … they’re inadequate even as they are now. It would be impossible. You couldn’t ask a jury to go in that room given COVID-19.”

According to the New Brunswick Department of Justice, the province has an agreement with the Fredericton Convention Centre to continue court services at the centre until Dec. 31. After that?

“We are in dialogue with the city on extending the lease. We have nothing further to announce at this time,” said a department spokesperson.

Crown prosecutors in the Raymond case, Darlene Blunston and Jill Knee, were approached for a comment on this story, but did not respond.