An out-of-control wildfire in Nova Scotia's Yarmouth County has tripled in size since the Department of Natural Resource's last update Wednesday morning.

"This afternoon, because the smoke had eased a little bit, the pilots had a good chance to fly it a little better, and right now it's sitting at 3,100 hectares," said Kara McCurdy, the wildfire prevention officer with the Department of Natural Resources and Renewables.

According to DNR, two helicopters, 40 personnel from across the province and a CL-415 water bomber from Newfoundland and Labrador are working to contain the fire.

Crews have been fighting the wildfire since Monday. The water bomber arrived Tuesday night from Newfoundland and Labrador.

DNR first tweeted about the fire at 10:20 p.m. Monday. At the time, it said crews were responding to a wildfire about two kilometres west of South Horseshoe Lake, and that it was estimated to be about 50 hectares.

It has continued to spread since then.

Two helicopters, one CL-415 water bomber and 40 @NS_DNRR personnel from across the province are responding to the wildfire near Horseshoe Lake, Yarmouth Co. Fire is considered out-of-control and estimated to cover 3,100 hectares.

McCurdy says winds and low humidity have made it difficult to control the spread and access the fire's remote location, which is mostly accessible by all-terrain vehicles or by walking.

"There's no way you can get a vehicle in there to fight the fire easily,” said McCurdy on Tuesday. “So, they're having to air-lift equipment in and personnel onto the fire.”

The cause of the fire remains under investigation, but McCurdy says they believe it started due to human action.

"Certainly, it is human-related," she said. "We are going to be investigating the fire as of tomorrow."

According to a news release from the province, the fire continues to approach Rushy Lake. However, due to how remote it is, it is not expected to reach homes or communities.

“The province's response is being managed by highly trained professionals and fire crew members who are ready to respond at a moment's notice to keep us safe in case of emergency,” said Natural Resources and Renewables Minister Tory Rushton in a news release. "As a former fire chief, I know they will protect our communities, homes, and forests."

The province says conditions across Nova Scotia are very dry and burning is not permitted in Shelburne, Yarmouth or Queens counties.

“April and May tend to be the busiest months of the fire season. Grass, brush and leaves dry very fast and make fuel for forest fires” said the Nova Scotia government in a statement Tuesday. “Coupled with low humidity and high winds, fires can spread quickly, and they can be difficult to get under control.”

Volunteer firefighter Andrew Doucette hasn't been battling the wildfire, but has been helping knock down smaller ones in the area around the village of Quinan, N.S.

"It’s dry. It’s because it hasn’t turned green yet, but at least the ground isn’t really dry, so it’s not burning deep into the ground, but it’s still sweeping," he said.

"It looks like a big pile of smoke over the horizon. At times you couldn't see too far off across the lake ... it was really cloudy with smoke. You could tell it was a big fire."

Thank you to the volunteer firefighters, DNRR staff, pilots, and other organizations fighting the forest fire burning in remote Yarmouth County. Please be safe.

Burning is restricted in all other Nova Scotia counties until 7 p.m. Wednesday.

Nova Scotians are urged to check burn restrictions before starting a fire.

Environment Canada said easterly winds would continue Wednesday, pushing the smoke to the west, which may lead to reduced air quality.

In a statement, the department cautions that people who are exposed to the smoke, may experience coughing, throat irritation, headaches or shortness of breath. Children, seniors, and those with cardiovascular or lung disease, such as asthma, are especially at risk.

The Yarmouth Regional Hospital has established an incident management team to monitor issues related to air quality. The team has met several times over the last few days and continues to monitor the fire and any smoke-related issues.

Katie Babin, a respiratory therapist at the hospital, says some individuals will be more susceptible to smoke-related issues than others.

"Obviously we have some concerns with the air quality," she said. "Anyone with COPD or chronic obstructive pulmonary disease and asthma as well."

"A marine air mass moved into the province Tuesday night. This has turned the area cloudier, with an increase in the general level of moisture in the air," explained Mitchell. 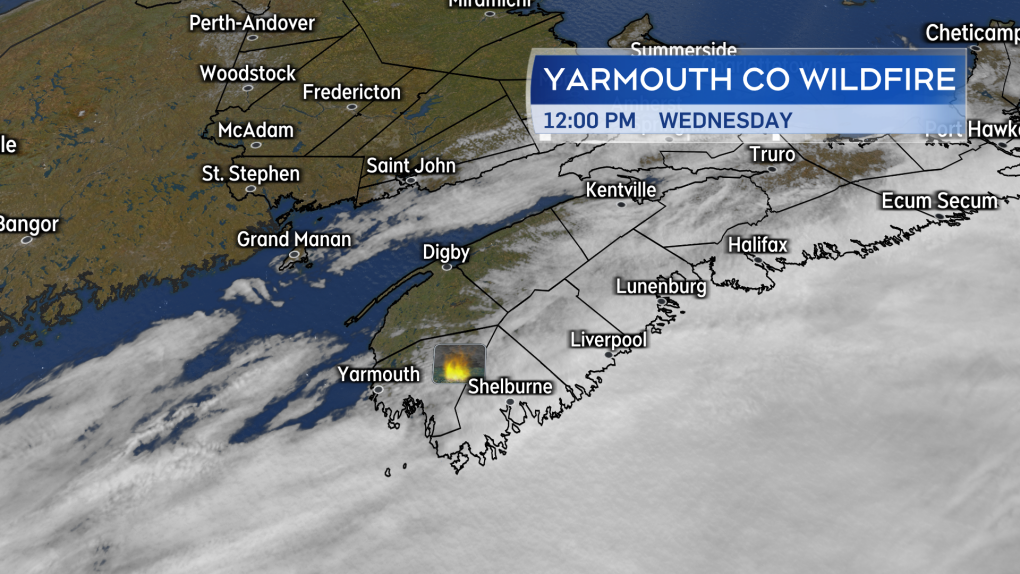 Air sourced off the Atlantic ocean moved into Nova Scotia Tuesday night. The result has been increased cloudiness, a low chance of showers, and higher relative humidity for Wednesday.

He says there's also a low chance of a shower or drizzle Wednesday afternoon. However, it won’t bring enough rain to be of significant help.

Wind speed is down about five to 10 kilometres per hour from Tuesday. A further easing of the wind is forecast for Wednesday night. 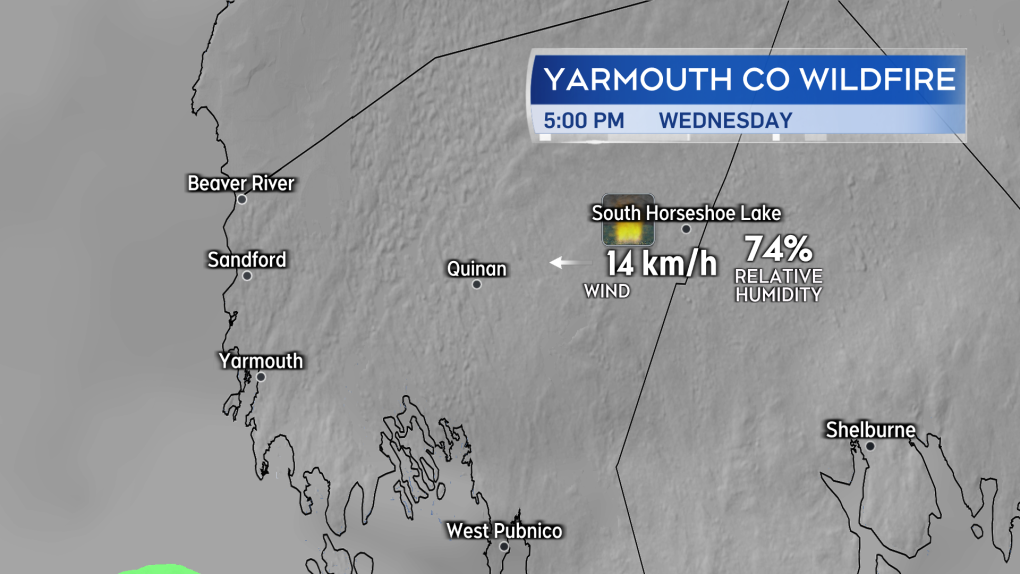 While five to 10 kilometres per hour lighter than Tuesday, a steady, easterly wind will blow into Wednesday evening. That wind eases to become light in the night.

Mitchell's forecast for Thursday shows clearing in the morning, followed by mainly sunny conditions in the afternoon.

"Relative humidity will fall back to near 50 per cent," said Mitchell. "Wind will become northwest 10 to 20 kilometres per hour. The change in the wind direction means smoke will be blown towards Shelburne County Thursday." 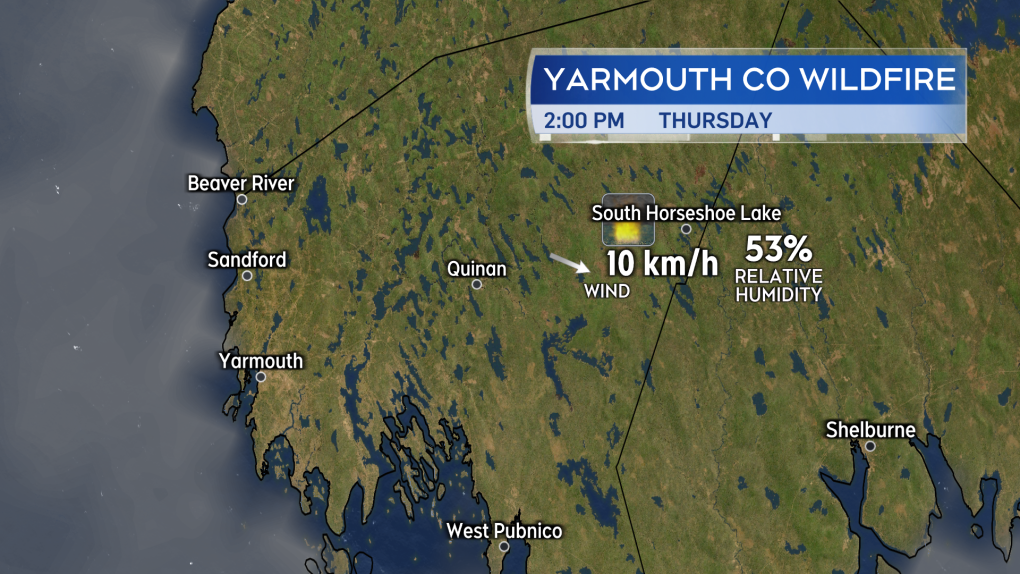 A clearing sky and fall in relative humidity is expected Thursday. The wind becomes northwest 10 to 20 kilometres per hour and should blow the smoke towards Shelburne County, N.S.