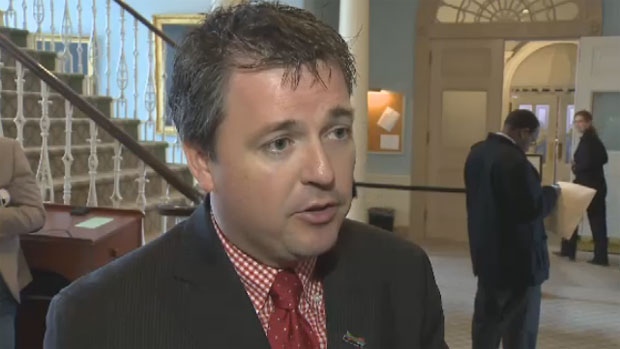 HALIFAX -- A senior Liberal cabinet minister in Nova Scotia has been accused of violating the province's Conflict of Interest Act by allegedly misleading the public about how much the province has spent on the money-losing Yarmouth-to-Maine ferry.

D'Entremont alleges Samson violated the act last Thursday because the minister was "not truthful or forthright to the public" when responding to reporters' questions about Nova Star Cruises.

The letter says Samson was unequivocal when he said the government had not given the ferry operators more than the $26 million in public funds already disclosed.

However, d'Entremont said Samson wasn't being truthful because the minister confirmed on Thursday he had known about $2.5 million in additional spending since Dec. 23.

"Truthfulness is the touchstone of our democratic system," d'Entremont says in the letter.

"It is what Nova Scotians expect and deserve of their elected officials. A failure to be forthright is a betrayal of the trust Nova Scotians put in elected representatives and a clear violation of the Conflict of Interest Act."

A call seeking comment from Nunn's office was not returned Friday.

"I completely disagree, but out of respect for Nunn's office ... I will certainly await to see what further actions that (he) wishes to take," he said.

"I've spent 17 years serving the people of Nova Scotia and I will certainly do my best to restore the confidence (of the public) if I've lost any as a result of this."

Under Section 18 of the act, ministers are required to be "truthful and forthright and not deceive or knowingly mislead the house of assembly or the public."

Defending his actions, Samson said he had planned to publicly disclose the spending, but not until he could make an announcement that included good news about the ferry's pending operating schedule.

But when that good news failed to materialize, Samson instead revealed the information last Sunday when he issued an unrelated statement about a snafu with an audit of the ferry's costs.

The minister has been out of the province on government business since the beginning of the week, but he agreed to take part in a conference call with reporters Thursday as questions were raised about the new spending.

At first, Samson said he had misspoke last Thursday when responding to questions about the latest costs related to the ferry.

But he then explained that even though he had known about the additional spending since December, he chose to withhold that information until he had something good to say about the ferry.

He said no announcement was made when the spending decision was made Dec. 23 because there were concerns that the timing would be seen as inappropriate.

The province's taxpayers have now spent $28.5 million for the service, which includes a $21-million loan that was spent in the first two months of the inaugural sailing season. That loan was supposed to last seven years.