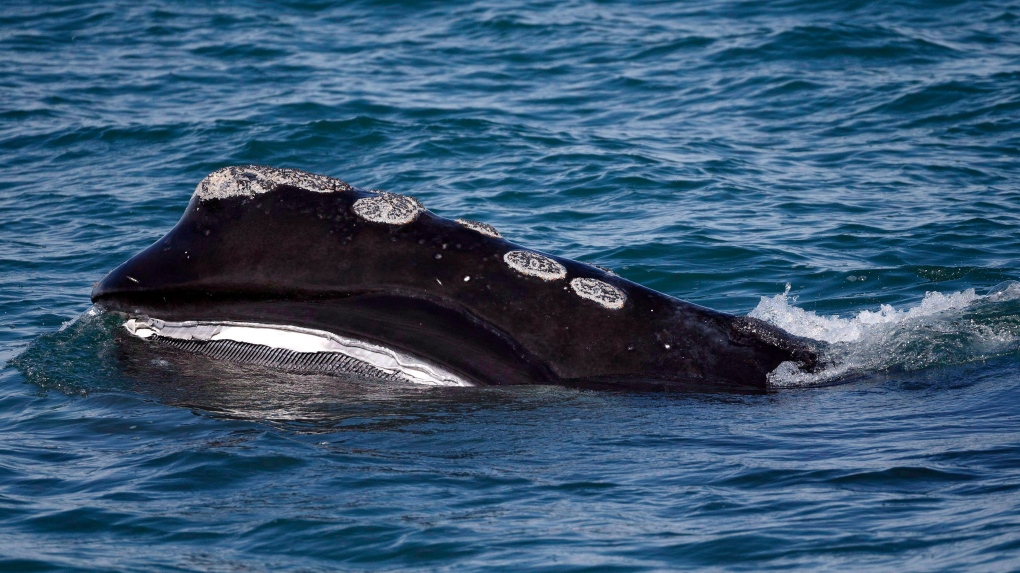 Baleen is visible on this North Atlantic right whale as it feeds on the surface of Cape Cod bay off the coast of Plymouth, Mass. The first newborn of the year has been spotted off the coast of Florida and is heading north with its mother, a known resident of the Gulf of St. Lawrence. (THE CANADIAN PRESS/AP, Michael Dwyer)

The first North Atlantic right whale calf of the winter season has been spotted off the Florida coast heading north with its mother, a known resident of the Gulf of St. Lawrence.

The Florida Fish and Wildlife Conservation Commission says on Facebook that the two endangered whales were sighted near the mouth of the state's St. Johns River.

It says the mother -- referred to by her catalogue number, 2791 -- was spotted five days earlier off the Georgia coast.

Right whales typically migrate south from the North Atlantic to give birth off the coasts of Georgia and Florida from December through March.

Melissa Munro, a spokeswoman for the Sierra Club Canada Foundation, says in a statement that no newborns were recorded last year, and the population sits at a critically low number.

She says the population has been downgraded to 411 -- only 71 of which are females that could potentially reproduce.

"This one baby represents a whole lot of hope," Munro said, adding that five females have been identified as possibly expecting calves.

But despite the "joyful" news, she said right whales are "not out of the woods. Not by a long stretch."

U.S. federal officials said earlier this month that last year was slightly worse than average for the entanglement of large whales, which is a major threat to marine populations.

The National Oceanic and Atmospheric Administration said entanglement in fishing gear, such as traps, nets and fishing lines, is a major concern for jeopardized species such as the North Atlantic right whale.

The Canadian government put in place measures to protect right whales after 17 of the endangered aquatic mammals died last year -- a dozen of them in Canadian waters.

Fishing areas were closed in the Gulf of St. Lawrence, speed limits were reduced for vessels and the Fisheries department increased surveillance of the area to look out for the whales.