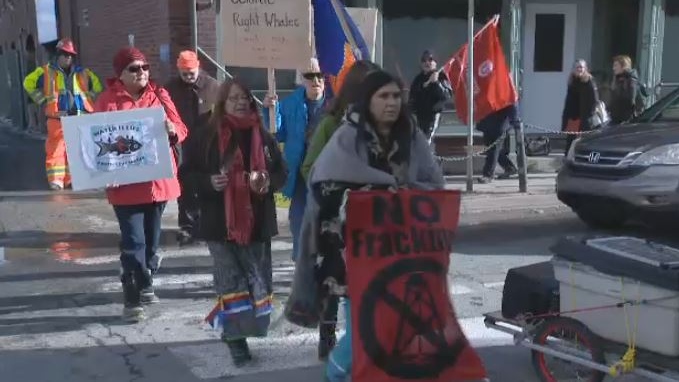 The Offshore Alliance staged a news conference and protest march in downtown Halifax on Jan. 24, 2018 to raise awareness about a federal discussion paper that says changes are coming to the way environmental assessments are handled for major offshore oil and gas projects.

HALIFAX -- Prime Minister Justin Trudeau appears poised to break a key election promise regarding the environment, a coalition of about 20 environmental and fisheries groups said Wednesday.

The Offshore Alliance, which includes members from Atlantic Canada and Quebec, staged a news conference and protest march in Halifax to raise awareness about a federal discussion paper that says changes are coming to the way environmental assessments are handled for major offshore oil and gas projects.

The paper, released in June, says Ottawa is considering streamlining the process to have it handled by one agency instead of three separate authorities -- a recommendation endorsed by the coalition.

However, coalition members said they are worried about a proposal that could see federal assessments conducted jointly with the federal-provincial offshore petroleum boards in Nova Scotia and Newfoundland and Labrador.

"We don't want the offshore petroleum boards to have any more powers over our oceans," said Gretchen Fitzgerald, national program director with the Sierra Club Canada Foundation. "We feel that any moves to make this happen would be a broken promise from the federal government."

Fitzgerald said the regulatory boards should not be involved because their roles as industry promoters put them in a conflict of interest when it comes to protecting the environment.

The federal government could introduce legislation within weeks, Fitzgerald said.

"We need a process in Canada that is legitimate so Canadians can legitimately feel that their oceans and environment are being protected," she said. "That's what this government was voted in on, and they should keep that promise."

During the 2015 federal election campaign, Trudeau promised that a Liberal government would make environmental assessments "credible again" by restoring oversight measures and ending the practice of allowing federal ministers to interfere in the process.

The coalition believes the two unelected boards will not act in the public interest because each has a mandate to promote offshore drilling.

John Davis, director of Clean Ocean Action Committee, cited the legislation that created the boards, saying their core purpose is to "provide a stable and fair offshore management regime for the oil and gas industry."

"They promote the development of offshore hydrocarbon resources and, by proxy, they act as advocates for the oil and gas industry," said Davis, whose group represents about 9,000 fish plant operators and fishermen in southwestern Nova Scotia.

"To assume that the boards can somehow combine this mandate with the authority to fairly assess environmental impacts is the height of folly."

Greg Egilsson, chairman of the Gulf Nova Scotia Herring Federation, said giving the boards joint responsibility for assessments would be "irresponsible and reckless."

In an email statement Wednesday evening, the Canadian Environmental Assessment Agency said any reforms to the assessment process "will ensure that the views of Canadian, as well as facts and evidence, will guide project decisions moving forward."