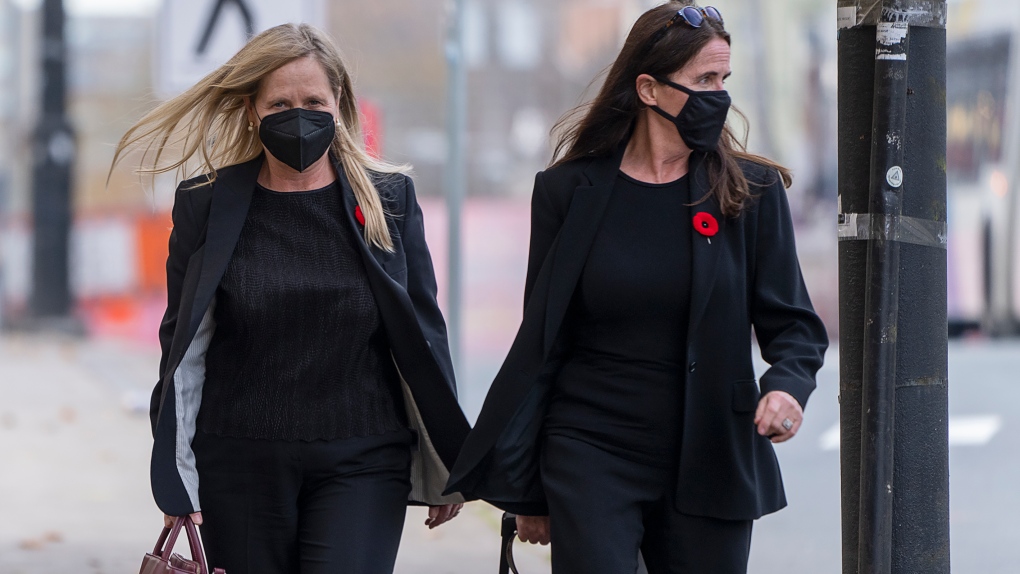 Tracy Kitch (left) the former chief executive of the IWK Health Centre, a children's hospital, walks outside provincial court with lawyer Jacqueline King during a break in Halifax on Monday, Nov. 8, 2021. Kitch is charged with breach of trust and fraud over $5,000 related an investigation into her expenses while she was the senior executive of the facility. (THE CANADIAN PRESS/Andrew Vaughan)
HALIFAX -

The director of finance at a Halifax children's hospital told a fraud trial Friday she was surprised when a major part of the former CEO's expenses had vanished from a publicly disclosed report.

Mary Lynn Van Tassel testified in the trial of Tracy Kitch, who has been charged with breach of trust and fraud over $5,000, in relation to her expense claims to the IWK Health Centre.

The financial officer said that when she prepared the former CEO's expenses in late 2016 for public viewing, she noticed they were "very high" compared to the expenses of the CEO of the much larger Nova Scotia Health agency. Van Tassel said the draft she prepared for the chief financial officer included costs such as thousands of dollars in flight passes, which are booklets of prepaid flights that can be used on short notice.

She told Halifax provincial court that after the expenses were posted publicly online in January 2017, she noticed her draft figure of about $34,000 had fallen sharply, adding that the list no longer contained large flight pass expenses. Van Tassel said the version of Kitch's expenses posted for public consumption for the period between April 2016 and December 2016 was $16,685.

"My initial reaction was, 'Wow, this has changed.' It was changed dramatically," Van Tassel testified.

"What had been taken out was the flight passes and it looked like there was obviously some of the pass costs were missing."

Kitch had started working at the children's hospital in August 2014 after moving to Nova Scotia from her home in Oakville, Ont. She left the hospital in June 2017.

In 2017, the hospital ordered an investigation after CBC revealed discrepancies in Kitch's expenses. The hospital's report concluded that $47,000 in expenses charged to the hospital had been deemed by auditors as "potentially personal." All the money was repaid by the time Kitch stepped down that summer.

The Crown said last week in its opening statement that it will focus on 68 transactions by Kitch between 2014 and 2017, including for flights between Toronto and Halifax.

During cross-examination, defence lawyer Jacqueline King suggested to Van Tassel that the chief financial officer at the time, Stephen D'Arcy, had told her that parts of the travel expenses were for educational purposes, which she said potentially justified their removal.

Pressed on whether Kitch had ever openly lied to her about expenses, Van Tassel replied that the CEO had often seemed to shift her story when questioned.

"I can't give you specific examples, but I can tell you that through the whole course of this, the stories changed, and I can tell you it made me very uncomfortable ... It was to the point I had to call in sick one day because I didn't want to go to a meeting (with Kitch)," Van Tassel said.

Phil Otto, who was the chairman of the IWK board from October 2013 to October 2016, testified Friday afternoon that he was responsible for overseeing Kitch's travel expenses. He said he hadn't reviewed the IWK's policy on use of corporate credit cards, but he said he was aware the cards shouldn't be used for personal travel.

Otto said he reviewed Kitch's expenses regularly and checked to see if her receipts matched the expenses on the credit card bills. He said if he had believed they were improper, he would have questioned why they were on the IWK credit card and would have asked that they be reimbursed.

The former chair also testified that he didn't recall Kitch ever notifying him that she was purchasing flight passes for personal use, taking taxis for personal trips, or booking hotels for family members. He acknowledged, however, that there were some notes attached to expense reports indicating Kitch would reimburse certain expenses.

During cross-examination, Otto said he believed Kitch had done a good job in her role as chief executive. She effectively handled a potential lawsuit by physicians against the hospital, he said. Otto added that Kitch was "extraordinarily busy," and he said he had no recollection of Kitch ever lying to him.

This report by The Canadian Press was first published Nov. 19, 2021.