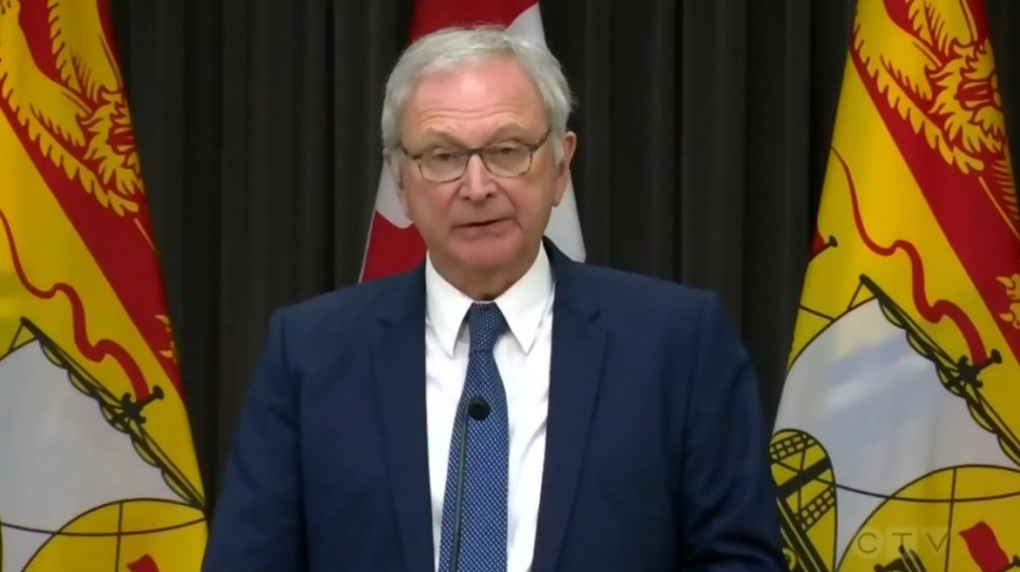 New Brunswick Premier Blaine Higgs provides an update on COVID-19 during a news conference in Fredericton on April 28, 2020.

FREDERICTON -- Farm groups in New Brunswick say a new restriction on temporary foreign workers couldn't have come at a worse time and will have a major impact on food production in the province.

"For now it is too risky to allow a greater number of people to enter the province," Higgs said.

"Under normal circumstances, we welcome foreign temporary workers, as they play an important role in New Brunswick's continued economic growth," he added. "But right now, the risk of allowing more people to enter the province is simply too great."

This restriction does not affect the status of about 1,500 temporary foreign workers currently in the province.

Rebeka Frazer Chiasson, president of the National Farmers Union in New Brunswick, said the skilled labour is not easily replaced, and many farmers will reduce their risk by limiting the amount they plant.

"For a lot of farmers there's already a lot of seed planted in greenhouses. A lot of the work has already begun, and this just puts them in such a precarious, unstable position where they are going to have to take decisions about cutting production or taking some huge risk with their farm," she said in an interview Wednesday.

Frazer Chiasson said the decision came as a surprise, with no explanation from government.

"Why is it that we're the only province that has taken that approach when everywhere else has taken an approach of being cautious, and safe, but putting measures in place to not put our food system and food production at risk?" she asked.

Ron Ryder, a spokesman for the P.E.I. Department of Agriculture said employers have to take measures to protect the health of the workers and allow physical distancing. The workers must self-isolate for 14 days upon arrival. There were about 1,400 temporary foreign workers on the Island last year.

Nova Scotia Premier Stephen McNeil, whose province imposed strict border measures on March 23, said there is currently no consideration of further steps such as those put in place in New Brunswick.

McNeil pointed out that strict protocols are already in place requiring temporary foreign workers to self-isolate for 14 days upon entering the province.

"They have become an important part of the agriculture and fishing industry," he said. "We continue to talk about what the future will look like and we will watch what other provinces are doing."

New Brunswick Agriculture Minister Ross Wetmore said the new restriction was imposed to help protect the health of people in the province. He said some temporary foreign workers already in the province are not working, so he has asked farmers to outline their labour needs.

Wetmore said the labour shortage could also be a chance for students and others to earn extra money.

But Frazer Chiasson said people who are temporarily unemployed could be called back to their regular jobs at any time, and farmers could be left short-staffed during harvest. She said New Brunswick only produces about eight per cent of the food consumed in the province, and the new restriction will likely reduce that number.

On Wednesday, New Brunswick reported no new cases of COVID-19. Chief medical officer of health Dr. Jennifer Russell said there are just four active cases, and only one of those is in hospital.

Nova Scotia reported one new death related to COVID-19, bringing the total to 28. The death occurred at the Northwood long-term care home in Halifax. The province has also identified 20 new cases of the virus Wednesday, bringing the number of confirmed cases to 935.

What happens if I catch coronavirus? How COVID-19 typically progresses

Snowbirds to boost morale amid COVID-19 with cross-country tour