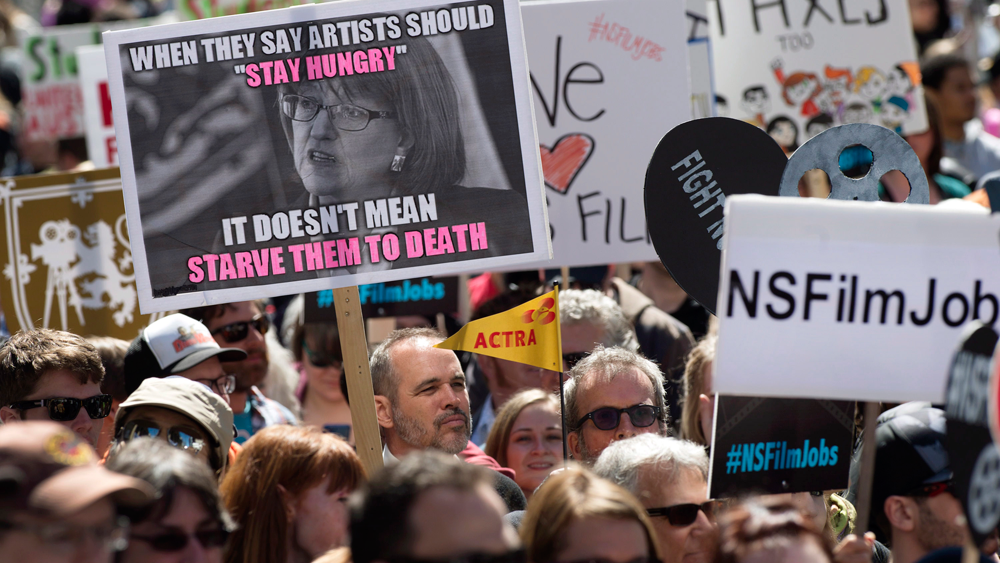 Members of Nova Scotia's film and television industry protest outside the legislature in Halifax on Wednesday, April 15, 2015. (THE CANADIAN PRESS/Andrew Vaughan)

HALIFAX -- A prominent international producer has encouraging words about Nova Scotia's future as a film production centre, despite concerns over changes to the province's tax incentive scheme.

Enrique Posner is the Madrid-based producer of "The Healer," the last feature film to be made in Nova Scotia under the province's previous film tax credit replaced on July 1.

Production wrapped up Wednesday on the $6.5-million film shot in Lunenburg, Aspotogan and Halifax.

"The previous rule was basically a very favourable one to producers and I think that's one of the reasons why you had a pretty steady flow of films coming to Nova Scotia," said Posner.

Under the former program Posner said his production stands to get a rebate of 50 per cent of its labour costs. He said that means the film will recoup just under $1 million after spending around $4 million in Nova Scotia.

With the province's new film and television production fund, projects can get a 25 per cent refund of all production costs including labour.

Although he didn't do extensive calculations Posner said "The Healer" would have seen a rebate of about 20 per cent less than it's currently getting. He said the reduction would have been offset by the quality of locations and production talent in Nova Scotia.

"That would not have been an amount of money that would have dissuaded us from coming here," Posner said.

However, he believes the furor over changes announced when the government tabled its April budget has created uncertainty within the industry.

Posner said work has to be done to create stability and continuity around the new rules in order to boost confidence that Nova Scotia is still a place to do business.

"My feeling is the new incentive scheme is very workable and can go a long way towards helping keep films and television shows coming back to Nova Scotia," he said.