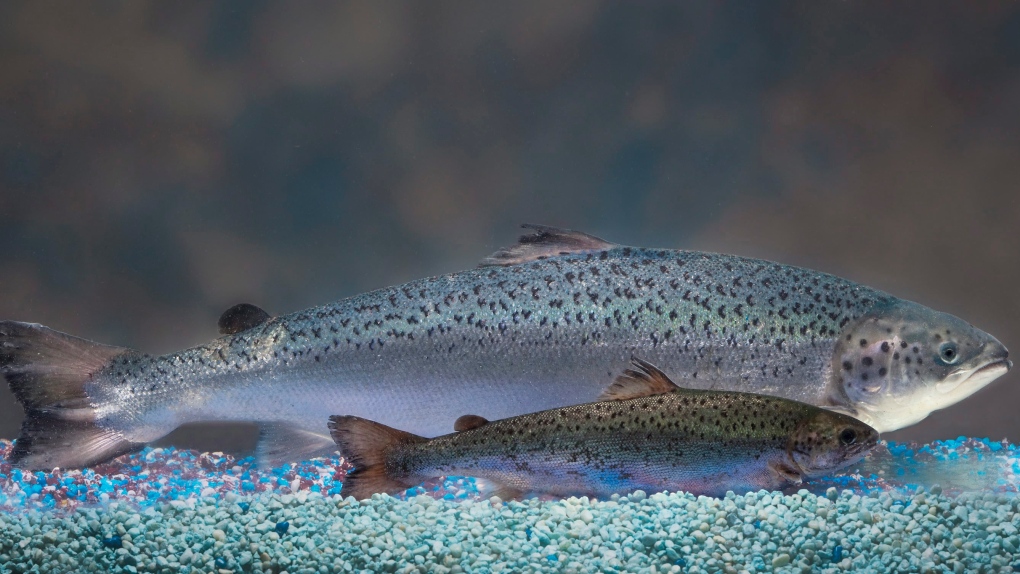 A U.S. company hoping to commercially produce genetically modified salmon eggs in Canada says it has cleared a major hurdle in its proposal to make the fish available for human consumption, a possibility that has critics worried about the prospect of "frankenfish" escaping and endangering wild Atlantic salmon around the world.

Environment Canada's conclusion that the eggs are not harmful to the environment or human health when produced in contained facilities marks a significant step for Aquabounty Technologies, the company's CEO said Monday.

But Ron Stotish said the hatchery in Souris, P.E.I., is still waiting for decisions from Health Canada and the U.S. Food and Drug Administration before the fish and eggs are available for sale.

"We would be regulated as a novel food in Canada for actual consumption of the fish and that is a separate approval process," Stotish said.

"At the moment, everything is still as it was. It's only the status of the facility moving from research and development to essentially a facility that could be used for commercial purposes."

But Aquabounty's plans have drawn opposition from some state lawmakers in the U.S. including Alaska, and from environmental groups who fear that the genetically modified fish could escape their onshore farms and put wild populations at risk.

In February, the public response was so strong that the U.S. Food and Drug Administration announced it was extending its comments period on its preliminary assessments of the fish, which found they posed no significant environmental impact.

Lucy Sharratt of the Canadian Biotechnology Action Network said Environment Canada's decision is alarming because it was made without any public consultation and could help clear the way for the commercial sale of the world's first genetically modified food animal.

She said Ottawa's decision is a surprise given that federal officials hadn't indicated publicly that a review was underway.

"The announcement is a huge surprise in that even after repeated requests (for information) we were never told that this decision was even being taken."

In an email, Environment Canada said the decision was made by departmental scientists "based on a thorough scientific evaluation of the latest evidence and studies." The department also said that the federal government has effective regulations in place to protect the environment and human health from potentially adverse effects of genetically engineered organisms in Canada.

Stotish said Aquabounty's proposal was subject to a risk assessment conducted by Fisheries and Oceans Canada involving a panel of independent experts in transgenics and fish containment technology.

The sterile, all-female eggs were developed at Memorial University in Newfoundland and at the University of Toronto, and produced at the hatchery in P.E.I., while the fish are reared in Panama.

The process sees the Atlantic salmon egg modified with genes from chinook salmon and an eel-like fish called the ocean pout. It makes the fish grow twice as fast as conventional fish.