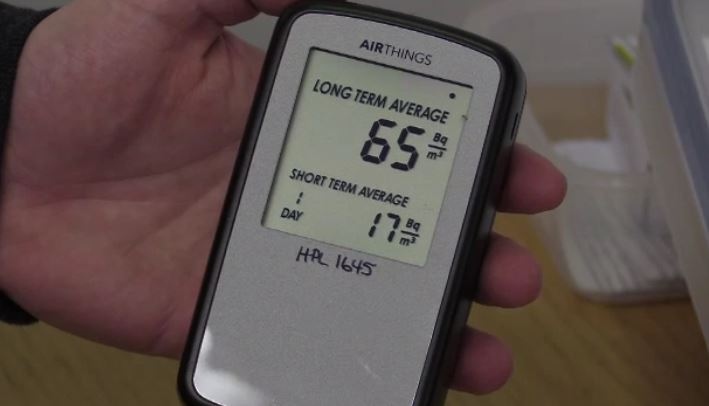 A radon detector is seen in this file photo. Radon is believed to be responsible for killing more than 3,200 Canadians each year.

HALIFAX -- A national study led by researchers in Halifax is looking at the effects of radon gas and arsenic exposure on the human body and examining ways the knowledge gained can assist health policy in Canada.

Dr. Graham Dellaire, a professor in Dalhousie University's department of pathology, is leading a team of experts from across the country in examining the two primary environmental exposure carcinogens that affect people's risk of getting cancer.

Researchers, Dellaire explained, are hoping their study will help doctors better communicate the risks of arsenic and give patients the desire to have their blood or toenails tested for exposure -- just as they would have their cholesterol tested for the risk of cardiovascular disease.

"They (doctors) could tell you this is your pathology exposures to arsenic and radon and these are the lifestyle choices you can make now to protect yourself," he said in a recent interview.

Recent studies have indicated that exposure to dangerous amounts of arsenic and radon contributes to 3,500 cases of lung cancer in Canada per year. Dellaire says he hopes his study will help elevate the public's knowledge of the potential dangers.

"This is completely addressable," Dellaire said. "People are getting the message on radon but we have not gotten the message on arsenic yet and both of these are avoidable, high-impact carcinogens in our environment."

Arsenic is in our drinkable water supply, our soil and in shellfish, he said, adding that anyone who lives near a gold mine can be exposed to it because of the effluent that is produced.

Dellaire said arsenic is a particular problem in Atlantic Canada, where many people are on well water. "It's estimated that 20 per cent of wells are contaminated with higher than what is considered a safe level of 10 parts per billion of arsenic in water," he said.

The study is looking to build on a previous epidemiological research indicating that the national standard should be lowered to five parts per billion because of the risks of sustained exposure, Dellaire said.

Canada generally has high radon gas levels because of the country's geology, which features large deposits of granite containing uranium. The gas from the deposits can seep into the open basements of homes leading to prolonged exposure.

But unlike arsenic levels, which can be measured in people's toenails up to three months after exposure, Dellaire said there is no equivalent test for detecting levels of radon.

That may be about to change, however, after the research team received over $2 million in funding from the Canada Foundation for Innovation, which Dellaire said will be used to build a metal-free mass spectrometry facility at the University of Calgary, were study co-lead Aaron Goodarzi is based. The facility will help measure the minute amounts of radioactive lead that are a residual breakdown product of radon exposure.

The lead has a half-life of 22 years and Dellaire said the ability to measure it in blood, urine or tissue samples would provide a look at nearly a lifetime of exposure to radon.

Another portion of the funding will be used to maintain an existing facility in Halifax that measures arsenic and to build a new facility in 2022 to support tumour banking, which is the process of storing tumour and blood samples.

Dellaire said researchers are already looking for signatures in tumour tissue for past arsenic exposure in order to understand the history of various cancers and how they develop.

"It probably will have an impact on your therapy and how effective your therapy is," he said of the information gathered from the studies.