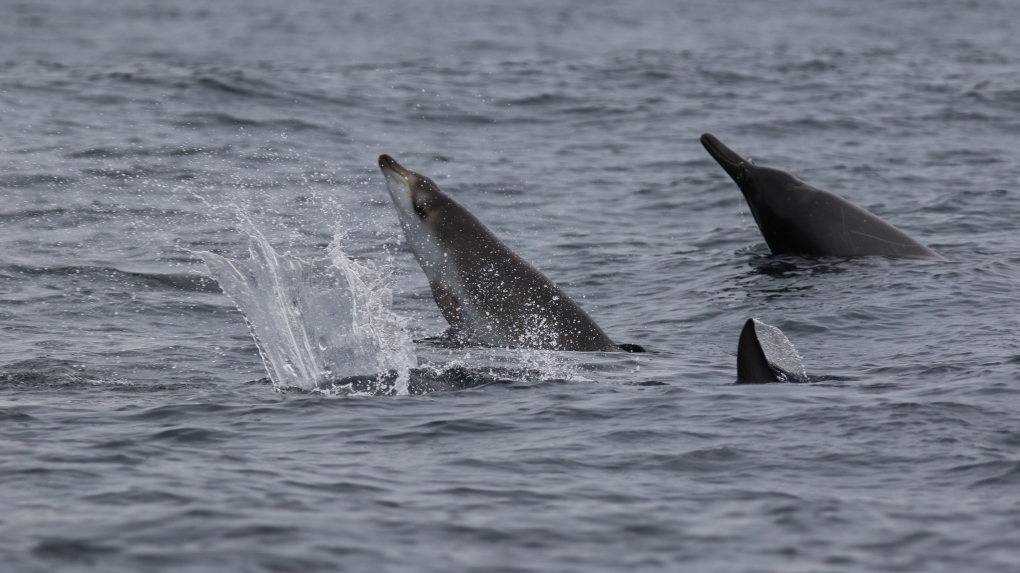 Sowerby's Beaked whales are seen in an undated handout photo in a marine protected zone off the Nova Scotia coast. (THE CANADIAN PRESS/HO-Dalhousie University, Whitehead Lab)

HALIFAX -- A human-made racket under the ocean is a growing threat to three types of whales off the East Coast, Canadian scientists say.

The Committee on the Status of Endangered Wildlife in Canada released its findings Monday on the sei whale, fin whale and Sowerby's beaked whale following a gathering of 43 scientists in St. John's, N.L.

The independent scientists say the continuing low numbers of the sei whale following decades of whaling led them to ask for an endangered designation -- meaning the species is facing "imminent extinction."

They also recommended to the federal Fisheries Department that fin whales and the Sowerby's beaked whales should continue to be designated as species "of special concern." Both already have this status under the Species at Risk Act, meaning they may become endangered if nothing is done.

Hal Whitehead, co-chair of the marine mammals sub-committee, says relatively little was known about how the sei whale was faring in the Atlantic since the end of commercial hunts in the early 1970s -- less than a lifetime ago for the third-largest whale on Earth.

But when the whale scientists dug into the data, they found the animals were still faring poorly. Whitehead said 40 years after the end of whaling, there are still only "a few hundred" of the sei whales left.

As with the other two species examined, much of the blame went to deaths from fishing gear entanglement and strikes by large ships in the Atlantic Ocean and the Gulf of St. Lawrence.

However, the assessors have also documented growing levels of noise from ships, navy vessels and ongoing seismic exploration for oil and gas off Canada's coast, and concluded they are harming the whales' ability to communicate.

The precise figures on human-generated noise have not yet been publicly released.

"It became apparent to all of us the magnitude of the threat that these species ... face in the waters of Atlantic Canada," said Whitehead in a telephone interview.

"In particular, the growth of the noise that we are putting into the water."

The scientist said the data indicated more ships are traversing the areas of whale habitat, but one of the largest contributors is seismic oil and gas exploration off Newfoundland and Labrador.

"These are extremely noisy operations and we're getting more information that this noise is serious for these animals because they are acoustic animals. That is how they sense their environment and how they communicate with each other," he said.

The Sowerby's beaked whale, which is slower and smaller than the fin and sei, is believed to be particularly susceptible to noise.

The committee says that much like bats, the Sowerby's beaked whale uses sound to navigate and to hunt, and human-generated noise impairs its ability to find its way.

Whitehead says the hope is that the federal government will take steps to protect habitat for the whales by adding to the size and number of marine protected areas.

He said he's observed increasing numbers of Sowerby's beaked whales in the Gully submarine canyon off Nova Scotia since it was made a marine protected area 14 years ago.

"I suspect it may be because it's quite a quiet place," said the marine biologist.

A Sept. 9, 2015, research paper in the Marine Pollution Bulletin noted that sound plays an important role in mating, the rearing of young, social interaction, group dynamics and feeding.

Marine mammals often rely on sounds to find prey and to avoid predators.

The paper says that one of the largest problems is known as "auditory masking," where a larger sound from a ship or seismic vessel hurts the whales' ability to detect or recognize a key sound of interest.

If Ottawa adds the sei whale to its list, it will join with a variety of other iconic whales facing the risk of extinction in Canadian waters, including the blue whale, the North Atlantic right whale and killer whales in the Pacific.

The federal Liberal government has been addressing some concerns about whales through its oceans protection plan, which includes measures to reduce underwater noise and increase marine protected areas, said a spokesperson for the federal fisheries minister.

"When we came into office in 2015, less than one per cent of our ocean was protected. Today, we have raised protections to 8.27 per cent, bringing Canada one step closer to achieving our international marine conservation target of 10 per cent by 2020," wrote Jocelyn Lubczuk in an email.

She also noted that since the fin whale off Canada's Pacific coast was listed as threatened in 2006, the population has improved and as a result the scientific committee has now reassessed it as being in the "special concern" category.