'It's all about exploration': New Discovery Centre opening in Halifax 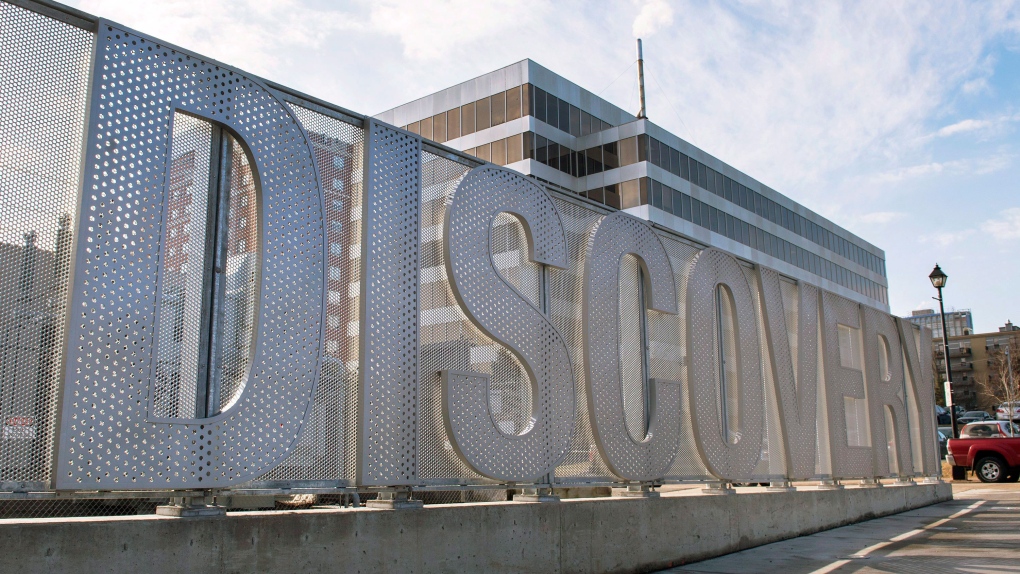 The entrance to the Discovery Centre, an interactive science museum, is seen in Halifax on Monday, Jan. 30, 2017. The newly constructed $20-million facility is seeking to attract people of all ages with travelling exhibits, interactive astronomy shows and invention workshops. (THE CANADIAN PRESS/Andrew Vaughan)

HALIFAX -- It's hundreds of millions of kilometres from Earth, but Jupiter's Great Red Spot is luminous inside a theatre-style immersive dome at the Discovery Centre in Halifax.

Many corners of the universe are accessible from the comfort of the planetarium's 65 cushy chairs -- everywhere from Singapore's night sky to Orion's Belt.

But there's one place audiences are always eager to see: Earth.

"You can show people any cool simulation or image of space, but honestly, nothing is as staggering as the hovering above Earth," said Japna Sidhu-Brar, the dome's full-time presenter who uses data from the Hubble Space Telescope to create custom-built audio and visual experiences.

"The software is amazing. You're getting a very accurate simulation of the solar system, of the planets, of the universe itself."

The new three-level Discovery Centre -- which bills itself as a hands-on science centre -- is set to open Feb. 12.

It was a staple on Barrington Street for more than 25 years before moving into the newly constructed $20-million facility on the Halifax waterfront.

The old centre was aimed primarily at children and their families, but the new Discovery Centre is seeking to attract people of all ages with travelling exhibits, interactive astronomy shows and invention workshops, said Dov Bercovici, president and CEO of the centre.

"There's experiences for everyone," said Bercovici in the atrium, which offers expansive views of the centre's three levels and is illuminated by several large, beachball-esque lights that periodically change colour.

"We want to encourage the public, of any age, to understand the science of their daily lives. People can even come here on date night."

The centre's bottom floor is where travelling exhibitions will be set up for three- to four-month stopovers.

The first exhibit is one that explores the scientific side of music -- from the physics of guitars and drums to why certain notes sound more pleasing than others.

"We really believe that science and art are essential to each other," said Bercovici just after strumming a G chord on an electric guitar in front of one section that details the history of the six-stringed instrument.

Tucked into the back corner of the bottom floor is a workshop-style room dubbed the "innovation lab." Inside on a recent day several people are sitting on stools and hovering over long wooden tables. Dozens of simple circuit boards -- made from nails and blocks of wood -- are scattered throughout the brightly lit space.

It's here where visitors will be able to learn how to invent and fabricate things like a potato battery or drone.

"It's all about exploration," said lab co-ordinator Ryan Jameson just before showing off some newly 3D-printed art, including a scorpion equipped with a moving tail.

"The whole centre is about being curious and staying curious because that is the first step to discovery."

On the second floor guests are greeted by a life-size yellow Piper J-3 Cub, a lightweight aircraft first produced in 1938. It's part of three themed galleries: flight, health and energy. Each section features interactive and hands-on activities that teach about the science behind our society, such as harnessing tidal power and human anatomy.

Light pours in through large windows overlooking the Halifax Seaport Farmers' Market and the Halifax harbour on the top level of the centre, where the kids-only section is located.

There's a farm, supermarket and doctor's office -- all designed to teach children about how their cities function. Kids pull carrots and other vegetables from a soil bed and pop them through a window into the grocery store, simulating the "farm-to-table" movement.

It's also home to a relic from the original Discovery Centre: The ever-popular PVC pipe organ, which children slap with flip-flops to create music.

"Because it's hands-on, people want to stay longer. They're not just walking through and looking at things. They're getting involved and staying active," said Bercovici, descending noisy stairs that act like piano keys.

Every floor will be equipped with science, technology, engineering, arts and mathematics (STEAM) facilitators, who will be on hand to engage with visitors and offer new experiences on rolling carts.

The Discovery Centre opens for business on Feb. 12 and is located at 1215 Lower Water St.

Admission is $12 for adults, $10 for children and seniors, and children two and under are free. A family with two adults and two children costs $40.