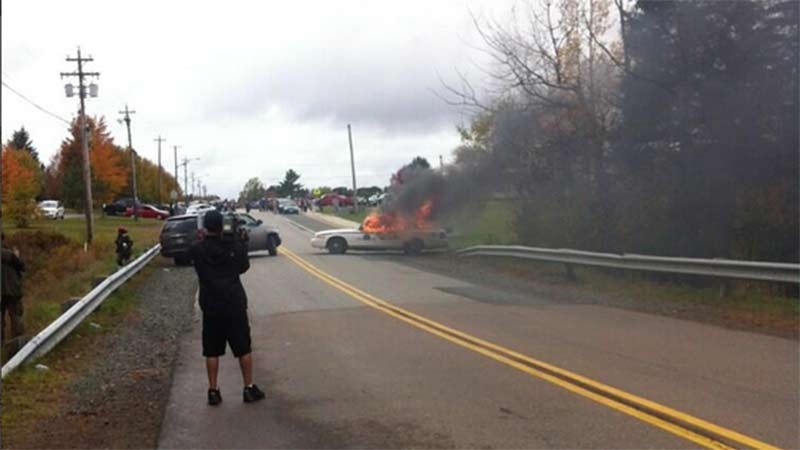 HALIFAX -- Justice Minister Peter MacKay is calling for an end to any confrontations and the resumption of talks to resolve a dispute over shale gas exploration in eastern New Brunswick.

Speaking in Halifax at a roundtable discussion on cyberbulling, MacKay says was briefed early today on the incidents Thursday near Rexton where the RCMP arrested at least 40 people.

The Mounties say the arrests were made after Molotov cocktails were thrown at officers and police vehicles were torched when officers began enforcing an injunction to end a weeks-long demonstration.

Const. Jullie Rogers-Marsh said at least five RCMP vehicles were destroyed after they were set ablaze and at least one shot was fired by someone other than a police officer at the site of the protest.

The RCMP began enforcing the injunction at around 7:30 a.m. to end the blockade of a compound where energy company SWN Resources stores exploration equipment.

Route 134 at Rexton and Route 11 between Richibucto and Sainte-Anne-de-Kent were closed to traffic for about 12 hours and schools in the area were closed early for the day.

Rogers-Marsh said police decided to enforce the injunction because threats had been made against private security guards at the site on Wednesday night. She wouldn't reveal what tactics police were using to contain the crowd and refused to comment on reports that officers had fired rubber bullets.

Robert Levi, a councillor with the Elsipogtog First Nation, said police pepper-sprayed dozens of people after he arrived at a protest site with the chief and council Thursday morning.

The RCMP blocked Route 134 on Sept. 29 after a protest there began spilling onto the road. Protesters subsequently cut down trees that were placed across another part of the road, blocking the entrance to the compound.