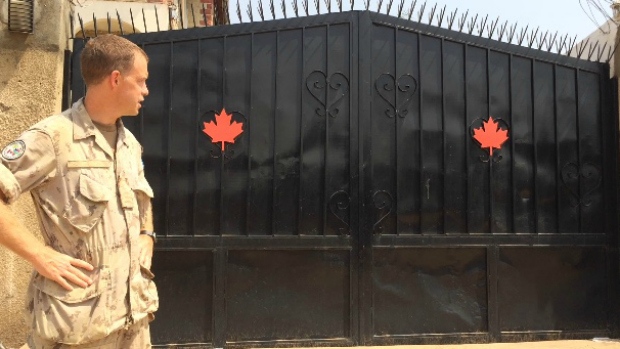 As my driver slowly makes his way around the large holes and boulders that litter Juba’s dirt roads, it's hard to miss. Just past a line of shops, a large iron gate bearing the Maple Leaf. Canada House, where Canadian Forces members live while deployed to South Sudan.

There are 12 of them in Operation SOPRANO, Canada’s contribution to the United Nation’s Mission in the Republic of South Sudan (UNMISS). The Canadians are among 7, 000 military personnel from 55 countries.

The Task Force’s Commander, LCol. Sean Ward and Capt. Philippe-Andre Genest have agreed to give me a tour.

“Our primary objective is to protect civilians, monitor humanitarian activities and also report on any atrocities or criminal activities that are happening within the region,” the Commander tells me.

Five of his staff are deployed in South Sudan’s troubled states.

“[They] are the eyes and ears of the United Nations commander, who are talking with the communities, finding out what’s going on in South Sudan, reporting any irregularities in conduct on both of the factions, the government and as well the in opposition force.”

The mission was one of nation building but has since shifted to peace keeping.

UNMISS was established in 2011 when South Sudan gained independence from Sudan but in December 2013, everything changed.

“We call it the crisis period,” says Ward. “The government started to target its own people, and at that juncture it became apparent that the government was part of the problem.”

Regardless, it is a mission Ward is proud of.

“As a Canadian solider it’s an outstanding opportunity to come to a continent that is extremely challenging…To be here to work along with our other colleagues, our allied nations who are here, it’s a good feeling to be side by side with our friends and brothers working towards peace.”

He is also proud of the soldiers’ self-sustenance. They raise chickens to lay their eggs, and grow their own lettuce, kale, broccoli, basil and corn. What do they use to keep the plants upright? Hockey sticks of course!

They receive thousands of cards and letters from Canadian children, that are proudly displayed on the walls of Canada House, a boost in morale during what can be difficult work.

What do they want Canadians to know?

“We really are representing the flag, the country, and doing our part towards helping out this new nation.”

A new nation, still very much struggling to find its way.