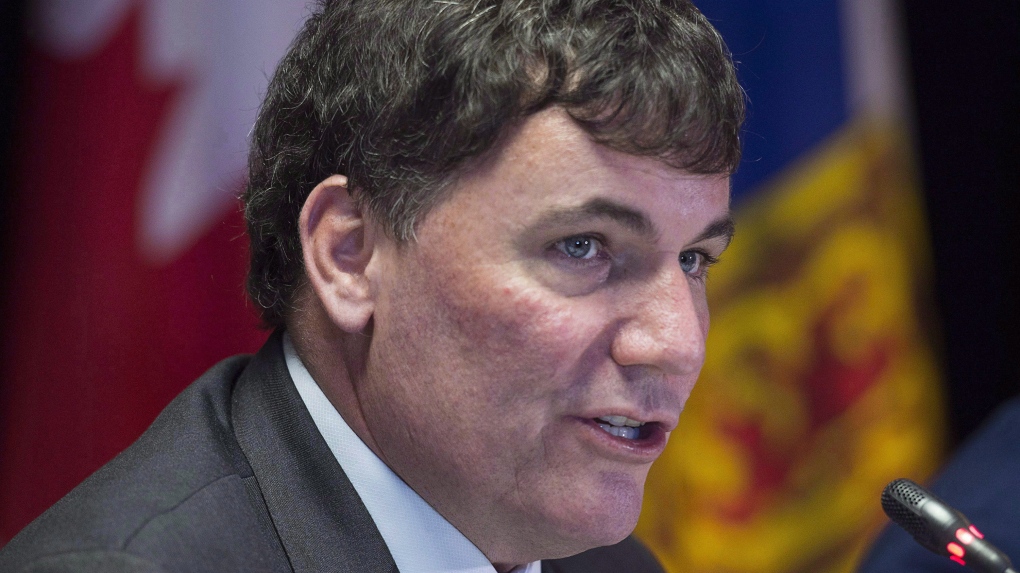 Fisheries Minister Dominic LeBlanc fields a question at a news conference at a meeting of Atlantic Canadian politicians dealing with regional economic growth in Moncton, N.B. on Feb. 20, 2018. THE CANADIAN PRESS/Andrew Vaughan

MONCTON, N.B. -- The federal fisheries minister made his case Friday to lobster fishermen that rules aimed at protecting the endangered right whale should remain -- with the alternative being a "disastrous" loss of access to the American market.

Representatives of lobster harvesters met with Dominic LeBlanc in New Brunswick to argue some of the newly imposed fishing restrictions make no sense and could have a devastating impact on their lucrative industry.

Carl Allen of the Maritime Fishermen's Union had said his members are worried the strict measures will result in significantly lower catches if certain areas are closed due to the presence of the imperilled whales.

The union asked for the emergency meeting with LeBlanc just ahead of Monday's season opening.

After the meeting, LeBlanc emerged to say the restrictions on fishing near whales are essential as there's a risk American agencies might restrict Canadian access to vital U.S. markets if they're changed.

"There is a building pressure in the United States and globally to look at the sustainability in the Canadian fishery in light of the death of North Atlantic right whales last year," the minister said.

"I cannot as federal fisheries minister ... make decisions that would be insensitive to that."

"I don't have to wait for somebody to tell me, 'Guess what on a certain date you've lost access to the U.S. market,' to take every measure that I can to prevent that disastrous moment from coming, and that's exactly what these measures are."

Asked by reporters about who in the United States is suggesting trade restrictions, LeBlanc said members of Congress have been writing to U.S. Commerce Secretary Wilbur Ross.

He said they're arguing that provisions of the U.S. Marine Mammal Protection Act -- which sets rules protecting marine life -- should be enacted in Canada sooner than an originally envisioned 2020 deadline.

"There is a movement in the United States at the highest level of the American government to look at how and when the law should apply," he said.

Carl Allen of the Maritime Fishermen's Union was not available for comment after the meeting.

However, he said beforehand that his group was concerned about the impact on their livelihoods if they lose up to three weeks of a two month fishing season due to the whales.

"How do you make that up?" he asked. "Everyone's on edge, everyone's anxious."

The group had been hoping to convince the minister to alter new rules around how the fishery will be conducted in an area known to be a right whale feeding area.

The new measures announced Tuesday by the Fisheries Department include possible closures, restrictions on the amount of rope used, and mandatory reporting of lost gear and whale sightings. A total of 18 North Atlantic right whales were killed in Canadian and U.S. waters last year -- mainly due to vessel strikes and entanglement in fishing gear.

The union is particularly concerned about so-called dynamic closures that occur when whales are spotted in an area, forcing it to be temporarily closed to fishing for a minimum of 15 days.

Allen says the measures are heavy handed and illogical because the whales haven't arrived in the Gulf yet and aren't thought to travel through some of the areas that will be subject to the closures.

Allen said the northwest corner of the static area is a very productive lobster and snow crab habitat, with an estimated 25 per cent of last year's total allowable catch of snow crab for the southern Gulf coming out of that area.

He said lobster fishermen are being lumped in with those in the snow crab fishery, which has been associated with more whale entanglements and is also subject to similar restrictions.

There are only about 450 North Atlantic whales left, and many spend their summers feeding in the Gulf. Experts have said that unless the numbers change, the species could become functionally extinct in less than 25 years.

- By Alison Auld and Michael Tutton in Halifax