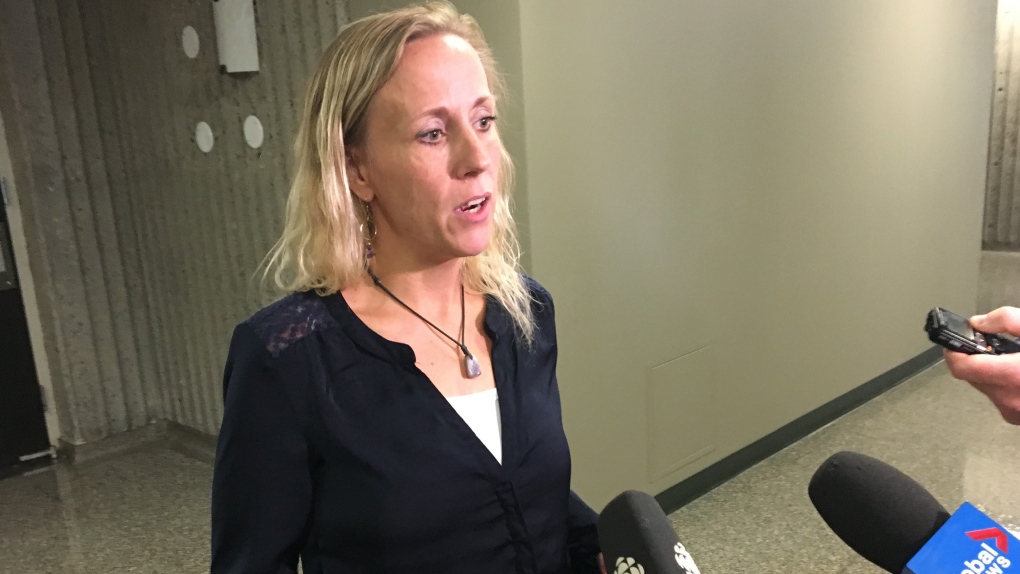 Carrie Low talks to media outside court in Halifax, Monday, Sept.16, 2019. Nova Scotia's attorney general says a call to increase the statute of limitations in complaints of police misconduct is "reasonable," adding he hopes to bring in legal reform this fall. Mark Furey said Thursday he's taken particular note of the case made by a Lowe, a 43-year-old woman who went public earlier this month with allegations the Halifax police mishandled their probe of a brutal sexual assault against her. (THE CANADIAN PRESS/Michael Tutton)

HALIFAX -- Nova Scotia's attorney general says a call to increase the statute of limitations in complaints of police misconduct is "reasonable," adding he hopes to bring in legal reform this fall.

Mark Furey said Thursday he's taken particular note of the case made by a 43-year-old woman who went public earlier this month with allegations the Halifax police mishandled their probe of a brutal sexual assault against her.

The Office of the Police Complaints Commissioner declined to refer Carrie Low's case for a hearing, saying the alleged police misconduct occurred more than six months before she brought forward her complaint.

Low has said police failed to visit the scene where the rape is alleged to have happened last April and also failed to properly handle her clothing as evidence.

Claudia Chender, an NDP member of the legislature, introduced an opposition bill on Thursday proposing a year be allowed to start a complaint against municipal police, as currently occurs in complaints against RCMP officers.

Furey said his department's lawyers will review the proposal, as well as other calls for reform.

The Halifax board of police commissioners has also called for an amendment of the police complaints process under the Police Act to be consistent with the longer RCMP limit.

"It's certainly reasonable to take a very close look at this piece of legislation. I don't know that it requires legislative change. It may be possible with regulatory change," said Furey.

"In this case, we've had a victim who has been very public and has advocated appropriately that the time frames be changed. I think it's a reasonable request."

Chender says Low's case has highlighted the urgency of legal change. "We think it's a pretty simple legislative gap and one that needs to be fixed," she said.

The NDP bill includes the so-called "principle of discoverability" in a statue of limitations, which means the time limit runs from the time when a person understands their case was mishandled by police.

Chender said that would contrast with the existing regulation, which begins the from the date of alleged misconduct of police, whether or not the person involved understood misconduct had occurred.

Halifax police have already announced that they are concerned by Low's allegations and the force is looking into them through an internal review.

Low has said she blacked out through much of the incident but has had brief and painful recollections of waking to being assaulted.

She said she also believes she was drugged while she was having a drink at a neighbourhood pub, but evidence to confirm details of what was in her blood wasn't immediately sent to a lab for processing.

Lawyers with the Elizabeth Fry Society are now attempting to have the decision against Low reversed and to have her complaint processed.

The Progressive Conservative party issued a news release saying they support legislative reform of the Police Act's statute of limitations.

"Our caucus is committed to giving survivors of sexual assault more of a voice. The gap between the Halifax Regional Police's six-month limitation period for complaints as compared with the one-year period of the RCMP's should be eliminated," said the party release.