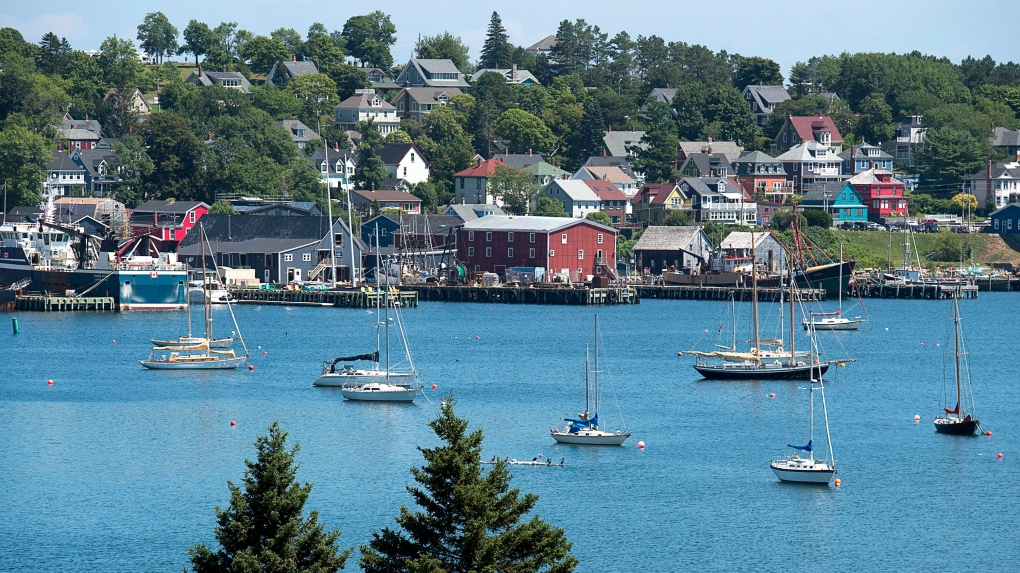 The harbour in Lunenburg, N.S., is seen on Friday, Aug. 3, 2018. The UNESCO World Heritage site is dealing with an unpleasant odour in the town related to their sewage treatment infrastructure. (THE CANADIAN PRESS/Andrew Vaughan)

LUNENBURG, N.S. -- A fetid smell is bedevilling one of Canada's most recognizable seaside communities at the height of tourism season, with residents saying they're often forced to roll up their windows and abandon their balconies.

Kevin Ernst lives on Lunenburg's back harbour and says he has had to leave his barbecue and go inside several times this summer because of a distinctly pungent odour he likens to a dirty diaper.

The 53-year-old former fisherman's home is directly across the harbour from the town's sewage treatment plant, something he claims is a blight on the community that has fouled the air and its iconic shoreline.

"It's disgusting and it's unhealthy," the long-time resident said in an interview. "I didn't buy here to smell (expletive) all the time. If it was cow, that's OK. But not human."

Some of Lunenburg's 2,300 residents say the 15-year-old plant is spoiling the scenic setting that is home to the famed Bluenose II schooner and was designated a UNESCO World Heritage Site for its brightly coloured buildings dating back to the 18th and 19th centuries.

The seafaring community is the third most visited site in the province, and has built a vibrant tourism industry that sees a steady stream of visitors through the summer and fall months.

But residents and business owners are becoming increasingly fed up with the stench and harbour waters contaminated by fecal bacteria that routinely exceed Health Canada guidelines and can pose risks to boaters.

Donna Selig, who works at the Bluenose Lodge bed and breakfast in Lunenburg, said guests ask more about the water quality in Lunenburg harbour and whether it's safe to go near it than they do about the odour.

"They're afraid and ask, 'Is it OK to go to the waterfront?"' she said Friday. "I did have one couple cancel a boat tour because they were afraid to go out on the water and getting splashed."

Lorne Johanson, who runs Alicion Bed and Breakfast, said he doesn't often smell the odour but when he does it's much like rotten eggs. Asked if it's affecting his business and the number of people visiting the area, he said he hasn't seen a drop in clientele yet.

"If it's rectified fairly quickly I think it's quickly forgiven and forgotten," he said Friday. "But if it's an ongoing thing, then slowly you build this reputation and it's pretty hard to kick and I think that's what's happening."

The longstanding problem of contaminants in the water gained attention last year when Bill Flower, an outspoken critic of the municipal government's handling of the harbour pollution, was accused of smearing sludge from an outflow pipe on the mayor.

Flower, who runs a tour boat company near one of the outflow pipes and often has his hands covered in the slime, has been pressing the town for years to clean up the harbour. He wants the pipe relocated closer to the mouth of the harbour, away from the busy waterfront that features a fisheries museum and other tourist spots.

The municipality launched a summer testing program for fecal contamination at several sites throughout Lunenburg harbour and along the waterfront, and is posting results on its Facebook page. One of the most recent tests showed that two of the three waterfront sites were well above federal secondary contact guidelines for the bacteria, known as enterococci.

"This means that water contact, through activities such as rowing, sailing, or fishing, poses a risk to human health due to the possible presence of pathogenic bacteria," according to the testing by Coastal Action, a locally based environmental organization.

"Individuals should exercise caution during water-based recreational activities in these areas."

Testing in five other sites closer to the mouth of the harbour found bacteria levels below Health Canada's primary contact guidelines.

Shanna Fredericks of Coastal Action, which is running the testing from June through to October, said there are many known and suspected sources for the bacterial contamination. That includes the sewage treatment plant's effluent, raw sewage being piped into the harbour from the Garden Lots community, possibly boating traffic and sediment on the harbour floor that likely contains bacteria.

The effluent from the plant is treated and meets provincial guidelines, but Fredericks said it still contains bacteria because the threshold is higher than certain federal guidelines.

"The treatment plant is working and they're meeting the regulations, but there is still bacteria in that effluent when it comes out," she said.

The municipality is installing a $1.1-million biofilter at the plant to reduce the odour, while also doing an engineering study on the plant and the sewage system it says will be published in the coming months.

Lunenburg town council issued a statement this week following several media reports chronicling the odour and contaminant problems. It said the issues are not unique to Lunenburg and that it is working to address them.

"We want to assure citizens and visitors that we are fully committed to continued monitoring, testing and sharing of the results," the statement reads. "The Town of Lunenburg is actively working to improve the water quality of our harbour."

By Alison Auld in Halifax