HALIFAX -- Everyone has a story and Uttara Deshpande’s is truly a remarkable one.

Spoiler alert: it comes with a uniquely Canadian twist.

“I’m proud of myself and my family,” said Deshpande. “They’re the ones pushing me.”

Her modesty aside, Deshpande has always pushed herself; in life, in her travels and on the ice.

Deshpande’s Canadian story begins in 1983. Born in India, she immigrated with her husband to Canada, where they raised their two sons in Nova Scotia. She says as a family, they quickly adapted to life in their new country. They made friends, enjoyed the culture, her husband carved out a successful career and as a family they quickly adopted an appreciation for local sports. One sport that caught Deshpande`s attention was curling.

“It looked easy when I saw it on the TV,” said Deshpande. “But ice made me nervous.”

She decided to try it, without much initial success.

“As soon as I saw the ice, I was just frozen. Literally my coaches were holding me up to get up,” said Deshpande. “I knew this is not going to work for me.”

Pushing those doubts aside, she persevered. Deshpande signed up for curling lessons and she joined her husband for early morning practices -- always striving to improve. In time, her peers began to take notice. Deshpande was getting better. Her hard work was starting to pay off.

Sport stories often come equipped with turning points. Deshpande’s pivotal moment in curling was being introduced to Stick Curling, which allows curlers to use a stick to send the rock down the ice, instead of the traditional method of delivering curling rocks while sliding low to the ice. The switch to the stick was a game changer for Deshpande.

“Once I got the stick and got the grip of my feet, I was comfortable.”

Comfort and subsequent improvement quickly led to opportunity. She was asked by a coach to play competitively in the 2018 provincial championship. But there was one lingering problem. Stick curling is a two-person team sport and Deshpande didn’t have a teammate. In the final days leading into the tournament, she was paired with Pauline Bullerwell, an experienced curler from Yarmouth, N.S.

“We met the day we were supposed to play in the tournament,” said Deshpande. “She said don’t be nervous. Just do what you can. We might win some. We might lose some.”

They didn’t lose any games.

Stunningly, Uttara Deshpande -- a newcomer to a sport that she had just started to play several years earlier -- was the 2018 Nova Scotia Women’s Stick Curling Champion.

“Chemistry happened. We made good shots,” said her teammate Pauline Bullerwell. “We made bad shots but we never lost a game.”

Winning the Nova Scotia championship qualified the team of Deshpande and Bullerwell for the 2018 Maritime Curling Championship, where more magic awaited.

“We won that too!” said Deshpande, laughing as she recalled her two whirlwind curling victories.

Bullerwell’s time as Deshpande’s teammate was brief. The pair live several hundred kilometres apart – and staying together on the same team was geographically impossible. Deshpande was soon joined by her new curling teammate Sandra Walker, and the pair reached the 2019 Canadian Women’s Stick Curling Championship in Cornwall, P.E.I.

Before that tournament she told Walker, “If we play our game we will win.” And we won it! 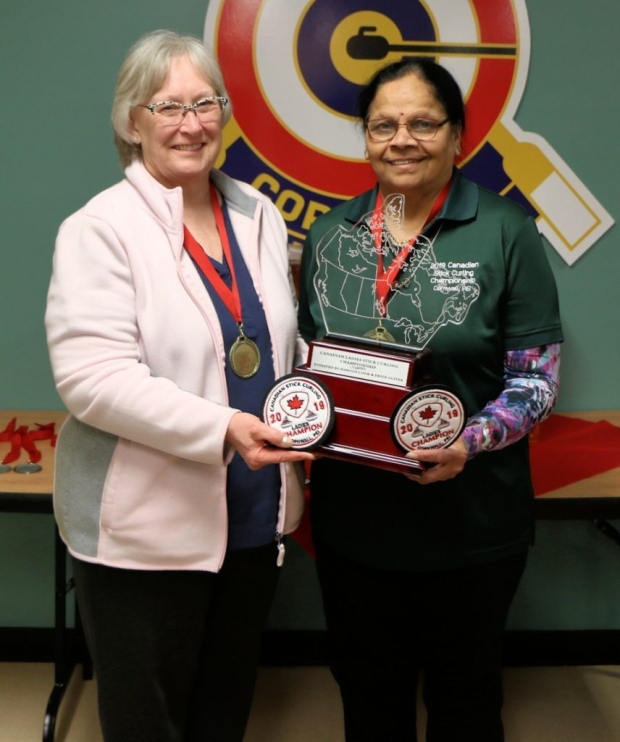 Flashing back almost 37 years, if you had told Deshpande in 1983 that she would one day be a provincial, regional and national champion, she never would have believed it.

Beyond the trophies and the victories, Deshpande says the biggest “win” from curling has not been on the ice – but in life. The sport has helped her build lasting friendships.

“They are the best people I’ve ever met because of curling,” said Deshpande. “They are always there for me.”

“I just find we’re a large Nova Scotia family,” added Bullerwell. “Every time we get together we have lots of laughs, lots of friendships and camaraderie.”

And competing and succeeding in a sport so engrained into the fabric of this country has provided Deshpande with an added layer of feeling that she is now “officially” a Canadian.

She became a Canadian citizen 20 years ago – but the sport of curling has allowed her to achieve a special bond with her adopted homeland.

And a national champion.

“It’s one of the best stories I’ve ever heard for curling,” said Bullerwell.

Curling has made Deshpande a winner on the ice and has allowed her to make best friends in life, in her home country that she calls the best country in the world.