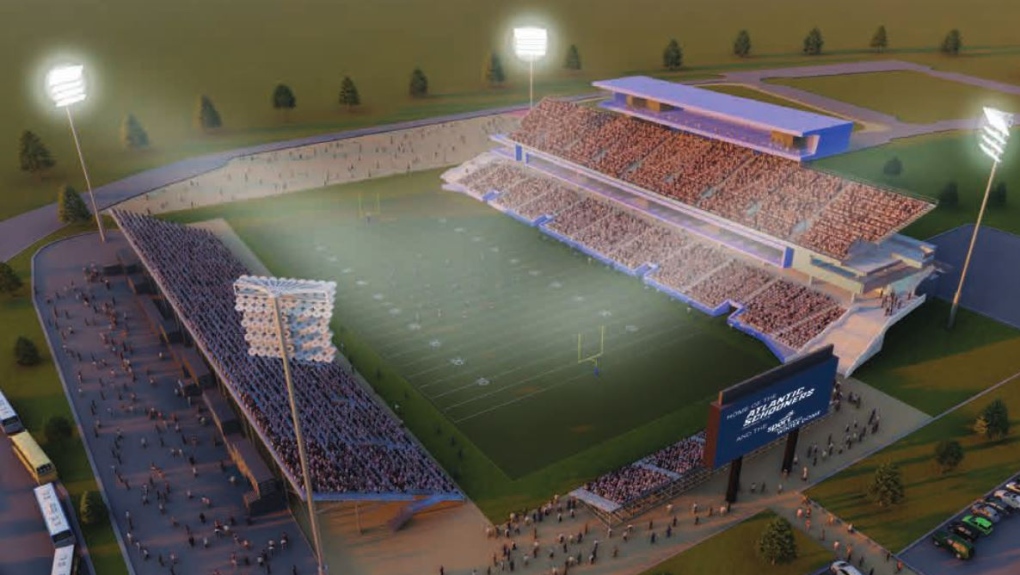 The design for the proposed CFL stadium in Shannon Park is seen. (Schooners Sports and Entertainment)

HALIFAX -- A motion aimed at killing a planned review by Halifax municipal staff of a $110-million stadium proposal by a group hoping to land a CFL franchise has been deferred for two weeks.

Coun. Sam Austin said he brought forward the motion because he's ready to vote now on a proposal submitted by Schooners Sports and Entertainment (SSE), adding he's not comfortable with the funding options presented by the group and would vote against supporting the project.

Austin believes it would make sense to check the pulse of council before the proposal goes to a months-long staff analysis that is expected to be ready by next spring.

"I think it's worth council checking in to see if it's something we want to entertain or not, or whether or not we should part ways now," Austin said prior to Tuesday's council meeting.

"My own sense is that we are so far apart from something that I would see as reasonable, that there is not a scenario that I can see coming out of this that I would support."

Halifax Regional Municipal council is made up of 16 councillors and Mayor Mike Savage, and Austin would need 11 members to vote for his motion to rescind the previous direction to city staff, before it could be debated.

However, during Tuesday's meeting Austin asked that his motion be removed from the agenda until the Oct. 22 meeting because of the absence of one council member due to a family emergency.

The venue would be used for football, soccer, rugby, lacrosse and other sports, in partnership with Sport Nova Scotia, when not being used by the CFL. It would include an inflatable dome that would be installed during the winter months.

SSE's proposal outlines funding options including the municipality making an up-front payment of 15 to 20 per cent of the cost. Another option would see annual loan payments of $2 million, with SSE paying $1 million and a ticket surcharge capped at $10 per ticket on all tickets sold for events.

Other options would see HRM making cash payments for 25 per cent of the project over a period of time, totalling about $25 million.

There is also a scenario where HRM would make annual cash payments not covered by the province or SSE.

While it's considered unlikely Austin's motion will get the support needed once it does come before council, he believes there is enough skepticism that the ultimate decision on the stadium proposal will be extremely close.

"Where people all land on this I don't know," Austin said. "My sense from around the room is the overall sentiment on this is pretty lukewarm. Whether that translates into killing it now or later I'm not sure," he said.

This report by The Canadian Press was first published Oct. 8, 2019.