Move to ban fracking would not supersede N.S. law: minister 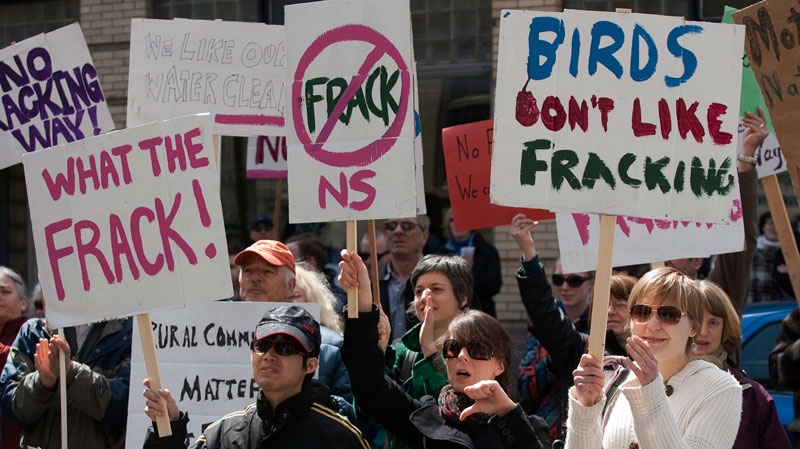 Protesters gather outside the Nova Scotia legislature in Halifax to show their opposition to the use of hydraulic fracturing or fracking, on Friday, April 22, 2011. (Andrew Vaughan / THE CANADIAN PRESS)

HALIFAX -- Any municipal move in Nova Scotia to ban hydraulic fracturing for gas and oil would not supersede provincial authority over mineral rights, a cabinet minister said Tuesday.

Inverness county council in Cape Breton is considering a bylaw that would ban the practice, also known as fracking. The bylaw is expected to receive final reading in March.

But Service Nova Scotia Minister John MacDonell said Tuesday there's a question whether the bylaw would mean anything.

MacDonell's department is responsible for administering the Municipal Government Act, which he said gives the council no authority to make law in areas of provincial jurisdiction.

"Mineral rights fall under provincial government jurisdiction and a municipal bylaw around hydraulic fracturing would not supersede provincial authority," he said.

He called the municipality's move a "moot point" because the province isn't issuing permits and is conducting a technical and policy review of the practice. A decision on whether the province would change its fracking policy as a result of the review is expected in 2014.

He said the county council acted because of uncertainty around whether the area's water would be protected if fracking is allowed.

"If you put your drinking water and your watersheds around a certain area in jeopardy then you are taking some of those (human) rights away," said MacAulay.

MacDonell wouldn't speculate on what the province's response to municipal efforts to stop fracking would be if its policy were to change after the review and the government issued permits to allow the practice.

"And since it's not clear whether Nova Scotia will be allowing any hydraulic fracturing it's purely hypothetical as to whether or not it would wind up in court," he added.

Toronto-based Petroworth Resources has plans to drill a 1,200-metre vertical exploratory well on the western side of Lake Ainslie in the county, but the company has repeatedly said its permit does not include fracking.

Still, the proposal has sparked many protests including several pickets at the Canso Causeway.

Inverness county has been holding a series of consultations to gauge local public opinion on fracking.