N.B. man alive thanks to AED placed nearby because of friend's father 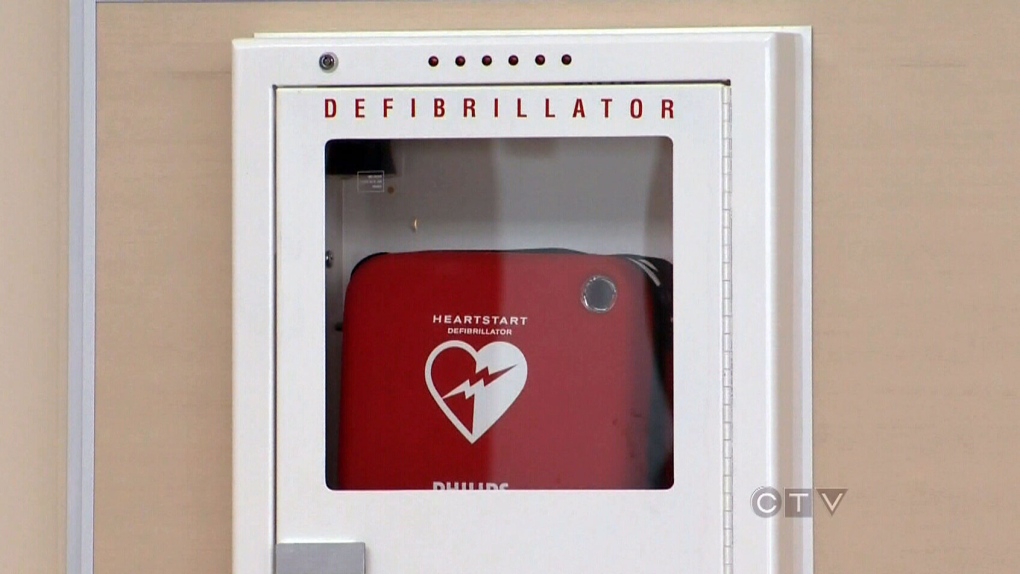 MIRAMICHI, N.B. -- A New Brunswick man is alive thanks to some quick-thinking bystanders and a public-access life-saving machine that was nearby only through a strange twist of circumstance.

Eugene Manuel, 46, was competing in a fitness challenge at his local gym in Miramichi on July 11 when his heart suddenly stopped beating.

He collapsed, and bystanders began performing CPR. One sprinted to the Tim Horton's next door, remembering there was an automatic external defibrillator, or AED, inside.

The bystanders used the machine to re-start Manuel's heart before paramedics arrived to take over, and he has now made a full recovery.

Manuel attended an event Friday in the same gym where he collapsed to highlight the importance of having AEDs in public places.

"If it wasn't for that, I wouldn't be here," he said. "That, and the quick thinking of the people surrounding me.

"We need to get more of these machines for the public."

"I'm very grateful that they had an AED there before it was needed, because oftentimes you get an AED after an event, and you end up too late. You have an AED, but it wasn't there when you needed it," Danielle said.

Such a scenario is why the life-saving machine was put there in the first place. It was in honour of local man Pat O'Kane, who suffered a cardiac arrest in downtown Miramichi six years prior, when there was no defibrillator in the area.

"If there had been one (then) my father would probably be here right now, for sure," said his daughter Cailin O'Kane.

Coincidentally, she was competing with Manuel in the fitness competition when he had his cardiac arrest.

"Even myself, I didn't understand how much they are important to somebody's life until I seen it actually happen," O'Kane said.

She said her father would be glad to know it was in part because of him that Manuel survived.

"I think defibrillators should be put all around the place, whether it's a school, or a store, or a big business, doesn't matter where it is, they save lives and they should be here," she said.

According to a spokesperson for Ambulance New Brunswick, the survival rate for out of hospital cardiac arrests skyrockets from five per cent to 75 per cent if an AED is used during the event.

There are currently about 350 AEDs available to the public in New Brunswick, thanks to the province's Public Access Defibrillation program.

Danielle Manuel hopes that number will grow, allowing more residents to survive heart attacks and recover as her husband has.